Cold turkey. Meaning The sudden and complete withdrawal from an addictive substance and/or the physiological effects of such a withdrawal. 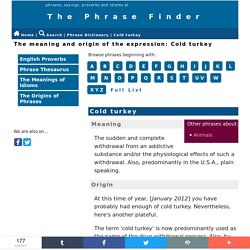 Also, predominantly in the U.S.A., plain speaking. Origin At this time of year, [January 2012] you have probably had enough of cold turkey. Nevertheless, here's another plateful. The term 'cold turkey' is now predominantly used as the name of the drug withdrawal process. The turkey looms large in the American psyche because of its link to early European colonists and is, as even Limies like me know, the centrepiece of the annual Thanksgiving meal. I've heard [Reverend Billy] Sunday give his 'Booze' sermon, and believe me that rascal can make tears flow out of a stone. The English newspaper The Daily Express introduced the phrase to an English audience in a January 1928 edition: What does take a rain check mean? What's the definition of take a rain check? Eighty-six. Restaurant lingo meaning "take an item off the menu. 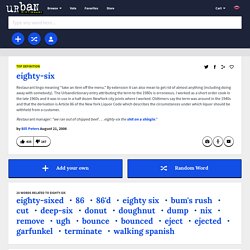 " By extension it can also mean to get rid of almost anything (including doing away with somebody). The Urbandictionary entry attributing the term to the 1980s is erroneous. I worked as a short order cook in the late 1960s and it was in use in a half dozen NewYork city joints where I worked. Oldtimers say the term was around in the 1940s and that the derivation is Article 86 of the New York Liquor Code which describes the circumstances under which liquor should be withheld from a customer. Restaurant manager: "we ran out of chipped beef . . . eighty-six the shit on a shingle. " to eighty-six a pregnancy is to medically terminate it, taken from the name of the "abortion drug" RU-486.

A woman might eighty-six a fetus in the earliest weeks of being pregnant, with the help of a health care provider who can administer a brief series of oral dosages. Jenny: I just came up positive on this pregnancy test. Eric: Yo, Kevin. A band from Cape Cod, Ma. "To Thine Own Self Be True." Really? By Nicholas Clairmont "To thine own self be true," says Polonius in Hamlet. 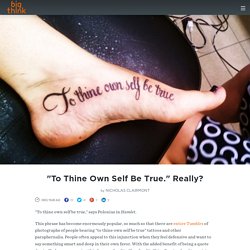 This phrase has become enormously popular, so much so that there are entire Tumblrs of photographs of people bearing "to thine own self be true" tattoos and other paraphernalia. People often appeal to this injunction when they feel defensive and want to say something smart and deep in their own favor. With the added benefit of being a quote due to Shakespeare, saying this faux profundity (fauxfundity?) Is often too hard to resist. Without getting into the details of how well-received men and supposed fools are actually treated in Shakespeare, I will just note that the intent of the author was likely not to represent Polonius as profound, but rather as a blowhard.

"Detection is not just a skill, Watson. 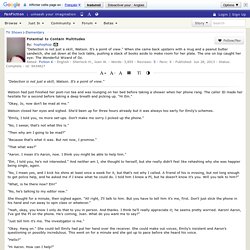 It's a point of view. " Watson had just finished her post-run tea and was lounging on her bed before taking a shower when her phone rang. The caller ID made her hesitate for a second before taking a deep breath and picking up. "Hi Em. " "Okay, Jo, now don't be mad at me. " Watson closed her eyes and sighed. "Emily, I told you, no more set-ups. "No, I swear, that's not what this is. " "Then why am I going to be mad? " Lam - definition of lam by The Free Dictionary. 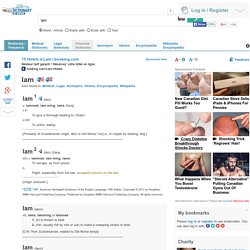 Internet Slang. Internet users have developed many slang terms over the years. 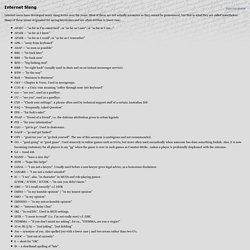 Most of these are not actually acronyms as they cannot be pronounced, but that is what they are called nonetheless. Many of these terms originated for saving keystrokes and are often written in lower case: I haven't the foggiest. English[edit] Alternative forms[edit] Phrase[edit] I haven't the foggiest (simple past I hadn't the foggiest) (idiomatic) I don't know, I haven't a clue (as thoughts clouded by a thick fog). 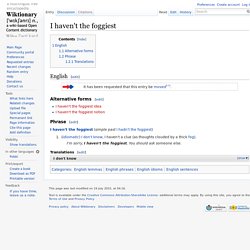