The Renaissance Connection, from the Allentown Art Museum 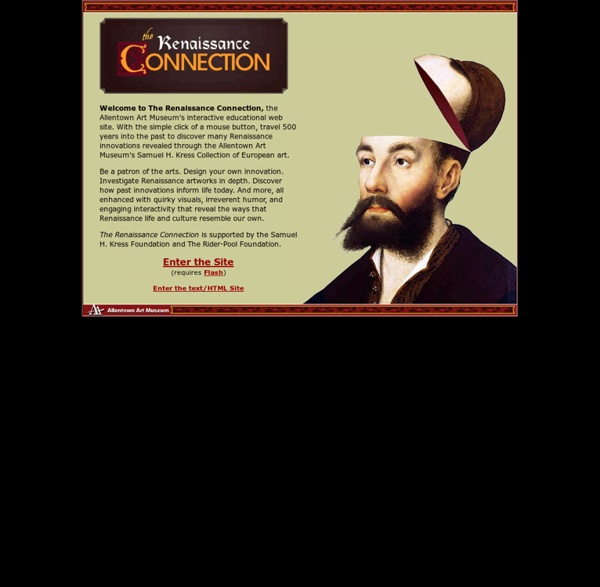 Not Everyone Lived in Castles During the Middle Ages Activity 1. Priests and Monks Review the types of medieval people studied in Activities 1 and 2. Begin group research of this topic by reading together the text found at Religion available through Learner.Org. Now read about medieval monks at Monks and Nuns available through Learner.Org's Middle Ages. Remind the students of the illuminated images they viewed in Activities 1 and 2. The multiple prayer services took place in the church at the abbey, although those monks who were out in the fields simply kneeled and prayed where they were. Assessment Discuss with the students what they have learned about the monks. Activity 2. After reviewing the topics covered in Activity 1, explain that the wealthy people studied thus far represented only a very small fraction of medieval society. Farming You can get a good idea of how the peasants spent their time by viewing the following images from the Book of Hours discussed earlier: Call upon students to describe the activities in each scene. Royalty

Fastest Way to Create Comic Strips and Cartoons - Toondoo The FCC Kids Zone Home Page In March 2010, the FCC delivered to Congress a plan to help make sure that all Americans can get high-speed advanced Internet service – otherwise known as “broadband.” Congress asked the FCC to develop this plan, and the FCC went around the country asking different groups of people for their ideas and opinions before putting the plan together. Broadband Internet service lets you use the Internet and Internet-related services at much higher speeds than traditional modems, like a regular telephone line. The FCC’s National Broadband Plan includes ideas on how to use broadband to help the economy grow, to help create jobs, to help educate children, to help protect the public and to help people participate in government processes and get in touch with government services. The FCC’s Plan includes recommendations to solve these problems. Connect 100 million households to affordable fast broadband service.

medieval Wouldn't it be terrific to travel back in time to explore a castle and see knights in shining armor and beautiful princesses? Just think of all the magnificent sights and heroic tournaments you would witness! But what was it "really" like to live in Medieval Times? In your quest you will discover the world of the feudal system and explore Medieval castles. Your serfdom will begin by watching a few short video clips from the movie Ever After. Are you ready to learn what is kept in a keep, how a morning star is used, or what (besides water) can be found in a moat? Throughout your quest, keep in mind the "big question" you are seeking to answer: What was life "really" like in Medieval Times, and what do we know now that could have made their lives better? Can you believe everything you read on the Internet? After you have completed the activity, go to the Task section to begin your quest. Created by Joan Weathers 6th Grade Teacher North Daviess Elementary School email me

How to Draw Faster - 5 Tips to Improve Drawing Speed By Matt Fussell Artists that have drawn for many years often amaze people by how quickly they can get an image on the drawing surface. Often, what’s equally amazing is the accuracy that accompanies the speed. Unfortunately, when people see this skill, they assume that it is the result of talent, instead of developed skill. Frankly, anyone can draw quickly, but drawing speed without accuracy really misses the whole point. The truth is that knowing a few “secrets” will help to improve your drawing skill and ironically, improve your accuracy as well. Tip #1 - Look For and Draw Basic Shapes Many people first approach drawing by drawing contour lines, or the outlines of the object. Every object can be broken down visually into simple shapes. The tricky part is learning how to see the simple shapes in complex objects. Tip #2 - Make Comparisons within the Picture Plane This technique is mostly helpful for the initial layout of your composition. Tip #3 - Draw with Your Whole Arm

Ancient Civilizations: Maya Global rating average: 0.0 out of 50.00.00.00.00.0 These websites are about the Mayas and their culture. There are lesson plans, maps, timelines, quizzes, and cartoons. There is information about their culture, government, religion, and more. Includes a link to eTheme resources on Native Americans: Maya and Ancient Western Civilizations. Grades Links Maya Kids This fun site has information about the Mayas, their culture, and where they lived. Education Standards Request State Standards

Secrets of Lost Empires | Medieval Siege Welcome to the companion Web site to the NOVA program "Medieval Siege," scheduled for broadcast on January 24, 2006. In the film, which is a part of the NOVA series Secrets of Lost Empires, a team of timber framers and other specialists design, build, and fire a pair of trebuchets, a devastating engine of war popular in the Middle Ages. Here's what you'll find online: Medieval Arms Race The trebuchet was only the most frightening of the weapons early European warriors employed in siege warfare. They also relied on battering rams, siege towers, tunnels - anything to gain access to a castle. Defenders, meanwhile, had a few tricks of their own. Medieval Arms Race | NOVA Builds a Trebuchet | Life in a Castle Destroy the Castle | Resources | Transcript Medieval Siege | Pharaoh's Obelisk | Easter Island | Roman Bath | China Bridge | Site Map NOVA Online | Editor's Picks | Previous Sites | Join Us/E-mail | TV/Web Schedule About NOVA | Teachers | Site Map | Shop | Jobs | Search | To print