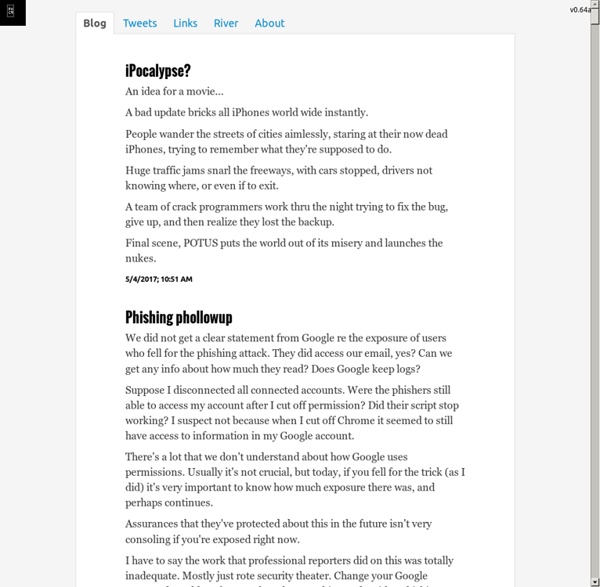 (Meme)X Marks the Spot: Theorizing Metablogging contentious.com — Amy Gahran’s news and musings on how we commun Cabinet Magazine Online - A Timeline of Timelines This is an expanded version of a timeline tha­t appeared in Cabinet's "Histories of the Future" issue. Daniel Rosenberg's introduction to the timeline can be found here. Although we have not been able to preserve the horizontal design, we have added additio­nal entries for this web version. If there are omissions or errors, we'd love to hear from you. Please email Cabinet at this e-mail address. Jewish scholar José ben Halafta calculates the exact length of time between Creation and the destruction of the Second Temple. ca. 325 In his Chronicle, Eusebius of Caesarea innovates a tabular system to coordinate events drawn from several distinct historiographic traditions. ca. 415 Augustine’s allegorical interpretation of the biblical chronology forms a framework for interpreting human history according to the “six ages of man.” Scythian monk Dionysius Exiguus introduces the convention of dating events anno Domini. ca. 530 Rule of St. 10th CENTURY 12th CENTURY 12–13th CENTURY 13th CENTURY ca. 1500 H.

Scarlet Words QuestionCopyright.org Tara’s Weblog www-db.stanford.edu/pub/voy/museum/google.... by Rich Scholes March 2000 Visitors to Google's Mountain View headquarters are passed by pool cue-carrying programmers, greeted by a friendly, jelly-bean-eating assistant and entertained by a monitor that continually scrolls a selection of in-process Google searches. Homegrown on the Farm In the spring of 1995, Google's future co-founders first met at a social outing in San Francisco designed to welcome new applicants to Stanford's computer science doctoral program. Google soon overgrew the bounds of the lab of Page and Brin's principal investigator. And companies were interested. Google Makes Friends Then, in 1998, things heated up. Page turned his dorm room into Google's new home, importing computers to his bedside. Brin and Page gathered money from family and close friends. Bechtolsheim actually catalyzed Google's incorporation. Google's Holiday Cheer: As with most holidays, February 2 brought a visitor. By June 1999, Google made its first press release. As a result, Google is fast!

The Pleasures of Imagination - The Chronicle Review - The Chroni By Paul Bloom How do Americans spend their leisure time? The answer might surprise you. Our main leisure activity is, by a long shot, participating in experiences that we know are not real. This is a strange way for an animal to spend its days. One solution to this puzzle is that the pleasures of the imagination exist because they hijack mental systems that have evolved for real-world pleasure. The capacity for imaginative pleasure is universal, and it emerges early in development. Developmental psychologists have long been interested in children's appreciation of the distinction between pretense and reality. It is an open question how early this understanding emerges, and there is some intriguing experimental work exploring this. Why do we get pleasure from the imagination? The emotions triggered by fiction are very real. These emotional responses are typically muted compared with the real thing. Does this suggest that people believe, at some level, that the events are real?

Wiki History This began on March 25, 1995. A little later (May 1, 1995), an InvitationToThePatternsList caused an increase in participation. Growth has continued since then, to the point where the average number of new pages ranges between 5 and 12 per day. Landmark changes to the Wiki script - approximate dates; please put correct dates if you know them. 1996 EditCopy 1998 Perl5 dbm binding 1999 Denial-of-service protection logic 1999 Remote index for search 2000 Update conflict detection (EditConflictResolution) 2000 UserName 2000 QuickChanges 2000 NewNotification 2000 LikePages, VisualTour 2000 PageDeletion 2001 SisterSites 2001? I recently stumbled across this early description of the c2.com server with hit statistics for the first three years of operation. Page Hits In 1995, I started keeping wiki pages in a directory that let them show up in the disk-usage (du) statistics that I collected about once a year. 2004-2005: Thread Drift Proponents of ChatterForTheSakeOfChatter?

Granta Magazine Declaration of Independence When in the Course of human events, it becomes necessary for one people to dissolve the political bands which have connected them with another, and to assume among the powers of the earth, the separate and equal station to which the Laws of Nature and of Nature’s God entitle them, a decent respect to the opinions of mankind requires that they should declare the causes which impel them to the separation. We hold these truths to be self-evident, that all men are created equal, that they are endowed by their Creator with certain unalienable Rights, that among these are Life, Liberty, and the pursuit of Happiness. That to secure these rights, Governments are instituted among Men, deriving their just powers from the consent of the governed. Such has been the patient sufferance of these Colonies; and such is now the necessity which constrains them to alter their former Systems of Government. He has refused his Assent to Laws, the most wholesome and necessary for the public good. New Hampshire:

swissmiss Ancient Human Footprint About 20,000 years ago, humans trekked along the margins of a shallow lake in Australia, leaving behind records of their passage in the soft, wet sand. In 2003, an aboriginal woman who is likely a descendant of those early Australians stumbled across dozens of timeworn footprints in the same area. Excavations of the site have since uncovered hundreds more. The discovery, detailed in a recent issue of the Journal of Human Evolution, represents the largest collection of Pleistocene human footprints in the world, and the only footprints from that era ever found in Australia. "The preservation is just remarkable," said study team member Matthew Cupper of the University of Melbourne in Australia. The Pleistocene stretched from about 2 million to 12,000 years ago. A series of climatic upheavals, the worldwide spread of human-like primates, or hominids; The extinction of Neanderthals and large land mammals—including mammoths, giant sloth and saber toothed cats; The rise of modern humans.

They have been pushing the line. In my opinion, also,
Thanks for bringing this up. by steviesriver Jan 23