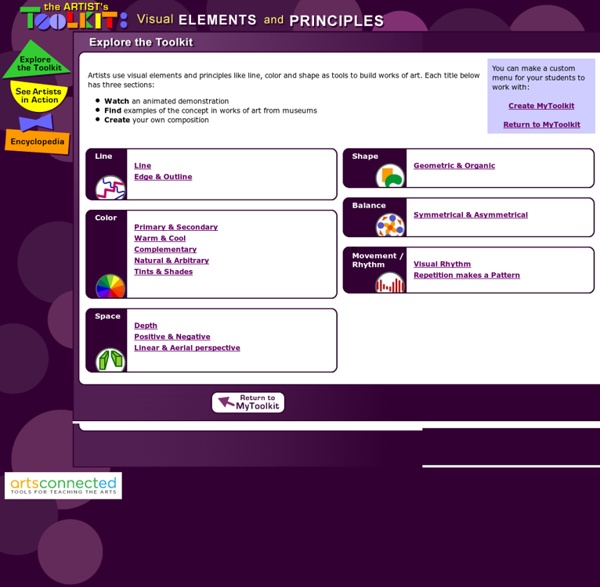 Il sito dedicato alla lingua e alla cultura italiana di Rai International Project ARTiculate Elements of Art (building blocks of visual art) Line Line is the path of a point moving through space. Shape / Form Shape implies spatial form and is usually perceived as two-dimensional. Color Colors all come from the three primaries and black and white. Value Value refers to relative lightness and darkness and is perceived in terms of varying levels of contrast. Texture Texture refers to the tactile qualities of a surface (actual) or to the visual representation of such surface qualities (implied). Space / Perspective Space refers to the area in which art is organized. Principles of art (use or arrangement of the building blocks of visual art) Pattern Pattern refers to the repetition or reoccurrence of a design element, exact or varied, which establishes a visual beat. Rhythm / Movement Rhythm or movement refers to the suggestion of motion through the use of various elements. Proportion / Scale Proportion is the size relationship of parts to a whole and to one another. Balance Unity Emphasis

Sito dedicato ai corsisti LIM della scuola Belli di Roma Art History The history of Art is long and varied, spanning tens of thousands of years from ancient paintings on the walls of caves to the glow of computer-generated images on the screens of the 21st century. "The role of art is to make a world which can be inhabited" - William Saroyan Preface - What Is Art? A discussion of what art is and can be, and what we mean by "art history" - a brief summary of the book. Prehistoric Art Aboriginal art works, European "cavemen" artworks such as the drawings at Lascaux and Cauvet. Ancient Art Egyptian, Greek and Roman (including Early Christian) Art, and their effects on the development of Art. Medieval Art Artworks from the European Middle Ages, including Gothic Art and Panel Painting. The Renaissance Including such artists as Leonardo da Vinci and Michelangelo. The 18th Century All major artworks, movements and artists from the 18th Century, including the Rococo movement and Neoclassicism. The 19th Century The 20th Century Glossary and Theory Authors and Contributors