Script Me! English français deutsch 日本語 What is this? 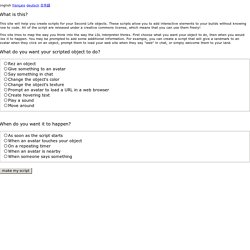 This site will help you create scripts for your Second Life objects. These scripts allow you to add interactive elements to your builds without knowing how to code. All of the script are released under a creative commons license, which means that you can use them freely! This site tries to map the way you think into the way the LSL interpreter thinks. 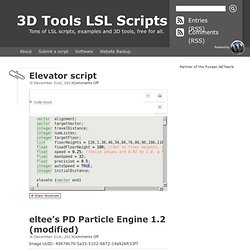 So the script submit form is gone and it is also not possible to post comments or questions any more. I can be contacted in-world if you really need to. I’ve always been wondering about the ideal system requirements for running a sim on a server and I may have found a somewhat clear answer at the OSGrid forum. ( ) It is an article from 2008, but most likely still suitable today. Richard Senior said: The bottleneck on any server used for OpenSim is almost always the avalibility of RAM. Scripting Snippets, 7: Creating a HUD « A View From Another Life. This is going to be a long one. 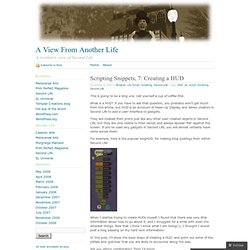 Get yourself a cup of coffee first. What is a HUD? If you have to ask that question, you probably won’t get much from this article, but HUD is an acronym of Head-Up Display, and allows creators in Second Life to add a user-interface to gadgets. They are created from prims just like any other user-created objects in Second Life, but they are only visible to their owner, and always appear ‘flat’ against the screen. If you’ve used any gadgets in Second Life, you will almost certainly have come across them. For example, here is the popular blogHUD, for making blog postings from within Second Life: When I started trying to create HUDs myself, I found that there was very little information about how to go about it, and I struggled for a while with even the simplest things.

In this post, I’ll show the basic steps of creating a HUD, and point out some of the pitfalls and ‘gotchas’ that you are likely to encounter along the way. Are you sitting comfortably? Yuk. Really really heavily commented vehicle script. I decided to make a flying car a bit back, but even with a few sample scripts i couldnt figure out how to make it fly like i wanted it to. mostly because i didnt know what i was doing or what all the functions wee supposed to be doing. so i started from scratch and wrote a new script with descriptions of what each function does and what that means. i hope this helps anyone else working on vehicles. if you use this script it will fly reasonable well as it is, more of a hover type flight than an airplane, but needs quite a bit of tweaking before i would say it flies really well. if there is some grievous error somewhere in it please let me know, im not the best scripter and this was my first attempt at a vehicle. vector linear = <0, 0, 0> ; // declare the value for the linear motorvector angular = <0, 0, 0> ; // declare the value for the angular motor default{ state_entry() { // what the pie menu says if you want to get in llSetSitText("Drive") ; on_rez(integer param) { llResetScript(); } 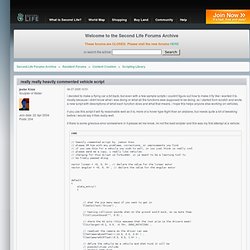