(19) The Net Ninja. How to annotate literally everything. I won't go into Instapaper's readability capabilities (e.g. fonts and article formatting) because it's not something I care much about, so you might be better off googling that for yourself, here I'll concentrate on annotating aspect. 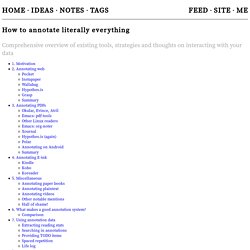 Here are couple of recent extensive comparisons of Instapaper and Pocket, which feature screenshots and other aspects of Instapaper: So, to read something in Instapaper, first you'll have to import the article into it (to unclutter and optimize it for reading). Due to this import process, you can only read and highlight in Instapaper's app, and you can only see your highlights there as well, which is its main limitation for me. The only reason I'm using it at all is that its Android app has got offline capabilities, so I would export to Instapaper things I want to read on the tube while I don't have connection and read/comment while offline.

Mind that free version of Instapaper has got 5 notes per month limit. Clojure — Treat code as data [Pirates of the JVM] We are sailing across the Functional Ocean and you should be able to see Clojure clearly now. 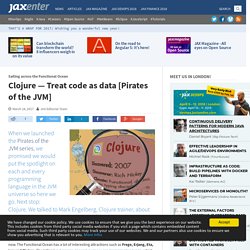 The Functional Ocean has a lot of interesting attractions such as Frege, Erjang, Eta, Lux and Clojure. The latter is a dynamic, general-purpose programming language, which combines the approachability and interactive development of a scripting language with an efficient and robust infrastructure for multithreaded programming. In short, it treats code as data. Click on the map to see the entire infographic. FreeCodeCamp. Let’s Enhance! How we found @rogerkver’s $1,000 wallet obfuscated private key. Free Online IDE and Terminal. CyberChef. Download CyberChef file_download Last build: 14 days ago - New in v8: Automated encoding detection and simplified operation building Options settings About / Support help Operations Favourites. 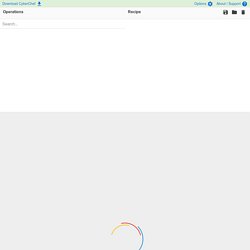 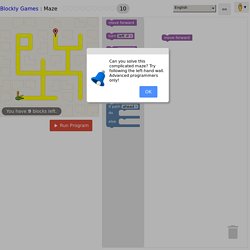 Are you ready for the next challenge? Save and link to blocks.Run the program you wrote.Run ProgramStop the program and reset the level.ResetHelpOKCancelLogicLoopsMathTextListsColourVariablesFunctionsThere was a problem with the request.Share your blocks with this link: %1Sorry, '%1' doesn't correspond with any saved program.Could not load your saved file. Perhaps it was created with a different version of Blockly? Listtext move forwardturn leftturn rightdoelseIf-else blocks will do one thing or the other.if path aheadif path to the leftif path to the rightrepeat untilMoves the player forward one space.Turns the player left or right by 90 degrees.If there is a path in the specified direction, \nthen do some actions.

This level is extremely difficult. Start with Code – Google. Code.org. 5 Simple Coding Languages To Learn For First-Time Learners. This are the five simple coding languages for the first-time programmers Programming is one of the best career choices in today’s world as more and more services are shifting online. 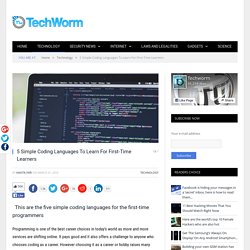 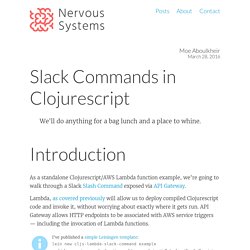 Lambda, as covered previously will allow us to deploy compiled Clojurescript code and invoke it, without worrying about exactly where it gets run. API Gateway allows HTTP endpoints to be associated with AWS service triggers — including the invocation of Lambda functions. ClojureDocs - Community-Powered Clojure Documentation and Examples. Read Read-Eval-Print-λove. A note Read-Eval-Print-Love is an N-monthly zine of original content and curation about the Lisp family of programming languages and little-languages in general. 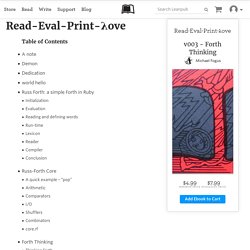 Demon One day a hopeful macrolyte approached the master macrologist Pi Mu and asked a question: CIDER: The Clojure Interactive Programming Environment that Rocks. Teach Yourself How To Code In These 10 Simple Steps. These 10 steps will help you learn coding easily Everyone wants to be a coder these days. 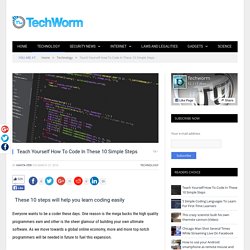 One reason is the mega bucks the high quality programmers earn and other is the sheer glamour of building your own ultimate software. As we move towards a global online economy, more and more top notch programmers will be needed in future to fuel this expansion. Lets start with the basics. Community-Powered Clojure Documentation and Examples. Learn Clojure. Archives. Marginalia. An invitation to FP for Clojure noobs. I’ve heard newcomers to Clojure ask how to get started with functional programming. 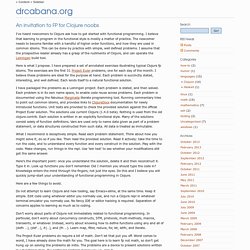 I believe that learning to program in the functional style is mostly a matter of practice. The newcomer needs to become familiar with a handful of higher order functions, and how they are used in common idioms. This can be done by practice with simple, well defined problems. I assume that the prospective reader already has a grasp of the rudiments of Clojure, and can operate the Leiningen build tool. Here is what I propose. I have packaged the problems as a Leiningen project. What I recommend is deceptively simple. Here’s the important point: once you understand the solution, delete it and then reconstruct it. Here are a few things to avoid. Do not attempt to learn Clojure and new tooling, say Emacs+slime, at the same time. Don’t worry about parts of Clojure not immediately related to functional programming.

The Project Euler problems do require a bit of math. The project repository is is available here. Community-Powered Clojure Documentation and Examples. Clojure Scripting - ImageJ. Check out clojure web site and particularly the chapter on Java interoperability. 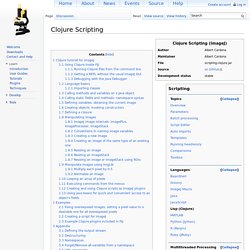 Clojure is not a scripting language: Clojure compiles directly to JVM bytecode, and thus runs at native speed. Thus one must think of Clojure as a true alternative to Java the language, but much more expressive, flexible and powerful. See also: Videos in "Full Disclojure" on Vimeo. Relevance/labrepl. Functional-koans/clojure-koans. Mark Volkmann's Clojure Page. Mark Volkmann's Page This page contains resources related to the Clojure programming language. Article Change History Sounds. Problem Listing. Learning Clojure - What should I know about Java and more. Learn Clojure - Clojure Koans Walkthrough in Light Table IDE. Learn clojure in Y Minutes. Clojure is a Lisp family language developed for the Java Virtual Machine. It has a much stronger emphasis on pure functional programming than Common Lisp, but includes several STM utilities to handle state as it comes up. This combination allows it to handle concurrent processing very simply, and often automatically.

(You need a version of Clojure 1.2 or newer) Further Reading This is far from exhaustive, but hopefully it’s enough to get you on your feet. Clojure.org has lots of articles: Clojuredocs.org has documentation with examples for most core functions: Clojure for the Brave and True. As you read this hilarious book, you will at some point experience a very serious moment. It is the moment you admit to yourself that programming is more enjoyable after knowing some Clojure. It is also the moment that your investment in this book, in money and time, comes back to you—with interest. Humor has a certain relationship to seriousness. Learn Clojure. The Clojure Toolbox. New to Java Programming Center. Java Basics offers a quick overview and the steps to create a 'Hello, World' program. Get Started provides the resources needed to develop applications with Java technologies Training includes courses, certifications and package information Connect with the millions of existing Java professionals via conferences, blogs and more.