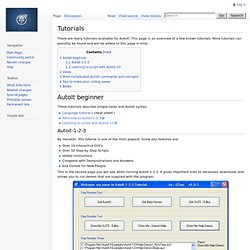 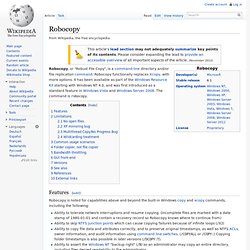 (incomplete files are marked with a date stamp of 1980-01-01 and contain a recovery record so Robocopy knows where to continue from)Ability to skip NTFS junction points which can cause copying failures because of infinite loops (/XJ)Ability to copy file data and attributes correctly, and to preserve original timestamps, as well as NTFS ACLs, owner information, and audit information using command line switches. Limitations[edit] No open files[edit] Robocopy will not copy open files. The Windows Volume Shadow Copy service is used for such situations, but Robocopy does not use it. XP mirroring bug[edit] Robocopy versions on systems older than Windows Vista do not mirror properly. Multithread Copy/No Progress Bug[edit] How To Read Command Syntax. The syntax of a command is basically the rules for running the command. 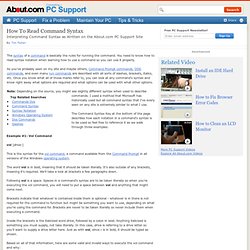 You need to know how to read syntax notation when learning how to use a command so you can use it properly. As you've probably seen on my site and maybe others, Command Prompt commands, DOS commands, and even many run commands are described with all sorts of slashes, brackets, italics, etc. Xcopy Command Details and Examples. What is the Xcopy Command? 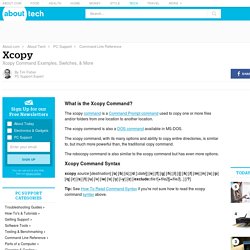 The xcopy command is a Command Prompt command used to copy one or more files and/or folders from one location to another location. The xcopy command is also a DOS command available in MS-DOS. Xcopy commands. How to create a command-line toolkit for Windows. If you are a system administrator, IT professional, or a power user it is common to find yourself using the command prompt to perform administrative tasks in Windows. Whether it be copying files, accessing the Registry, searching for files, or modifying disk partitions, command-line tools can be faster and more powerful than their graphical alternatives.

This tutorial will walk you through creating a command-line toolkit that contains useful programs and utilities that can make administering and using your computer easier and more efficient. The tutorial will also walk you through configuring your PATH environment variable so that these tools are available whenever you need them without having to specify the complete path to your toolkit folder. Batch script to delete file older than 30 day [Solved] We want to move ( not DELET ) log files after every 5 minutes form one location to another. 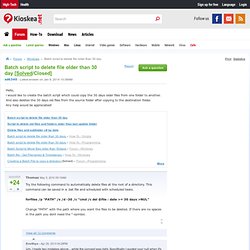 But also we do not want to move the log file which is currently active. Means we want to move the logfiles which are 5 minutes older than System Date. Can we get the Windows Script for the same, which we can use in the windows scheduler. Hi Ami: Windows Batch Scripting. This book describes the Microsoft-supplied command interpreter on Windows NT, Windows XP, Windows Vista, Windows 7 and later, which is cmd.exe. 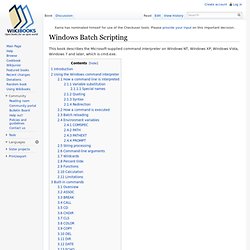 Introduction[edit] This book addresses 32-bit Windows commands applicable to modern versions of Windows based on the Windows NT environment. It does not address commands that are specific to DOS environments and to DOS-based operating systems, such as Windows 95, Windows 98, and Windows Me, whose Microsoft-supplied command interpreters are in fact DOS programs, not Win32 programs. Shay Levy. I’m a Microsoft MVP… Again June 30, 2013 It's that time of the year which feels like having a second birthday. 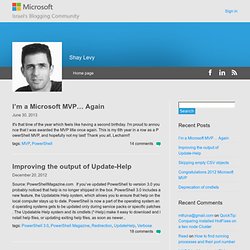 I'm proud to announce that I was awarded the MVP title once again. Re: Help and advice on parsing a text file. Re: parsing csv with biterscripting. AutoIt - AutoItScript. AutoIt v3 is a freeware BASIC-like scripting language designed for automating the Windows GUI and general scripting. 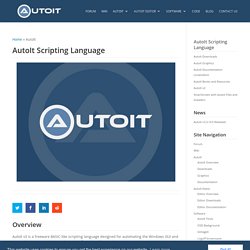 While you have stumbled on KimGentes.com, you might be coming for a few different reasons. 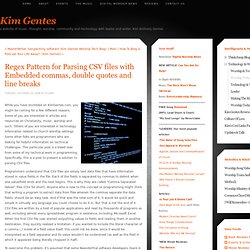 Some of you are interested in articles and resources on Christianity, music, worship and such. Others of you are interested in technology information related to church worship settings. Some other folks are programmers who are looking for helpful information on technical challenges. This particular post is a bleed over from some of my technical work in programming. Specifically, this is a post to present a solution to parsing CSV files. Programmers understand that CSV files are simply text data files that have information stored in value fields in the file.

To overcome this problem, it's assumed that some Neanderthal software developers (back in the Jurassic era of programming) came up with an idea to allow programs to insert and read commas inside of comma separated fields. Regex maybe the most popular language in the programming world. BiterScripting. Using cURL to Read the Contents of a Web Page.

Recently I wrote about how to use the Yahoo! 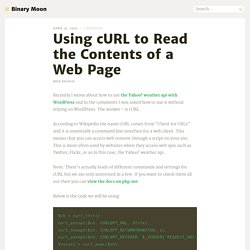 Weather api with WordPress and in the comments I was asked how to use it without relying on WordPress. The answer – is cURL. According to Wikipedia the name cURL comes from “Client for URLs” and it is essentially a command line interface for a web client. This means that you can access web content through a script on your site. This is most often used by websites when they access web apis such as Twitter, Flickr, or as in this case, the Yahoo! Note: There’s actually loads of different commands and settings for cURL but we are only interested in a few. Below is the code we will be using: $ch = curl_init(); curl_setopt($ch, CURLOPT_URL, $file); curl_setopt($ch, CURLOPT_RETURNTRANSFER, 1); curl_setopt($ch, CURLOPT_REFERER, $_SERVER['REQUEST_URI']); $result = curl_exec($ch); curl_close($ch);

Scraping, scripting, hacking – various bits // blog. July 7, 2009 I just finished my talk at Mashed Library 2009 – an event for librarians wanting to mash and mix their data. My talk was almost definitely a bit overwhelming, judging by the backchannel, so I thought I’d bang out a quick blog post to try and help those I managed to confuse.