The Roman Army: The Hyginus Camp. Introduction Hyginus Gromaticus, or Pseudo-Hyginus as he is also called, wrote sometime in the last half of the second century, between the reigns of Trajan and Septimius Severus. 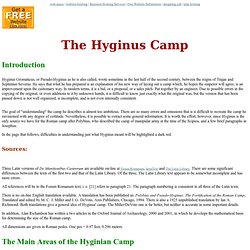 He says that what he has prepared is an explanation of his new way of laying out a camp which, he hopes the emperor will agree, is an improvement upon the customary way. In modern terms, it is a bid, or a proposal, or a sales pitch. Put together by an engineer. Due to possible errors in the copying of the original, or even additions to it by unknown hands, it is difficult to know just exactly what the original was, but the version that has been passed down is not well organized, is incomplete, and is not even internally consistent. Wikideep (IT) - De munitionibus castrorum. Intratext (Eulogos) - De munitionibus castrorum. Wikipedia - De munitionibus castrorum. De Munitionibus Castrorum (About the Fortifications of Military Camps) is a work by an unknown author. 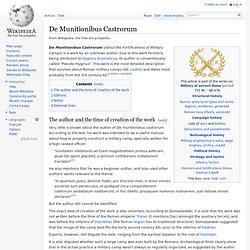 Due to this work formerly being attributed to Hyginus Gromaticus, its author is conventionally called "Pseudo-Hyginus". This work is the most detailed description that survives about Roman military camps (lat. castra) and dates most probably from the 3rd century AD. [citation needed] The author and the time of creation of the work[edit]