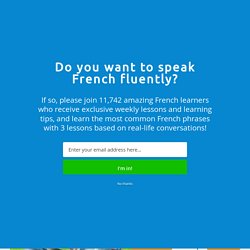 As unrealistic as it sounds, it actually happened to a friend of mine. To avoid (hilarious) mistakes, here are 13 sentences and words you should never say in French. Unless you really want to feel awkward of course. 1. Tu es bonne Kirill Kedrinski/123rf.com Congratulating your friends is a good idea, but you need to be careful when you do it in French. “Tu es bonne”, said to a girl will often be interpreted as “you are good…in bed”, and that’s the most polite interpretation. So if you ever want to congratulate a female friend, don’t forget to clearly explain what your friend is good at. Or simply avoid this sentence and use the safer “tu es doué(e)” (you are gifted). Wouah, elle est bonne ta soeur ! Check out Bien vs Bon: Which One Should You Use? 2. connard/ canard French learners often mistake “canard” and “connard”. 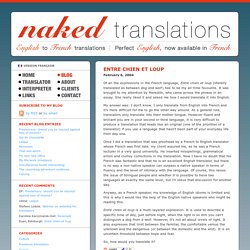 It was brought to my attention by Meredith, who came across the phrase in an essay. She really liked it and asked me how I would translate it into English. My answer was: I don't know. I only translate from English into French and it's more difficult for me to go the other way around. Once I did a translation that was proofread by a French to English translator whose French was first rate, my client assured me, as he was a French lecturer in a very good university.

Anyway, as a French speaker, my knowledge of English idioms is limited and this is why I would like the help of the English native speakers who might be reading this. Entre chien et loup is a multi-layered expression. So, how would you translate it? Salut Céline, Or some other metaphor, entirely lacking in bark. 2) Friend or Foe. 3) Let sleeping dogs lie. The gloaming! Pinterest. Pinterest. Pinterest. French Vocabulary not learned at school: Work and Status - Talk in French. 50 Expressions for Agreeing and Disagreeing in French. [symple_highlight color=”green”]Level: Intermediate[/symple_highlight] [symple_highlight color=”green”]Reading time: 3 minutes[/symple_highlight] French people love to argue or debate so having these little words and expressions can come in handy. These french connectors will help you: – Gain time to elaborate your next sentence or idea. – Make the conversation without any empty silence. – Avoid the syndrome “Did you understand me?”

– Sound more sophisticated. New! If you already have the French Language Package, the files are already available in the folder I shared. To express agreement 20,000+ French words with English translation2,000+ slang terms, and 365 idioms/ colloquial expressions with English translation and example sentences.Follows a logical structure to ensure a smooth learning curve To express disagreement Get the Ultimate French Vocabulary e-book What’s your favorite?