Scripting (Java Programming) Java Script Programming. Scripting language. Primitives are usually the elementary tasks or API calls[clarification needed], and the language allows them to be combined into more programs. 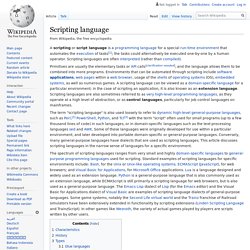 Environments that can be automated through scripting include software applications, web pages within a web browser, usage of the shells of operating systems (OS), embedded systems, as well as numerous games. A scripting language can be viewed as a domain-specific language for a particular environment; in the case of scripting an application, it is also known as an extension language. Scripting languages are also sometimes referred to as very high-level programming languages, as they operate at a high level of abstraction, or as control languages, particularly for job control languages on mainframes. Characteristics[edit] public class HelloWorld { public void printHelloWorld() { System.out.println("Hello World"); }} This piece of code intended to print "Hello World" does nothing as main() is not declared in HelloWorld class. print ("Hello World") 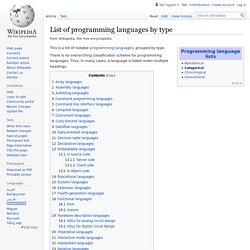 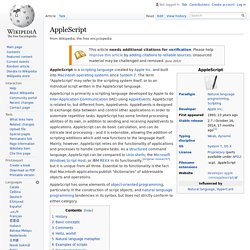 The term "AppleScript" may refer to the scripting system itself, or to an individual script written in the AppleScript language. AppleScript is primarily a scripting language developed by Apple to do Inter-Application Communication (IAC) using AppleEvents. AppleScript is related to, but different from, AppleEvents. AppleEvents is designed to exchange data between and control other applications in order to automate repetitive tasks. AppleScript has some limited processing abilities of its own, in addition to sending and receiving AppleEvents to applications. AppleScript has some elements of object-oriented programming, particularly in the construction of script objects, and natural language programming tendencies in its syntax, but does not strictly conform to either category. AWK. AWK is a programming language designed for text processing and typically used as a data extraction and reporting tool. 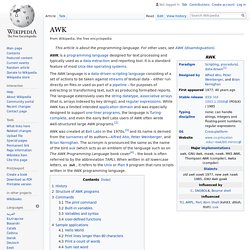 It is a standard feature of most Unix-like operating systems. AWK was created at Bell Labs in the 1970s,[3] and its name is derived from the surnames of its authors—Alfred Aho, Peter Weinberger, and Brian Kernighan. The acronym is pronounced the same as the name of the bird auk (which acts as an emblem of the language such as on The AWK Programming Language book cover[4] – the book is often referred to by the abbreviation TAPL). When written in all lowercase letters, as awk, it refers to the Unix or Plan 9 program that runs scripts written in the AWK programming language. BeanShell. Features[edit] BeanShell supports scripted objects as simple method closures like those in Perl and JavaScript. 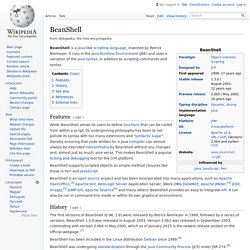 BeanShell is an open source project and has been incorporated into many applications, such as Apache OpenOffice,[3] Apache Ant, WebLogic Server Application Server, jWork.ORG DataMelt, Apache JMeter,[4] jEdit, ImageJ,[5] JUMP GIS, Apache Taverna[6] and many others. BeanShell provides an easy to integrate API. It can also be run in command-line mode or within its own graphical environment. Bash (Unix shell) When a user presses the tab key within an interactive command-shell, Bash automatically uses command line completion to match partly typed program names, filenames and variable names. 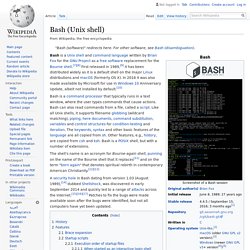 The Bash command-line completion system is very flexible and customizable, and is often packaged with functions that complete arguments and filenames for specific programs and tasks. Bash supports here documents. Since version 2.05b Bash can redirect standard input (stdin) from a "here string" using the <<< operator. $ declare -A a # declare an associative array 'a' faking a bi-dimensional indexed array$ i=1; j=2 # initialize some indices$ a[$i,$j]=5 # associate value "5" to key "$i,$j" (i.e. "1,2")$ echo ${a[$i,$j]} # print the stored value at key "$i,$j"5 Brace expansion, also called alternation, is a feature copied from the C shell. Ch (computer programming) Ch supports the 1999 ISO C Standard (C99) and C++ classes. 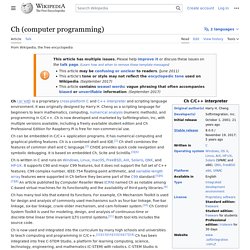 It is a superset of C with C++ classes. Several major features of C99 are supported, such as complex numbers, variable length arrays (VLAs), IEEE-754 floating-point arithmetic, and generic mathematical functions. The specification for wide characters in Addendum 1 for C90 is also supported. CLIST. CLIST (Command List) (pronounced "C-List") is a procedural programming language for TSO in MVS systems. 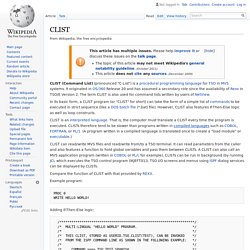 It originated in OS/360 Release 20 and has assumed a secondary role since the availability of Rexx in TSO/E Version 2. The term CLIST is also used for command lists written by users of NetView. CLIST is an interpreted language. That is, the computer must translate a CLIST every time the program is executed. CLISTs therefore tend to be slower than programs written in compiled languages such as COBOL, FORTRAN, or PL/1.

CLIST can read/write MVS files and read/write from/to a TSO terminal. Compare the function of CLIST with that provided by REXX. Example program: Adobe ColdFusion. Adobe ColdFusion is a commercial rapid web application development platform created by JJ Allaire in 1995.[1][2][3][4] (The programming language used with that platform is also commonly called ColdFusion, though is more accurately known as CFML.) 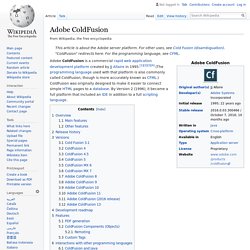 ColdFusion was originally designed to make it easier to connect simple HTML pages to a database. ECMAScript. History[edit] The ECMAScript specification is a standardized specification of a scripting language developed by Brendan Eich of Netscape; initially it was named Mocha, later LiveScript, and finally JavaScript.[3] In December 1995, Sun Microsystems and Netscape announced JavaScript in a press release.[4] In March 1996, Netscape Navigator 2.0 was released, featuring support for JavaScript. 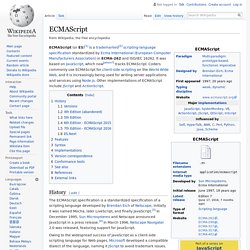 Owing to the widespread success of JavaScript as a client-side scripting language for Web pages, Microsoft developed a compatible dialect of the language, naming it JScript to avoid trademark issues. JScript added new date methods to alleviate the Year 2000 problem caused by the JavaScript methods that were based on the Java Date class.[5] JScript was included in Internet Explorer 3.0, released in August 1996. While both JavaScript and JScript aim to be compatible with ECMAScript, they also provide additional features not described in the ECMA specifications.[8] Versions[edit] ActionScript. ActionScript is an object-oriented programming language originally developed by Macromedia Inc. (since merged into Adobe Systems). It is a derivation of HyperTalk, the scripting language for HyperCard.[2] It is now a dialect of ECMAScript (meaning it is a superset of the syntax and semantics of the language more widely known as JavaScript), though it originally arose as a sibling, both being influenced by HyperTalk.

ActionScript is used primarily for the development of websites and software targeting the Adobe Flash Player platform, used on Web pages in the form of embedded SWF files. ActionScript is also used with Scaleform GFx for the development of 3D video game user interfaces and HUDs. Overview[edit] ActionScript was initially designed for controlling simple 2D vector animations made in Adobe Flash (formerly Macromedia Flash). Flash MX 2004 introduced ActionScript 2.0, a scripting language more suited to the development of Flash applications. ECMAScript for XML. E4X is standardized by Ecma International in the ECMA-357 standard. The first edition was published in June 2004, the second edition in December 2005. The E4X standard was deprecated by the Mozilla Foundation in 2014.[1] JavaScript. JavaScript (/ˈdʒɑːvəˌskrɪpt/[5]) is a high-level, dynamic, untyped, and interpreted programming language. It has been standardized in the ECMAScript language specification.

Alongside HTML and CSS, it is one of the three core technologies of World Wide Web content production; the majority of websites employ it and it is supported by all modern Web browsers without plug-ins. JavaScript is prototype-based with first-class functions, making it a multi-paradigm language, supporting object-oriented,[8] imperative, and functional programming styles. It has an API for working with text, arrays, dates and regular expressions, but does not include any I/O, such as networking, storage, or graphics facilities, relying for these upon the host environment in which it is embedded. JScript. JScript is Microsoft's dialect of the ECMAScript standard[2] that is used in Microsoft's Internet Explorer. JScript is implemented as an Active Scripting engine. This means that it can be "plugged in" to OLE Automation applications that support Active Scripting, such as Internet Explorer, Active Server Pages, and Windows Script Host.[3] It also means such applications can use multiple Active Scripting languages, e.g., JScript, VBScript or PerlScript.

JScript was first supported in the Internet Explorer 3.0 browser released in August 1996. Its most recent version is JScript 9.0, included in Internet Explorer 9. JScript 10.0[4] is a separate dialect, also known as JScript .NET, which adds several new features from the abandoned fourth edition of the ECMAScript standard. Comparison to JavaScript[edit] CMS EXEC. CMS EXEC, or EXEC, is an interpreted, command procedure control, computer scripting language used by the CMS EXEC Processor supplied with the IBM Virtual Machine/Conversational Monitor System (VM/CMS) operating system. EXEC was written in 1966 by Stuart Madnick at MIT on the model of CTSS RUNCOM. He originally called this processor COMMAND, and it was later renamed EXEC.[1] CMS EXEC has been superseded by EXEC 2 and REXX.