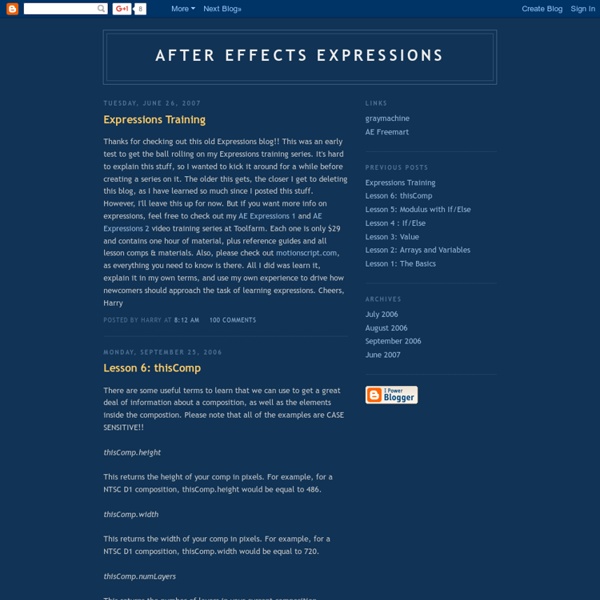 Dan Ebberts's Expressioneering Design Guide There are different ways to approach this, but here we'll focus on creating an opacity expression that can detect when a camera can see the layer's front side. In that case we want the opacity to be 100%. We want the opacity to be 0% when the camera can see the back of the layer. Once we have such an expression, we can apply it to layers representing both sides of an object, rotate the back layer 180 degrees on its y axis, and then parent the back layer to the front layer. Then when we rotate the front layer or orbit the camera, we will always see the correct image. We also want this to work even if there is no camera. To make this work we're going to take advantage of one of the expression language's extremely handy (but, unfortunately, somewhat difficult to understand) features - layer space transforms. In this case we will use the toCompVec() transform to convert a vector pointing out of the layer (in the direction of the z axis) into the coordinate system of the camera view.

greyscalegorilla Congratulations to Michael Rinnan for winning the Five Second Project for March. His entry had a great concept and was outfitted with excellent lighting, atmosphere, camera movements and sound design. We wanted to know a little bit more about Michael’s entry, so we asked him a few questions regarding his workflow and the process for creating his winning piece. Where do you work? What is your title? I am a 3D generalist at NFL films in Mt. How did you come up with your concept for the Bright Lights Five Second Project? For my concept, my goal was to come up with a quick story I could tell in 5 seconds. What was the most challenging thing about your project? The most challenging part of this project was honestly the lighting. Tell us a little about how you achieved the zolly (push-pull zoom) effect. To achieve the zolly, I initially mapped out the motion of the motorcycles with a spline and then dropped a camera onto that motion path. What renderer was used?

MotionScript All Things Motion - After Effects Tutorials & Resources CEP 5 Super mega guide: Extending Adobe apps with HTML5+Node.js | // andy hall It’s not that widely known yet, but ever since the CC 2014 updates in June of this year, eight different Adobe tools now support a common extension framework based purely on web technologies. The framework, called CEP 5, uses panels defined in HTML5 backed up with the full power of Node.js. In short: anyone who’s comfortable with Javascript can now customize Adobe tools in unbearably awesome ways: I’ve now built a couple of projects with this, so I thought I’d write up everything you need to get started. CEP 5 Super Mega Guide Series! Part 1: Technical overviewPart 2: Getting startedPart 3: HTML development and debuggingPart 4: Node.js integration (coming soon)Part 5: Host tool integration (coming soon)Part 6: Events (coming soon)Part 7: Packaging and distribution (coming soon) If you’d rather start with the code, here is my sample CEP extension - a self-contained custom extension that implements most of what’s described in this guide. First off is Part 1: Technical overview…

Newton 2.0 - User's Guide Introduction Newton is a 2D physics simulator for Adobe After Effects CS5 or later. Newton interprets 2D layers of the current composition as rigid bodies in a physical world. These bodies can collide with each other, slide, bounce, and react to gravity. Bodies can also be connected to each other using joints. Bodies Newton transforms composition 2D layers (except audio, guide, null and video-disabled layers) into physical objects called bodies. General Properties Type Newton supports the following types of body: static : a non-moving body. kinematic : a body animated in After Effects with keyframes or expression. Body Types (AE/Newton) Density This parameter is used to determine the mass of a non-static body. Density: 2 and 0.5 Friction This parameter is used to make bodies slide along each other. Varying Friction Bounciness This parameter is used to make bodies bounce. Varying Bounciness Color This parameter sets the body color used in the simulation preview. Mesh Precision Mesh Precision Repulsion