The News, Business, Technology, and Art of Animation 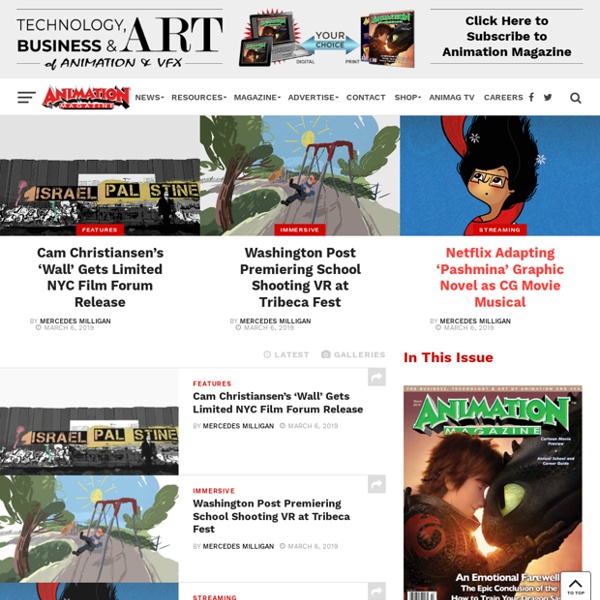 New ‘X-Men: Days of Future Past’ Trailer 20th Century Fox has unveiled another new trailer for its upcoming Marvel extravaganza X-Men: Days of Future Past, which sees First Class director Bryan Singer returning to the helm ... Continue Reading → Skyler Page and Nelson Boles Talk ‘Clarence’ For the April 2014 issue of Animation Magazine, we caught up with first time show creator Skyler Page and creative director Nelson Boles to get the scoop on their upbeat new show Clarence, ... Continue Reading →

Animation The bouncing ball animation (below) consists of these six frames. This animation moves at 10 frames per second. Animation can be recorded with either analogue media, a flip book, motion picture film, video tape, digital media, including formats with animated GIF, Flash animation and digital video. PLEMENTARY ASSETS IN ANIMATION ENTERPRISES:THE MAKING OF ANIMATION INDUSTRY CLUSTER IN SHENZHEN WANG Ji-ci,MEI Li-xia,XIE Kun-ze (College of Urban and Environmental Studies,Peking University,Beijing 100871,China) Animation industry makes high profit in developed economies,while in China it's the opposite.With the concept of complementary assets,this paper explains the business models and the characteristics of Hollywood and Akihabara's animation industries,and illustrates the failure of Thru the Moebius Strip,the product created in 2001 in Shenzhen and the success of Shenzhen National Cartoon and Animation Industry Base setting up in 2006.The paper analyzes the problems of Shenzhen animation industry,and finds out that lack of complementary assets is one of the primary factors puzzling Chinese animation industry development. The paper concludes that to shape local complementary assets include internal and external ones is a possible way to upgrade local animation industry of China.

Character Animation BFA Only The Program in Character Animation is designed for students who seek an understanding of the art of character performance and storytelling in animation. It provides comprehensive artistic and technical training to help each student develop as a fully-fledged animation artist within both the traditional and computer-generated (CG) animation environments. To best instruct, guide and mentor students, the program features a faculty of experienced professionals who work at the forefront of traditional, CG and independent animation. The first year of the program’s intensive four-year curriculum is devoted to courses in life drawing, color and design, storytelling and character animation—both traditional and CG.

Comic Books Are Still Made By Men, For Men And About Men To say the comic book industry has a slight gender skew is like saying Superman is kind of strong. Comic books — much like the film industry they now fuel — vastly under-represent women. The people who write comic books, particularly for major publishers, are overwhelmingly men. The artists who draw them are, too. The characters within them are also disproportionately men, as are the new characters introduced each year.

North Dallas High School mural contest recalls famous grad, animator Tex Avery Tex Avery's cartoons were funny 70 years ago, and they're still funny today. Avery created the wise-cracking Bugs Bunny and awarded him the signature, "Eh, what's up, doc?" He first heard the line at North Dallas High, where he graduated with the Class of 1926. Standing in the cavernous hallways, one can almost hear Roaring '20s teenagers passing one another during class changes. "Hiya, doc." "What's new, doc?" Comics The history of comics has followed divergent paths in different cultures. Some scholars have posited a pre-history as far back as the Lascaux cave paintings. By the mid-20th century, comics flourished particularly in the United States, western Europe (especially in France and Belgium), and Japan.

Open Season Diary: Animating the Animals From the AWN/VFXWorld Exclusive Open Season Diaries. Imageworks animators were given the ability to refine poses and sculpt the silhouettes with special shapers, which were built into the surface of a character. All images © Sony Pictures Ent. Directors Jill Culton, Roger Allers and Anthony Stacchi knew they would have to push the boundaries of animation in order to get desired performances they envisioned for Boog, Elliot and the entire cast of creatures that inhabit the town and forest of Timberline. 10 Ways to Create Comics Online Creating cartoons and comic strips can be a good way to get reluctant writers writing. While creating comics you and your students can work through the elements of fiction in a context that is fun and familiar to them. Witty Comics provides a simple platform that students can use to create two character dialogues. To use Witty Comics students just need to select the pre-drawn background scenes and the pre-drawn characters they want to feature in their comics.