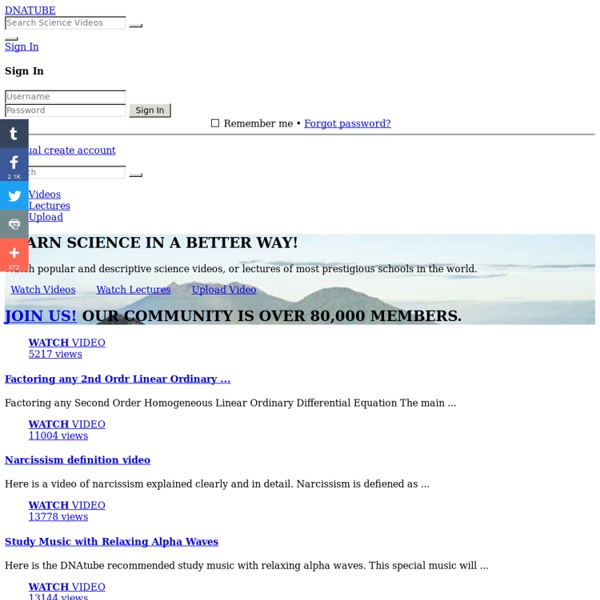 Free Digital Textbook Initiative About Us Additional Options "From government to non-profit organizations, teachers to textbook publishers, we all have a role to play in leveraging 21st century technology to expand learning and better serve California's students, parents, teachers and schools. This initiative will ensure our schools know which digital textbooks stand up to California's academic content standards - so these cost-effective resources can be used in our schools to help ensure each and every student has access to a world-class education." - Governor Schwarzenegger

Plog — World news photography, Photos Posted Feb 07, 2011 Share This Gallery inShare850 Up and down Detroit’s streets, buildings stand abandoned and in ruin. French photographers Yves Marchand and Romain Meffre set out to document the decline of an American city. Their book “The Ruins of Detroit“, a document of decaying buildings frozen in time, was published in December 2010.

The Bacteriophages 2/e Publisher page | Google page | Amazon page | Color figures "This authoritative, timely, and comprehensively referenced compendium on the bacteriophages explores current views of how viruses infect bacteria. In combination with classical phage molecular genetics, new structural, genomic, and single-molecule technologies have rendered an explosion in our knowledge of phages. Bacteriophages, the most abundant and genetically diverse type of organism in the biosphere, were discovered at the beginning of the 20th century and enjoyed decades of used as anti-bacterial agents before being eclipsed by the antibiotic era. Since 1988, phages have come back into the spotlight as major factors in pathogenesis, bacterial evolution, and ecology. This book reveals their compelling elegence of function and their almost inconceivable diversity.

Transcription & Translation: Transcription (Advanced) Transcription & Translation: Transcription (Advanced) Transcription is the process by which the information in DNA is copied into messenger RNA (mRNA) for protein production. Transcription begins with a bundle of factors assembling at the promoter sequence on the DNA (in red). Here, two transcription factors are already bound to the promoter. 100 Free Foreign Language Classes Online March 1st, 2010 If you have always wanted to learn a language but were too put off by the high cost associated with most classes, then take a look at all these great opportunities to learn a foreign language online, at no cost to you. With so many learning opportunities online, it is a shame not to take advantage of all that you can, so be sure to spend some time with these classes. Whether you want to learn one of the major world languages or want something a little less popular, there are sure to be lessons here to help you start to speak whatever language you are interested in learning. French If you want to learn French, no matter your experience level, then check out these free classes.

Watch Free Documentary Online Garrett is a 15-year old boy living in the Alaskan wilderness with a menagerie of orphaned animals. Growing up close with nature has given him a deep understanding of nutritional needs required by diet sensitive animals on the reserve. Unfortunately, the untimely and tragic death of his mother propelled him into a downward spiral and he risked flunking out of school.

Under the Microscope #6 In this video we see a killer T-cell of the immune system attacking a cancer cell. Under the Microscope is a collection of videos that show glimpses of the natural and man-made world in stunning close-up. They are released every Monday and Thursday for the next few weeks and you can see them here: Professor Gillian Griffiths said: “Cells of the immune system protect the body against pathogens. If cells in our bodies are infected by viruses, or become cancerous, then killer cells of the immune system identify and destroy the affected cells. Science Monday’s SpaceX Launch Cancelled; Next Opportunity is April 18 SpaceX is launching a rocket to the International Space Station this afternoon. The live webcast begins at 12:45 PST and the launch itself is scheduled for 1:58.

text editor for Esperanto language Esperantilo - text editor with particular Esperanto functions, spell and grammar checking and machine translation Project blog (in Esperanto) Thanks to every REVO-uloj for a huge work and to everyone, who publishes Esperanto sources on the Internet. I thank also everyone who sends me interesting materials and comments this work.