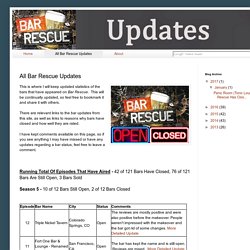 This will be continually updated, so feel free to bookmark it and share it with others. There are relevant links to the bar updates from this site, as well as links to reasons why bars have closed and how well they are rated. Kitchen Nightmares Open or Closed. Watch Kitchen Nightmares and want to see the full episode list? 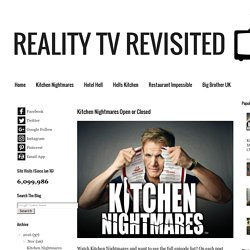 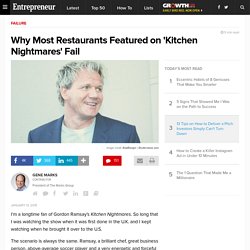 So long that I was watching the show when it was first done in the U.K. and I kept watching when he brought it over to the U.S. The scenario is always the same. Ramsay, a brilliant chef, great business person, above-average soccer player and a very energetic and forceful personality, walks into a failing restaurant whose owners invited him to turn the eatery around. He sits through a terrible meal, where he complains about the quality of the food and service to the camera. Related: Gordon Ramsay's Lessons for Motivating a Sales Team Ramsay then meets the owners and tells them how lousy their restaurant is. How does he fix them? But the restaurant probably wasn’t saved. The world is full of coaches, consultants and experts like Ramsay who try to help struggling small-business owners succeed.

Researchers Are Using Yelp to Predict When a Restaurant Will Shut Down The problem is that some people can run businesses, and some just can’t. Over 60 per cent of Gordon Ramsay's 'Kitchen Nightmares' restaurants now closed. Celebrity chef Gordon Ramsay visited 77 restaurants across seven seasons of the hit Fox reality showNearly 50 of the eateries have since shutteredSome did not even last long enough after filming to see their episodes air while still in businessOne even closed during filming for the show By Ryan Gorman Published: 21:05 GMT, 29 June 2014 | Updated: 11:43 GMT, 1 July 2014 Celebrity chef Gordon Ramsay’s ‘Kitchen Nightmares’ appears to be over, but the majority of the restaurant owners who appeared on the show are still losing a lot of sleep. 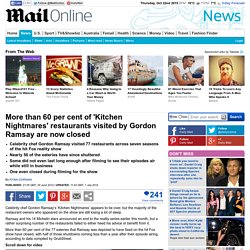 Ramsay and his 14 Michelin stars announced an end to the reality series earlier this month, but a rather surprising number of the restaurants failed to either heed his advice or benefit from it. More than 60 per cent of the 77 eateries that Ramsay was depicted to have fixed on the hit Fox show have closed, with half of those shutdowns coming less than a year after their episode airing, according to data compiled by GrubStreet. Kitchen Nightmares - Return to Amy's Baking Company (REAL EP) Kitchen Nightmares - Amy's Baking Company (Full Version) Lilo & Stitch Season 2 Episode 02 French Fry Thv Premo. MLP:FiM Episodes - Mobile. 7 WTF Anime Sex Scenes You Can't Look Away From. We should probably get this out of the way: This article about sex scenes is NSFW. 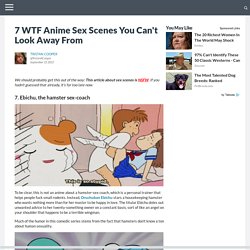 If you hadn't guessed that already, it's far too late now. 7. Ebichu, the hamster sex-coach To be clear, this is not an anime about a hamster-sex coach, which is a personal trainer that helps people fuck small rodents. Instead, Oruchuban Ebichu stars a housekeeping hamster who wants nothing more than for her master to be happy in love. Much of the humor in this comedic series stems from the fact that hamsters don't know a ton about human sexuality. Ebichu is certainly well-meaning, but her lack of expertise and fondness for yelling about blowjobs in public places makes her more of a nuisance than anything. It might sound like animal abuse, but you can't really blame the unnamed master. Unlike the extended body pillow commercials that make up the rest of this list, the sex scenes in Oruchuban Ebichu are somewhat grounded. 6. Soma is just out of middle school, but his skill is already considerable. ASK BAKKI? : Photo. 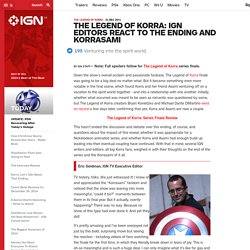 By IGN StaffNote: Full spoilers follow for The Legend of Korra series finale. Given the show's overall acclaim and passionate fanbase, The Legend of Korra finale was going to be a big deal no matter what. But it became something even more notable in the final scene, which found Korra and her friend Asami venturing off on a vacation to the spirit world together - and into a relationship with one another.

Initially, whether what occurred was meant to be seen as romantic was questioned by some, but The Legend of Korra creators Bryan Konietzko and Michael Dante DiMartino went on record a few days later, confirming that yes, Korra and Asami are now a couple. The Legend of Korra: Series Finale Review Eric Goldman, IGN TV Executive Editor TV history, folks. How adorable was this? Now was the overall approach to Korra and Asami subtle? And it’s so awesome and impactful that it’s her - the lead character, the hero.

Roth Cornet, IGN Entertainment Editor. 6 Insane (But Convincing) Fan Theories About Kids' Cartoons. For every innocent cartoon out there, there's at least one obsessive fan on the Internet who managed to crap out a semi-coherent theory finding something disturbing about it, like that Tom & Jerry was actually Nazi propaganda, or that Barney & Friends is a metaphor for the Watergate scandal. 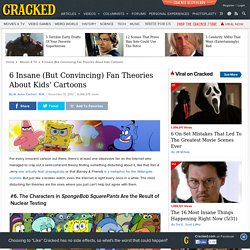 But just like a broken watch, even the Internet is right every once in a while: The most disturbing fan theories are the ones where you just can't help but agree with them. #6. The Characters in SpongeBob SquarePants Are the Result of Nuclear Testing. Childhood multi-kill. Equestrian Genetics. Revelations.