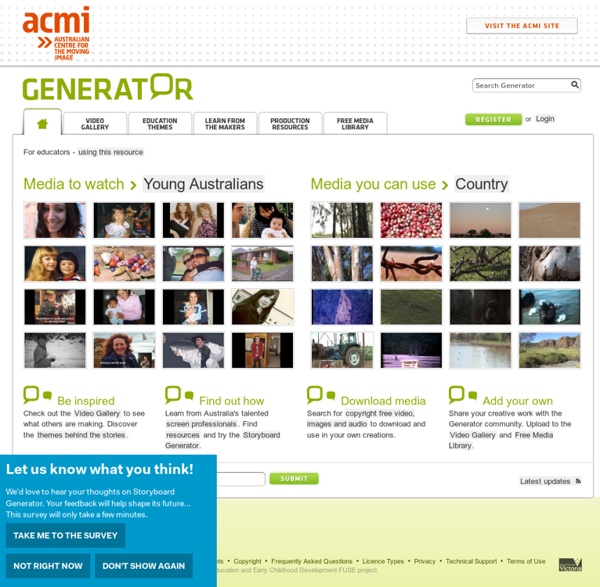 for Schools Professional artwork jumpstarts student creativity, quickly drawing them into the writing process and scaffolding their progress. Simple tools keeps them on track; social feedback keeps them going. Onboard students with or without email, issue challenges, review and share work, and build a beautiful class library. All in a private setting that collects NO data from you or your students. Storybird is free for educators. In fact, we pay you. English Syllabus Documentation Revised Syllabus Word format (83 pages, 725 KB) Acrobat PDF (83 pages, 225K) Support Documentation Stage 5 English Course Performance Descriptors (to be used for grading for the Record of School Achievement) Advice on Programming and Assessment Word format (48 pages, 1.1MB) Acrobat PDF (48 pages, 296K)

8 Steps to Great Digital Storytelling Stories bring us together, encourage us to understand and empathize, and help us to communicate. Long before paper and books were common and affordable, information passed from generation to generation through this oral tradition of storytelling. Consider Digital Storytelling as the 21st Century version of the age-old art of storytelling with a twist: digital tools now make it possible for anyone to create a story and share it with the world. 125 Great Science Videos: From Astronomy to Physics & Psychology Astronomy & Space Travel A Brief, Wondrous Tour of Earth (From Outer Space) – Video – Recorded from August to October, 2011 at the International Space Station, this HD footage offers a brilliant tour of our planet and stunning views of the aurora borealis.A Universe from Nothing – Video – In 53 minutes, theoretical physicist Lawrence Krauss answers some big enchilada questions, including how the universe came from nothing.A Year of the Moon in 2.5 Minutes – Video – The Lunar Reconnaissance Orbiter has been orbiting the moon for over a year. The footage gets compressed into 2 slick minutes.A Day on Earth (as Seen From Space) – Video – Astronaut Don Pettit trained his camera on planet Earth, took a photo once every 15 seconds, and then created a brilliant time-lapse film.Atlantis’s Final Landing at Kennedy Space Center – Video – After more than 30 years, the space shuttle era comes to a close. Video runs 30 minutes. Physics

Conversations in the cloud Ken Tothero · University of Texas at Austin VoiceThread conversations are media-centric, which keeps the discussions focused. They also provide an opportunity to reflect, resulting in higher quality input. And finally, the system just plain works. Ken Tothero from the University of Texas at Austin shares his experience using VoiceThread (3:04 Min)

Online Flashcards Mobilize your notes. Study on the bus or in line for a taco. Free mobile apps mean instant access to every note and flashcard you need. Syllabus bites: Visual literacy - Visual texts What are visual texts? Visual texts range from a photograph or illustration in a print magazine to the visual components of multimodal texts. The visual language choices and conventions in texts communicate and shape meaning in a range of contexts. In studying visual texts, students use the metalanguage of visual texts to describe, discuss and evaluate how they communicate meaning to the audience. Free Tool to Create Interactive Assignments and Track Learner Performance Knowmia has supported so many teachers flipping their classrooms, it’s especially popular in U.S. We’ve covered their free iPad App – Knowmia Teach (iTunes link), which can replace the paid App – Explain Everything. And it’s not just a video recording tool, it connects to a whole lot more support for teachers! In case you aren’t aware of their free resources for creating dynamic lessons, here they are: