Tips on Drawing Cartoon Eyes and Hands. Tips on Drawing Cartoon Animals. What Is Anime/Manga and Why Should You Create It in Vector? - Tuts+ Design & Illustration Article. Today we will be looking at exactly what makes a drawing "anime styled", the general theories behind drawing in this style, and why vector is a fantastic medium to work with when creating anime/manga styled artwork. 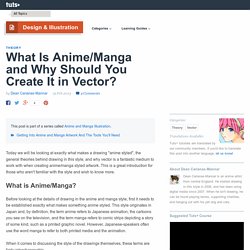 This is a great introduction for those who aren't familiar with the style and wish to know more. Before looking at the details of drawing in the anime and manga style, first it needs to be established exactly what makes something anime styled. This style originates in Japan and, by definition, the term anime refers to Japanese animation, the cartoons you see on the television, and the term manga refers to comic strips depicting a story of some kind, such as a printed graphic novel. Anime and Manga Illustration - Tuts+ Design & Illustration Tutorials. When it comes to drawing in the anime and manga style, it's fairly easy to start out in the medium you're most familiar with, but as you progress in the style, you may be interested to introduce new tools or media into your portfolio. 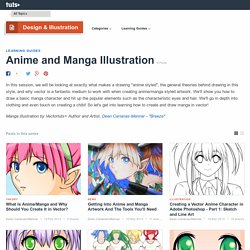 This article discusses the various media most often used by anime and manga artists today, the different brands within those media, their differences, and where you can buy them. Please note, this article does not cover every brand, nor does it cover every range within the brands mentioned, only those considered to be the most popular are found here. Cartoon Fundamentals: How to Draw a Cartoon Body. The pleasure of creating a cartoon character is immeasurable. 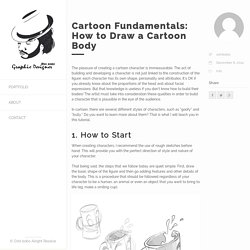 The act of building and developing a character is not just linked to the construction of the figure: each character has its own shape, personality and attributes. It’s OK if you already know about the proportions of the head and about facial expressions. But that knowledge is useless if you don’t know how to build their bodies! The artist must take into consideration these qualities in order to build a character that is plausible in the eye of the audience. In cartoon, there are several different styles of characters, such as “goofy” and “bully.” When creating characters, I recommend the use of rough sketches before hand. That being said, the steps that we follow today are quiet simple. Every drawing you will make depends on the sketch phase. Cartoon Fundamentals: How to Draw Cartoon Hands. The human hand is probably one of the hardest things to learn how to draw, since it can take many forms and, thus, express varied emotions. 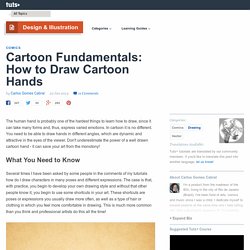 In cartoon it is no different. You need to be able to draw hands in different angles, which are dynamic and attractive in the eyes of the viewer. Don't underestimate the power of a well drawn cartoon hand - it can save your art from the monotony! Several times I have been asked by some people in the comments of my tutorials how do I draw characters in many poses and different expressions. Cartoon Fundamentals: Create Emotions From Simple Changes in the Face. There are millions of eyes, mouths, noses, ears, chins in the world, each with their own characteristics. 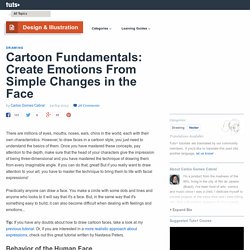 However, to draw faces in a cartoon style, you just need to understand the basics of them. Once you have mastered these concepts, pay attention to the depth, make sure that the head of your characters give the impression of being three-dimensional and you have mastered the technique of drawing them from every imaginable angle. If you can do that, great! Cartoon Fundamentals: How to Draw the Female Form.

Cartoon Fundamentals: How to Create Movement and Action. What is a cartoon without any kind of action? 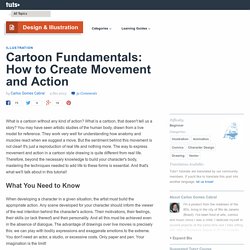 What is a cartoon, that doesn't tell us a story? You may have seen artistic studies of the human body, drawn from a live model for reference. They work very well for understanding how anatomy and muscles react when we suggest a move. But the sentiment behind this movement is not clear! It's just a reproduction of real life and nothing more. Cartoon Fundamentals: How to Draw a Cartoon Body. The pleasure of creating a cartoon character is immeasurable. 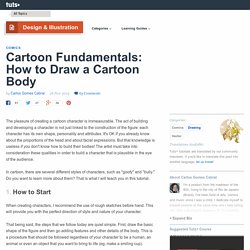 The act of building and developing a character is not just linked to the construction of the figure: each character has its own shape, personality and attributes. It's OK if you already know about the proportions of the head and about facial expressions. But that knowledge is useless if you don't know how to build their bodies! Cartoon Fundamentals: How to Draw a Cartoon Face Correctly. Cartoon Fundamentals: The Secrets in Drawing Animals. Knowing how to draw faces and facial expressions is a basic item in the toolbox of any cartoonist. 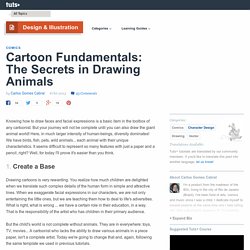 But your journey will not be complete until you can also draw the giant animal world! Here, in much larger intensity of human-beings, diversity dominates! We have birds, fish, pets, wild animals... each animal with their unique characteristics. It seems difficult to represent so many features with just a paper and a pencil, right? Well, for today I'll prove it's easier than you think. Drawing cartoons is very rewarding. But the child's world is not complete without animals. You doubt that we will draw most animals using only the circles below? If you've read my previous tutorials, there is nothing new here. Cartoon Eyes, Mix and Match to Create your own Cartoons.

Did you find a link that did not work correctly? 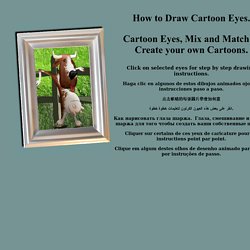