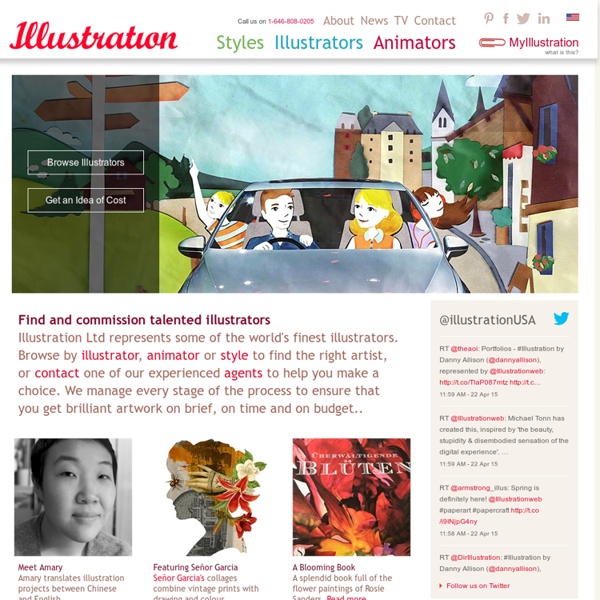 illus 6 The Surreal Paintings of Vladimir Kush posted by Damian M. under Photography on Mar 21st, 2010 with 32 Comments 21 Mar 0 Share 23 Photos Of... said Feb 4th, 2012 Love the city skylines in pics 2 and 3, amazing! Terrific Illustrative Type by Alex Beltechi Alex Beltechi is a graphic designer and illustrator from Romania. One of his stronger areas of expertise – as you can tell from the following pieces – is experimental typography. His unique blend of (usually) clean lines and grungy textures brews a pixel-perfect typographic illustration every time that are always a pleasure to look at. The 6 Creepiest Places on Earth It doesn't matter whether or not you believe in ghosts, there are some places in which none of us would want to spend a night. These places have well earned their reputations as being so creepy, tragic or mysterious (or all three) that they definitely qualify as "haunted." Places like... Aokigahara is a woodland at the base of Mount Fuji in Japan that makes The Blair Witch Project forest look like Winnie the Pooh's Hundred Acre Wood. It probably has something to do with all the dead bodies scattered around. What Niagara Falls is to weddings, Aokigahara is to suicide.

Record Sleeves of the Week Our favourite record sleeves at the moment include the limited edition box that houses Fred Deakin's triple CD, four hour mix extravaganza: The Triptych (box with bellyband shown above, contents shown below). Open the clam card box to find the three CDs, each housed in a card sleeve, and also the booklet in which Fred reveals his thoughts about every single one of the 90 tracks included in the mix. Nice. Very nice!

The memo that 'proves aliens landed at Roswell'... released online by the FBI By Daily Mail Reporter Updated: 07:37 GMT, 11 April 2011 A bizarre memo that appears to prove that aliens did land in New Mexico prior to 1950 has been published by the FBI. The bureau has made thousands of files available in a new online resource called The Vault. Among them is a memo to the director from Guy Hottel, the special agent in charge of the Washington field office in 1950.

35 Brilliant Resume Designs at DzineBlog Learn how to earn $125 or more per hour as a freelancer - Click Here Looking for hosting?. We recommend MediaTemple for web hosting. Use Code MTLOVESDESIGN for 20% off There is a part 2 to this post which is called 27 More Outstanding Resume Designs Part II. If you like what you see below check it out!

100 Illustrated Horror Film Posters: Part 1 For some, Halloween means costume parties and drunken debauchery. That’s never really been my style. Personally, I like to spend my Halloween evenings eating candy and watching scary movies. Yeah, I’m a nerd – I know. This Halloween season has had me reminiscing of the brilliant horror and sci-fi movie posters of years past.

Melissa Bedtime Stories This creative ad campaign for Melissa was inspired by fairy tales most of us heard growing up. These beautiful ads give us insight on a modern fairy tale, this is how stories like Cindirella, Snow White, Rapunzel and Little red riding hood would look like if put in present reality. When I saw these ads I thought they were advertising bedtime stories, I was very surprised to learn that this advertising campaign was in fact for a shoe brand named Melissa. How to Think of What to Draw Edit Article Edited by Dvortygirl, Laptop123, Nicole Willson, Random and 41 others Have you been inspired to draw, including getting inspiration from famous artists, or are just doing it for fun? Drawing can often be fun, but sometimes it can be hard to think of ideas for what to draw. Well, don't worry about that -- there are many, many different ideas - just read this article to find out what they are. Ad

Fake Vintage Tech Posters Advertising Agency: Moma, Sao Paulo, Brazil Creative Director: Rodolfo Sampaio Art Director: Marco Martins Copywriter: Adriano Matos Illustrator: 6B Studio Published: July 2010 Original John Berkey Sketches For Sale These are "Prelims" Sketches that John Berkey has done over the years. These were rough sketches sent out to the client to approve for angle, color, content... Some of these were selected to be used as finals for John Berkey to paint from and some were never used as finals at all. These sketches were sent to the client and were handled by many people for review, so they might have pencil marks, scratches, dents and other imperfections on them.

Portraits Of Iconic Musicians Printed on Vinyl Records I’m digging these portraits of iconic musicians made from reclaimed vinyl records. Los Angeles based artists Kaylee Carrington and Donny Phillips created these create unique and collectable works of art. You can purchase the portraits from Music Heads Etsy shop for $49.99 or £32.20. My favourite is Morrissey – The Smiths.