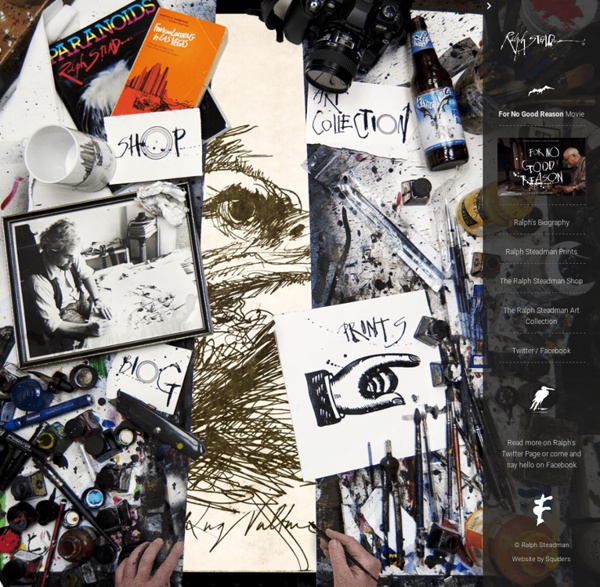 Malika Favre: The Kama Sutra from A to Z Words from Malika Favre: "I am a French illustrator based in London. My approach to illustration is about paring things down as much as possible. I try and get to the essence of my subject by using as few lines and colours as it needs to convey the core of the idea." In this series of alphabet shaped Kama Sutra poses Malika has given us exactly what we need, nothing more and nothing less. Enjoy. Scott Park Illustration twicr: These animal robots by @scottparkillustration are adorable, but they are just as likely to rise up against their human masters. Nice shout out from This Week In Creepy Robots!

Halfway down the garbage chute tanglefootcomic: This is just a shot in the dark, but I don’t suppose anybody following me has experience doing freelance character design work? Say for animated TV series, feature films or computer games? I need a bit of business advice from somebody in the know. I’ve done a little of this kind of thing in a semi-professional capacity in the past, but I’m still pretty ill-equipped to deal with the financial side of the enterprise.

Effervescent Duo Illustrations - Joshua Pekter Illustrates Colorful Graffiti Influenced Pieces Joshua Pekter is a 32-year-old graffiti writer turned illustrator who began his art career after developing an interest in abstract and figurative painting while studying abroad in Florence, Italy. One look through Joshua Pekter's portfolio makes it clear that despite his interest in figuration and abstract art, his work is still strongly influenced by his graff roots. Some highlights include an elegantly dressed woman with a paintbrush in hand creating an impressive diffusion of colors, or two (almost) identically dressed girls playing in a field of eye-catchingly bright spray paint. Joshua Pekter's artwork has been exhibited around the world, including Los Angeles, San Francisco, and the United Kingdom. The Evergreen State College (Olympia, Washington) graduate currently resides in Los Angeles.

Concept Art World Jakub Rebelka is a freelance illustrator, comics creator and concept artist working in both digital and traditional mediums. He has created illustrations for animated cutscenes for games such as The Witcher 2: Assassins of Kings and Shadow Warrior. Jakub is currently working with writer Yohan Radomski on a fantasy graphic novel titled City of Dogs. Link: shzrebelka.tumblr.com All images used with permission by the artist. © Jakub Rebelka or their respective copyright holder. Roman Muradov View high resolution This was made for Facegasm/CALA which I won’t be attending in person due to an immense fatigue that has been ruining my life & work for the last year or so, particularly recently. Probably this old thing that I’ve been neglecting for a decade.

Unbelievable Glow-in-the-Dark Paintings - Que Houxo (12 pics) These glow-in-the-dark paintings by Japanese artist Que Houxo are incredibly awesome! Bright florescent colors bounce off Houxo's murals, walls, and floors with the help of UV producing black lights. It's cool to see how the lights create such a profound effect. The Art of Heinrich Kley Heinrich Kley was born April 15, 1863, in Karlsruhe, Germany, and studied art with Ferdinand Keller at the Karlsruhe Akademy and with C. Frithjob Smith in Munich. He started out as an illustrator and a painter of murals, focussing on portraits, still lifes, animals, and landscapes. By the turn of the century Kley’s interest changed to modern industrial life, including factories, blast furnaces, ship docks, industrial buildings, and machinery. One of his best-known oil paintings from this time period is "Tiegelstahlguss bei Krupp" (Crucible steel casting with Krupp).

Dash Shaw Nice Google translation of a French review of New School: This should hit you at the opening of New School, the last BD Dash Shaw and published by Editions That There is of course the graphics. Detonates New School and impresses primarily through the shots and markers impressive colors of the author. It even feels physically, so the smell of the book (full of ink) is particularly strong. And it is a fact, the strength of this comic is mostly found in its inventiveness and rich graphics. However, the scenario is not so helpless.