23 maps and charts on language 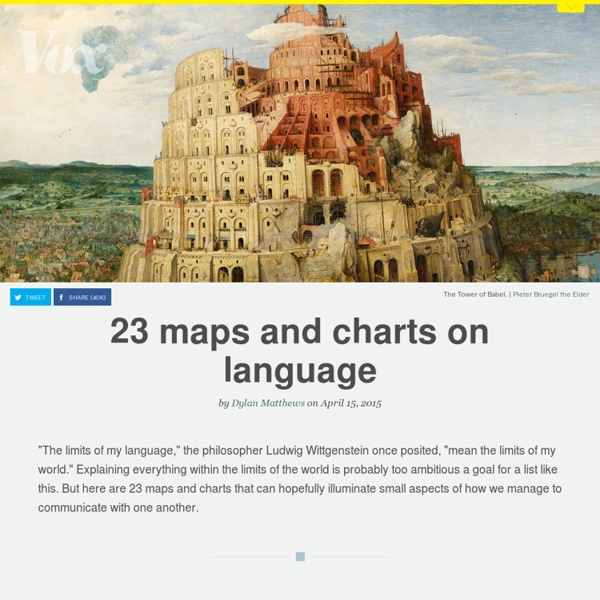 by Dylan Matthews on April 15, 2015 "The limits of my language," the philosopher Ludwig Wittgenstein once posited, "mean the limits of my world." Explaining everything within the limits of the world is probably too ambitious a goal for a list like this. But here are 23 maps and charts that can hopefully illuminate small aspects of how we manage to communicate with one another. The basics Indo-European language rootsMinna Sundberg, a Finnish-Swedish comic artist, created this beautiful tree to illustrate both the relationships between European and central Asian languages generally, as well as a smaller but still striking point: Finnish has less in common with, say, Swedish than Persian or Hindi do. Language divides Bilingualism Who in Europe speaks EnglishMany countries have more than one commonly used language, with many residents learning two or more. English American English

Better Identification of Viking Corpses Reveals: Half of the Warriors Were Female Shield maidens are not a myth! A recent archaeological discovery has shattered the stereotype of exclusively male Viking warriors sailing out to war while their long-suffering wives wait at home with baby Vikings. (We knew it! We always knew it.) Plus, some other findings are challenging that whole “rape and pillage” thing, too. The Geography of Empathy and Apathy Compassion is tricky. Solidarity is a minefield. Did you add the French tricolour to your Facebook profile picture? If not, are you a heartless bastard, or worse, an apologist for the terrorists who killed over 120 innocent civilians in Paris?

Linguistic Family Tree 552K 18.4KShare337 When linguists talk about the historical relationship between languages, they use a tree metaphor. An ancient source (say, Indo-European) has various branches (e.g., Romance, Germanic), which themselves have branches (West Germanic, North Germanic), which feed into specific languages (Swedish, Danish, Norwegian). Lessons on language families are often illustrated with a simple tree diagram that has all the information but lacks imagination. There’s no reason linguistics has to be so visually uninspiring.

Divine words: what role does language learning play in religious practice? “Silence is the language of God, all else is poor translation,” Sufi mystic Rumi once said. Words are, however, a way for the worldly to connect with the divine through prayer and worship. For many, developing a greater understanding of a religion extends not only to studying the theological and philosophical points but to learning another language. We spoke to three people studying Arabic, Hebrew and classical Tibetan about the role languages play in their relationship with religion. Hebrew and Judaism

English-speaking countries: Canada - Learning English Online Geography Canada is a country occupying(to fill either time or space) most of northern North America, extending from the Atlantic Ocean in the east to the Pacific Ocean in the west and northward into the Arctic Ocean. It is the world's second largest country by total area. Canada's common border with the United States to the south and northwest is the longest in the world. Dual DNA Streams For European Inheritance This is a careful analysis of the apparent DNA distribution throughout . It is observed that two groups of peoples emerged by way of naturally expanding populations. The Southern one is presumed to originate out of the Levant to dominate the Mediterranean littoral.

How Much Land the Federal Government Owns Will Surprise You The rough beauty of the American West seems as far as you can get from the polished corridors of power in Washington DC. Until you look at the title to the land. The federal government owns large tracts of the western states: from a low of 29.9% in Montana, already more than the national average, up to a whopping 84.5% in Nevada. This map, depicting the distribution and share of federal land per state, was first published on this blog way back in 2008. Nevertheless, it keeps accumulating comments and hits at a steady pace, and is still frequently shared around. Unlike hundreds of other random maps, this one has become a perennial.

Why is English so weirdly different from other langu... English speakers know that their language is odd. So do people saddled with learning it non-natively. The oddity that we all perceive most readily is its spelling, which is indeed a nightmare. Does Your Language Shape How You Think? When these peculiarities of Guugu Yimithirr were uncovered, they inspired a large-scale research project into the language of space. And as it happens, Guugu Yimithirr is not a freak occurrence; languages that rely primarily on geographical coordinates are scattered around the world, from Polynesia to Mexico, from Namibia to Bali. For us, it might seem the height of absurdity for a dance teacher to say, “Now raise your north hand and move your south leg eastward.”

Encyclopedia: Medieval Cosmology and Worldview Medieval cosmology was centered around the concept of the Ptolemaic universe, named after Greek astronomer Ptolemy (ca. 150 CE). In this geocentric (earth-centered) model, the earth was the motionless center of the universe, with the rest of the universe revolving around it in spheres. Ptolemy's work was based on Aristotle's (384-322 BCE) idea of an ordered universe, divided into the sublunary, or earthly, region which was changeable and corruptible, and the heavenly region, which was immutable and perfect. Aristotle posited that the heavens contained 55 spheres, with the Primum Mobile, "Prime Mover" or "First Moveable", giving motion to all the spheres within it.

The Obsessively Detailed Map of American Literature's Most Epic Road Trips The above map is the result of a painstaking and admittedly quixotic effort to catalog the country as it has been described in the American road-tripping literature. It includes every place-name reference in 12 books about cross-country travel, from Mark Twain’s Roughing It (1872) to Cheryl Strayed’s Wild (2012), and maps the authors’ routes on top of one another. You can track an individual writer’s descriptions of the landscape as they traveled across it, or you can zoom in to see how different authors have written about the same place at different times. Most interestingly of all, for me at least, you can ruminate about what those differences say about American travel, American writing, American history. A word to close readers: I hand-typed most of these 1,500-plus entries and located their coordinates as best I could. Some were difficult to track down.

The Recordings: BAPLAR (Babylonian and Assyrian Poetry and Literature: An Archive of Recordings) SOAS University of London Special characters (tsade and tet) are in Steve Tinney's Ungkam font, derived from sil.org's Gentium font. To display them correctly, download the font from oracc.museum.upenn.edu/doc/user/fonts. The download is free. There are both a Mac Suitcase version and a Win/Linux OpenType version. The Old Babylonian Period (c. 1900-1500 BCE) Ammi-Ditana’s Hymn to Ishtar How the language you speak changes your view of the world This article was written by Panos Athanasopoulos from Lancaster University. It was originally published by The Conversation. Bilinguals get all the perks. Better job prospects, a cognitive boost and even protection against dementia.