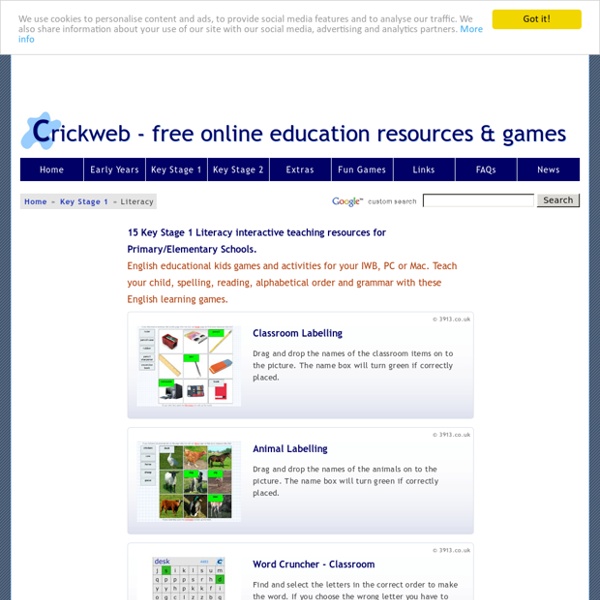 prissan - Engelska 4-6 Skip to main content Create interactive lessons using any digital content including wikis with our free sister product TES Teach. Get it on the web or iPad! The Present This ELT lesson plan is designed around a moving short film by Jacob Frey titled The Present and the theme of teenagers. Students practice adjectives related to character and teenagers, watch the start of a short films, write a narrative and discuss the film. I would ask all teachers who use Film English to consider buying my book Film in Action as the royalties which I receive from sales help to keep the website completely free. Language level: Pre-intermediate (A2) –Intermediate (B1) Learner type: All ages Fishing In The Air #1 short film & analysis - Filmnosis Coming from France, this highly creative short presents one main character, an external conflict and a focus on surprise and humor. It was produced by French artist Mickaël Dupré during his studies at Ecole Emile Cohl, and is the first one of a three-part series. The action unfolds in front of a static camera, visual rhythm is handled entirely through motion within the frame. Comedy is created through surprise, off-screen space, physical humor (the author mentions Charlie Chaplin and Buster Keaton as influences) and unexpected behavior from the main character (such as blowing a hat for recovering balance). It relies heavily on sound to transmit this to the audience, and to create a joyous ambiance, which permeates the short.

Francis short film & analysis - Filmnosis This short film is an interesting case of adaptation from the written media to the visual one. Adapted from a short story by novelist and screenwriter Dave Eggars, the idea for the film was originally conceived when radio host Ira Glass, from the radio show “This American Life”, asked a number of writers to create a short story about “Adventure”. The story premiered first on the radio and was later turned into a short film. Director Richard Hickey chose to keep the voice-over, omniscient narrator, and used visuals to potentiate the story through the expressive qualities of the main character (both facial and body language), the staging, framing (for ex. portraying the character’s helplessness through wide shots of the boat in the middle of the lake), camera moves (some fast dollies, spinning cameras, etc.), off-screen space (for the unseen character), editing rhythm and sound.