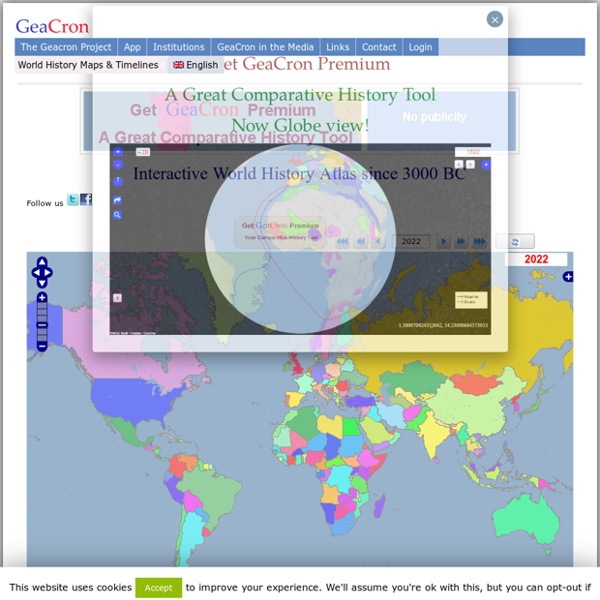 Timeline of country and capital changes This is a timeline of country and capital changes around the world. It includes dates of declarations of independence, changes in country name, changes of capital city or name, and significant changes in territory (viz. land annexation, cession or secession). 2000s 1900s 1800s 1700s 1600s 1500s 1400s 1300s 1200s 1100s 1000s 1st Millennium CE 1st Millennium BCE 2nd Millennium BCE 3rd Millennium BCE 4th Millennium BCE Global inequalities in population, wealth, and religious origin shown in six maps. This map of Canada shows the country's familiar vastness. A single line drawn across its deep south adds a surprising layer of information. The line runs well below the 49th parallel that constitutes that long straight stretch of U.S.-Canada border from Point Roberts, WA to Lake of the Woods, MN (see also #519). Split in two by the U.S. state of Maine poking north, the line traverses four eastern provinces, cutting off the southern extremities of Ontario, Québec and New Brunswick. Nova Scotia is the only province that falls mostly below the line.

The Key Role of Impurities in Ancient Damascus Steel Blades Archaeotechnology J.D. Verhoeven, A.H. Pendray, and W.E. Life After the Bombs - Map: A Reign of Bombs The Vietnam War spilled into Laos with terrible force. To break enemy supply lines and maintain control of the strategic Plain of Jars—endeavors that eventually failed—the U.S. and its allies flew hundreds of thousands of bombing sorties over Laos. Between 1964 and 1973 some two million tons of ordnance were dropped on Laos—up to 2,000 pounds for every Laotian man, woman, and child. The U.S. concentrated bombing on the highland plateau during its “secret war” against North Vietnamese and Laotian communists. North Vietnam’s supply line to South Vietnam threaded through the rugged Laotian border.

Timeline and Inventions of the 20th Century Timeline <1000 - 1300 <1400 <1500 <1600 <1700 <1800 <1900 <2000 Technology, science, and inventions have progressed at an accelerated rate during the hundred years of the 20th century, more so than any other century. We began the 20th century with the infancy of airplanes, automobiles, and radio, when those inventions dazzled us with their novelty and wonder. We end the 20th century with spaceships, computers, cell phones, and the wireless Internet all being technologies we can take for granted.

Did people in the Middle Ages take baths? - Medievalists.net It is often thought that medieval men and women did not care too much about personal hygiene or keeping clean. One nineteenth-century historian writing about daily life in the Middle Ages commented that there were no baths for a thousand years. However, a closer look shows that baths and bathing were actually quite common in the Middle Ages, but in a different way than one might expect. There are stories of how people didn’t bathe in the Middle Ages – for example, St Fintan of Clonenagh was said to take a bath only once a year, just before Easter, for twenty-four years. Meanwhile, the Anglo-Saxons believed that the Vikings were overly concerned with cleanliness since they took a bath once a week. On the other hand, we can also see many literary references and works of art depicting people taking baths, and noting that it was part of daily activity.

Atlantean Puzzle Pieces See the following Nahuatl (Aztec Words) before beginning this article: Atl = Water.Atlan = In, by, alongside, under water.Atlah= Abundant water.Ahtlantica=A big stretch of abundant water (A Nahuatl name for the Atlantic Ocean.).Atlantona = Resplendent Lady of Water (Another Nahuatl name for the Atlantic Ocean).Atlantech/Atlantesh = Place under, by, in, alongside water.Atlantes = Nahuatl name for Atlas holding up the world. Atlantean Puzzle Pieces Copyright by Ed Ziomek, Stamford, CT, and Johnny Ziomek (Los Angeles) The following are plausible explanations and theories, leading us closer to the historical truths we all seek. I suspect 1000 authors or more have found these connections before me, in the last 500 years.

Fifty psychological and psychiatric terms to avoid: a list of inaccurate, misleading, misused, ambiguous, and logically confused words and phrases “If names be not correct, language is not in accordance with the truth of things.” (Confucius, The Analects) Scientific thinking necessitates clarity, including clarity in writing (Pinker, 2014). In turn, clarity hinges on accuracy in the use of specialized terminology.

Microsoft Research: Interactive HIV/AIDS Exhibits For the past 25 years, family and friends of those who have passed away from AIDS have contributed a 6’-by-3’ panel to the AIDS Memorial Quilt. It is the largest community art project in the world. To date, more than 48,000 panels and 94,000 names make up The Quilt. Its size is now over 1.3 million square feet, making it too large to display all the panels in one place. But now the Microsoft Research project has created a fully zoomable map using Bing mapping technology that makes it possible to view the entire quilt and each of the individual blocks which are a moving memorial to those who have lost their lives to AIDS.