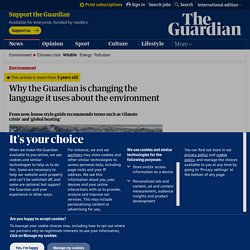 Instead of “climate change” the preferred terms are “climate emergency, crisis or breakdown” and “global heating” is favoured over “global warming”, although the original terms are not banned. “We want to ensure that we are being scientifically precise, while also communicating clearly with readers on this very important issue,” said the editor-in-chief, Katharine Viner. “The phrase ‘climate change’, for example, sounds rather passive and gentle when what scientists are talking about is a catastrophe for humanity.” “Increasingly, climate scientists and organisations from the UN to the Met Office are changing their terminology, and using stronger language to describe the situation we’re in,” she said. The United Nations secretary general, António Guterres, talked of the “climate crisis” in September, adding: “We face a direct existential threat.”

A BuzzFeed Reporter Explains His Controversial Reporting on Michael Cohen and Donald Trump. In January, BuzzFeed published perhaps the clearest accusation against President Trump in all of the reporting about the Russia investigation. 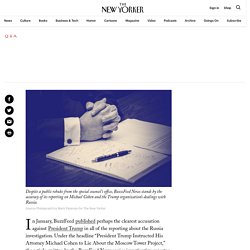 Under the headline “President Trump Instructed His Attorney Michael Cohen to Lie About the Moscow Tower Project,” the article, written by the BuzzFeed News senior investigative reporter Jason Leopold and his colleague Anthony Cormier, said that the President had personally instructed Cohen to lie to Congress about when negotiations on the project ended, and that the office of the special counsel, Robert Mueller, had learned about “Trump’s directive for Cohen to lie to Congress through interviews with multiple witnesses from the Trump Organization and internal company emails, text messages, and a cache of other documents.” The story was sourced to “two federal law enforcement officials involved in an investigation of the matter.”

However, once it was published, other federal officials spoke up. Right-wing populism and the dynamics of style: a discourse-analytic perspective on mediated political performances. The linguistics of political language can help conservatives and liberals agree on objective reality again. From donkey votes to dog whistles, our election language has a long and political history.

We now know that July 2 will be the day when our politicians, in the words of Alfred Deakin, get dragged from the tart-shop screaming. 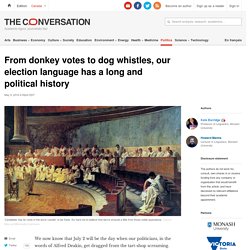 We’ll do our part to fill in the lengthy election coverage by looking at language and polly-talk. How Vocabulary Influences Emotion. Anne Curzan: What makes a word "real"? YouGov survey: British sarcasm 'lost on Americans' Rappers, sorted by the size of their vocabulary. The Largest Vocabulary In Hip Hop Rappers, ranked by the number of unique words used in their lyrics. 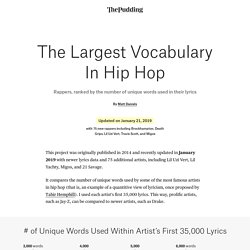 The Many Metaphors of Brexit. Brexit has inspired far more metaphors than it has solutions. 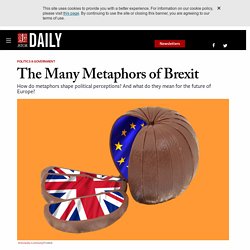 Every politician, pundit, and pub bore has come up with their own way to describe the British vote to leave the European Union. Brexit is apparently like leaving a golf club, escaping from prison, eating a chocolate orange, flying to the moon, playing football, ordering at a restaurant, taking an egg out of an omelette, or paying a bar bill. Tea analogies are particularly popular. Trump and Obama have one surprising thing in common – the words they use. Six months have passed since Donald Trump entered the Oval Office. 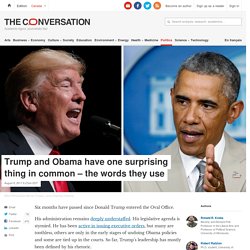 The Murky Linguistics of Consent. “Yes, no, maybe. 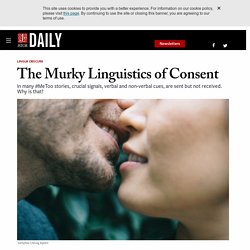 I don’t know. Can you repeat the question?” CAN LANGUAGE SHAPE REALITY? Bad language: why being bilingual makes swearing easier. My dad had a liberal philosophy of childrearing, but he would always tell us off for swearing. 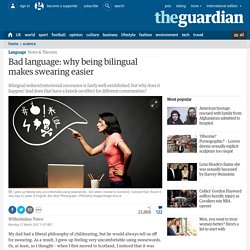 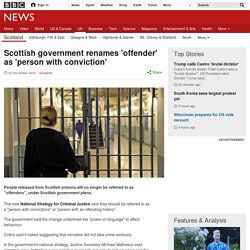 The new National Strategy for Criminal Justice said they should be referred to as a "person with convictions" or "person with an offending history". TED-Ed. New words — and what they say about us. Maybe two years ago, my sister and I came up with what we thought was a genius term for a photo that someone snapped of themselves on their cameraphone: an “extended arm shot.” 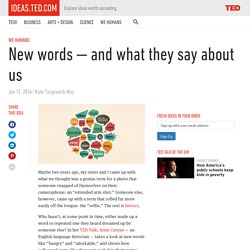 Someone else, however, came up with a term that rolled far more easily off the tongue: the “selfie.” The rest is history. Who hasn’t, at some point in time, either made up a word or repeated one they heard dreamed up by someone else? In her TED Talk, Anne Curzan — an English language historian — takes a look at new words like “hangry” and “adorkable,” and shows how colloquial terms like these get sealed in dictionaries. And while some lament these types of words as the death of a language, Curzan says they reveal that a language is living, breathing, and growing.

20 words that once meant something very different. Words change meaning over time in ways that might surprise you. We sometimes notice words changing meaning under our noses (e.g., unique coming to mean “very unusual” rather than “one of a kind”) — and it can be disconcerting. How in the world are we all going to communicate effectively if we allow words to shift in meaning like that?

The good news: History tells us that we’ll be fine. EATS, SHOOTS & LEAVES by Lynne Truss. Grandma Annii's Storytime. Explicit cookie consent. Urticator.net - Excerpts from Uncleftish Beholding. Adriano Celentano: Funny English Gibberish Song (Prisencolinensinainciusol) 7 cultural concepts we don't have in the U.S. From the end of October through the New Year and onto Valentine's Day, it's easy to forget that the holidays we celebrate are simply cultural constructs that we can choose to engage in — or not. The concepts and ideas we celebrate — like our spiritual beliefs and daily habits — are a choice, though sometimes it feels like we "have" to celebrate them, even if we don't feel like it.

Culture is ours to do with as we choose, and that means that we can add, subtract, or edit celebrations or holidays as we see fit — because you and me and everyone reading this makes up our culture, and it is defined by us, for us, after all. If you want to add a new and different perspective to your life, there are plenty of other ways to recognize joy and beauty outside American traditions. Big ideas with small language. Can scientific language be ‘translated’ into easier language? Does the rise of English mean losing knowledge? By Matt Pickles . Image copyright Thinkstock Are we "losing knowledge" because of the growing dominance of English as the language of higher education and research? Attend any international academic conference and the discussion is likely to be conducted in English. For anyone wanting to share research, English has become the medium for study, writing and teaching. What Orwell can teach us about the language of terror and war.

Words matter in ‘ISIS’ war, so use ‘Daesh’ How the language you speak changes your view of the world. This article was written by Panos Athanasopoulos from Lancaster University. Does Your Language Shape How You Think? Divine words: what role does language learning play in religious practice? Unreported World. 23 maps and charts on language. By Dylan Matthews on April 15, 2015.