Journal of Visual Culture 2014 Brideau 307 13. All Things Linguistic. What's Up With Exclamation!!! Marks!!! Between!!! Words!!!? How is language evolving on the internet? 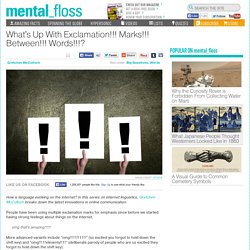 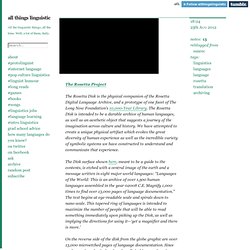 The Rosetta Disk is intended to be a durable archive of human languages, as well as an aesthetic object that suggests a journey of the imagination across culture and history. We have attempted to create a unique physical artifact which evokes the great diversity of human experience as well as the incredible variety of symbolic systems we have constructed to understand and communicate that experience.The Disk surface shown here, meant to be a guide to the contents, is etched with a central image of the earth and a message written in eight major world languages: “Languages of the World: This is an archive of over 1,500 human languages assembled in the year 02008 C.E. Magnify 1,000 times to find over 13,000 pages of language documentation.” Gender-neutral pronouns in history. Hi! 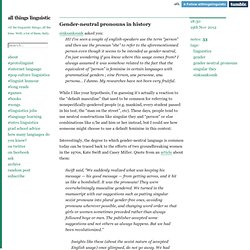 I’ve seen a couple of english-speakers use the term “person” and then use the pronoun “she” to refer to the aforementionned person even though it seems to be intended as gender neutral, I’m just wondering if you know where this usage comes from? I always assumed it was somehow related to the fact that the equivalent of “person” is feminine in certain languages with grammatical genders ; eine Person, une personne, una persona… I dunno.

My researches have not been very fruitful. While I like your hypothesis, I’m guessing it’s actually a reaction to the “default masculine” that used to be common for referring to nonspecifically-gendered people (e.g. mankind, every student passed in his test, the “man on the street”, etc). Protolinguist resources: Teaching yourself semantics. Semantics is an area of linguistics that studies how words and combinations of words come to mean things. 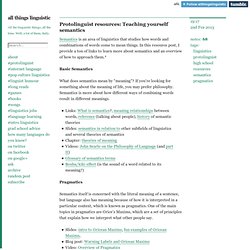 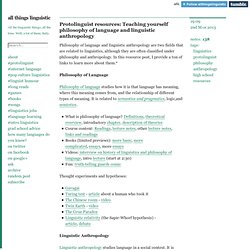 In this resource post, I provide a ton of links to learn more about them. . * Protolinguist resources: Teaching yourself descriptive grammar. What linguists mean by grammar is descriptive grammar: how words and phrases and sentences are formed in a particular language. 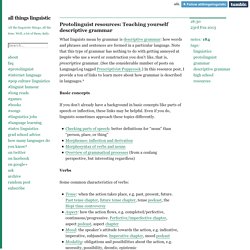 Note that this type of grammar has nothing to do with getting annoyed at people who use a word or construction you don’t like, that is, prescriptive grammar. Science-of-noise: Damn Amerindian languages, you... How syntax gets you to “think” A video by Aaron... Some Major Works in the History of Linguistics. Ling-thing: I’ve compiled a very small list of (legal) links to some of the major works in the history of linguistics. 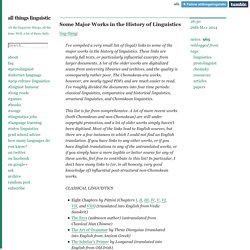 These links are mostly full texts, or particularly influential excerpts from larger documents. A lot of the older works are digitalized scans from university libraries and archives, and the quality is consequently rather poor. The Chomskean-era works, however, are neatly typed PDFs and are much easier to read. I’ve roughly divided the documents into four time periods: classical linguistics, comparative and historical linguistics, structural linguistics, and Chomskean linguistics.This list is far from comprehensive. Reblogging to add to the protolinguist tag, although in general I’d recommend that budding linguists start out with secondary sources, like textbooks, rather than primary sources.

The Science of B-B-B-Beatboxing. I wrote about a really interesting study on the linguistics of beatboxing at Lexicon Valley. 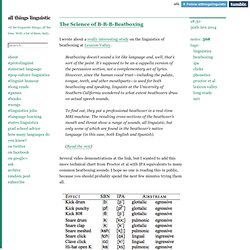 Beatboxing doesn’t sound a lot like language and, well, that’s sort of the point. It’s supposed to be an a cappella version of the percussion section, not a complementary set of lyrics. However, since the human vocal tract—including the palate, tongue, teeth, and other mouthparts—is used for both beatboxing and speaking, linguists at the University of Southern California wondered to what extent beatboxers draw on actual speech sounds.To find out, they put a professional beatboxer in a real-time MRI machine.

The resulting cross-sections of the beatboxer’s mouth and throat show a range of sounds, all linguistic, but only some of which are found in the beatboxer’s native language (in this case, both English and Spanish). (Read the rest) Several video demonstrations at the link, but I wanted to add this more technical chart from Proctor et al with IPA equivalents to many common beatboxing sounds. Neurosciencestuff: Experiencing letters as... Neurosciencestuff: Experiencing letters as colours: new insights into synaesthesiaScientists studying the bizarre phenomenon of synaesthesia – best described as a “union of the senses” whereby two or more of the five senses that are normally experienced separately are involuntarily and automatically joined together – have made a new breakthrough in their attempts to understand the condition.V.S. 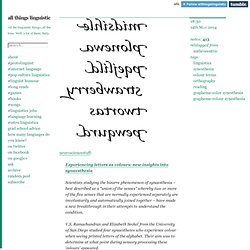 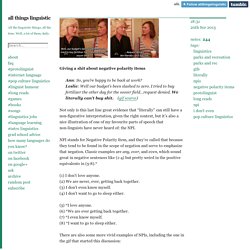 Leslie: Well our budget’s been slashed to zero. I tried to buy fertilizer the other day for the soccer field…request denied. Fun with Crash Blossoms. I wrote for Grammar Girl recently about crash blossoms: Last week, the Associated Press had a rather alarming headline. It read “Dutch military plane carrying bodies from Malaysia Airlines Flight 17 crash lands in Eindhoven.” With the amount of tension that had been in the air around the two recent Malaysia Airlines crashes, it’s no surprise that many people interpreted this headline as meaning that the Dutch plane had crash-landed (a third crash), rather than the meaning that the AP intended, that the Dutch plane carrying bodies from the crash had landed (only two crashes).

Crash blossoms are a particular type of ambiguity, generally structural but sometimes lexical, made possible by the reduced frequency of function words in headlines which makes it harder to disambiguate multiple possible interpretations. What is language? 8 myths about language and... What is language? Language is an arbitrary, conventionalized association between a symbol and a meaning: there’s no necessary connection between the meaning of a word and how it’s represented in language (spoken, signed, or written). This idea comes from Saussure. If there was a necessary connection between symbol and meaning, we would expect there to be only one possible language. Even for domains where there’s a closer link, such as onomatopoeia and the first words that a baby speaks (often mama, baba, papa, dada since these are easy to articulate), there are still differences cross-linguistically.

And for other words, such as dog, chien, perro, languages differ even more. The conventionalization criterion distinguishes language from other, non-linguistic forms of communication, such as body language and gesture. Striking gender differences in emoticon usage... What is Yoda's syntax in other languages? Writing Skills: XKCD is on point about language... Writing Skills: XKCD is on point about language again. Here’s a study from this year on kids who use abbreviations while texting, and here’s a summary of previous studies: The first study, published in 2008, showed that 11 and 12-year-olds in Britain who used more textisms — whether misspelled words (“ppl,” instead of “people”), grammatically incorrect substitutions (“2” for “to” or “too”), wrong verb forms (“he do” instead of “he does”), or missing punctuation — compared to properly written words tended to have slightly better scores on standardized grammar and writing tests and had better spelling, after controlling for test scores in other subjects and other factors.

A 2009 study, conducted by some of the same researchers on 88 kids between 10 and 12 years old, found similar associations between high textism use and slightly better reading ability. Robin Williams and Koko the Gorilla were... What is LaTeX and why do linguists love it? All Things Linguistic. Protolinguist resources: Teaching yourself... Learning Less Popular and Minority Languages When Resources Are Hard To Find. 12 Ways to stop freezing up when you try to speak a second language. Making the shift from language classroom to real-life conversation can be hard, and it’s easy to panic/freeze up when you’re on the spot and you don’t know how to respond, or how to get people to stop switching to English with you.

I got thinking recently about things that I do and that I’ve seen other fluent language learners do in order to manage this difficult situation, and ended up with the following 12 tips. 1. Pre-think. What kinds of situations am I going to be in? What will people say/how will I respond? 2. 3. 4. Nextian: Whoa, whoa, whoa, AWESOME: Sound...