Omniglot - the online encyclopedia of writing systems and languages 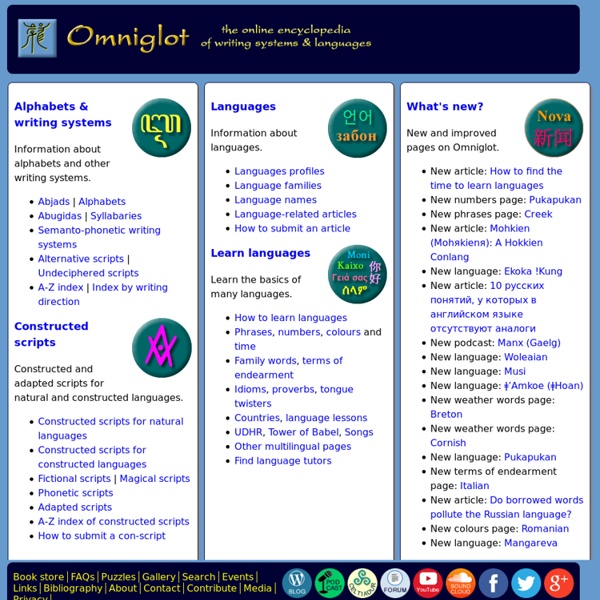 21 Digital Tools to Build Vocabulary l Dr. Kimberly's Literacy Blog If you follow this blog, you know that I believe effective vocabulary instruction is just about the most important instructional activity for teachers to get right. For lots of reasons. Vocabulary influences fluency, comprehension, and student achievement. FASTEN SEAT BELTS 2 - Travel by Continent - Europe Fasten Seat Belts, a light hearted guide to avoid misunderstandings while travelling. An innovative way to learn languages and pick up cultural tips. Travel by Continent / Europe In the Netherlands, it is the custom on someone's birthday to... Gifts, Miscellaneous, Do's & Don'ts, Netherlands Grec AP

Arabic language learning links (روابط) Here are some links to websites with free information on Arabic, and also media sources with free content that can help you practice Arabic. Please feel free to email me with other useful links (as long as they are free and contain a decent amount of content, not just one page with a few words/phrases): General Egyptian Arabic

Arabic Online - Free Comprehensive Resource of Arabic Grammar • Welcome! • Viewing Arabic Texts • Introduction • Alphabet Teaching Adverbial and Adjective Clauses When teaching adverbial and adjective clauses to students, it is important to demonstrate how these types of clauses differ. While they are both dependent clauses that cannot stand on their own and thus require another independent clause to create a grammatical sentence, adverbial clauses and adjective clauses perform two distinct functions in sentences. Adverbial Clauses Adverbial clauses are dependent clauses that modify verbs and verb phrases.

Future - The secret “anti-languages” you’re not supposed to know Could you erectify a luxurimole flackoblots? Have you hidden your chocolate cake from Penelope? Or maybe you’re just going to vada the bona omi? If you understand any of these sentences, you speak an English “anti-language”. Since at least Tudor times, secret argots have been used in the underworld of prisoners, escaped slaves and criminal gangs as a way of confusing and befuddling the authorities. Thieves’ Cant, Polari, and Gobbledygook (yes, it’s a real form of slang) are just a few of the examples from the past – but anti-languages are mercurial beasts that are forever evolving into new and more vibrant forms.

Mini Printable Chinese Exercise Book The Mini Chinese Exercise Book is a great tool for people who are serious about learning Chinese. It’s based on the excellent PocketMod that helped me organise my studies during university but it’s specifically tailored for learning Chinese. What is it? 8 Ancient Writing Systems That Haven't Been Deciphered Yet The Indus Valley civilization was one of the most advanced in the world for more than 500 years, with more than a thousand settlements sprawling across 250,000 square miles of what is now Pakistan and northwest India from 2600 BCE to 1900 BCE. It had several large, well-planned cities like Mohenjo-daro, common iconography—and a script no one has been able to understand. Over at Nature, Andrew Robinson looks at the reasons why the Indus Valley script has been so difficult to crack, and details some recent attempts to decipher it. Since we don't know anything about the underlying language and there's no multilingual Rosetta stone, scholars have analyzed its structure for clues and compared it to other scripts. Most Indologists think it's "logo-syllabic" script like Sumerian cuneiform or Mayan glyphs.

What Languages Are the Hardest to Learn? 1036 26ShareNew There's a reason why most American students start with French or Spanish as a second language. These romance languages are somewhat similar to English and require (relatively) less time to learn than most. Using information from the Foreign Service Institute, this infographic from Voxy categorizes 23 languages by the level of difficulty. Clavis Sinica: Chinese Vocabulary Extractor Tool This Clavis Sinica applet automatically creates a vocabulary list or vocabulary review sheet from any digitized Chinese text. You can specify the type of vocabulary to be included (character, compounds, or both) and your skill level (beginner, intermediate, or advanced). The higher your skill level, the fewer high-frequency words will be included on your list. With the Vocabulary Review Sheet option, you can print out a list of vocabulary words including character, pinyin, and English definitions for study and review.

A guide to writing, translating (tools).... by topoletta Jun 15