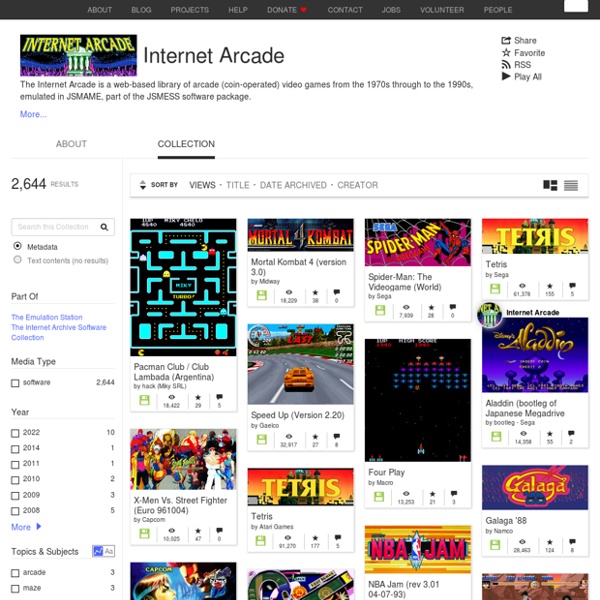 Pixar Renderman RenderMan 20 Now Available! Highlights of version 20 include a game-changing noise reduction technology that accelerate render times from 2x to 10x. RenderMan 20 also expands the creative choices available to artists and studios through numerous advances in usability including a physical camera, a Visualizer for navigating and inspecting large scenes interactively, expanded shader libraries and presets, and new volume rendering features. Read all about RenderMan 20 ▶ Arcade MAME Unit Part1 Now here is the list of things you will need for this. Hardware: · Computer( any pc will work, but the small it is, the better. Ask Chris Special Edition: The Best Of 'Ask Chris' This week marks the 200th installment of ComicsAlliance’s weekly Ask Chris column, in which senior writer Chris Sims tackles reader questions that send him delving into comics history, the metaphors at the heart of his favorite characters that have developed over decades and, every now and then, straight up fan-fiction. To mark the occasion, we’ve gone back through the archives (and taken a quick poll of readers) to sort out the absolute best of the past 200 columns, covering topics like the secular humanism at the heart of Scooby-Doo, the complicated chronology of Super Mario Bros., the 75-year competition between Marvel and DC, and more. And Batman.

Coder Corner » Archivio Blog » PEEL - public release 1.0 PEEL - public release 1.0 I am very happy to announce the first public release of PEEL - the Physics Engine Evaluation Lab. I briefly mentioned it on this blog already, here. Source code is included for the main program and most of the PINT plugins. That way you can create your own test scenes and check that everything is done correctly, and benchmarks are not biased. Pre-compiled binaries for most of the plugins are provided, for convenience. Joystick Controller - Panel Layout Having a well-organized layout for your buttons and joystick will make your performance better. The panel needs to be intuitive, accessible, and comfortable. The devices need to be placed where simple thought can associate them.

Machete Order For Star Wars Brace your­selves, what follows is an amaz­ingly long blog post about the best order in which to watch Star Wars. First, let me say this: for people that couldn't care less about the prequel trilogy, I suggest Harmy's De­spe­cial­ized Edi­tions. They are 720p videos that are the result of "Harmy" from The Orig­i­nal Trilogy forums painstak­ingly re­con­struct­ing the the­atri­cal re­leases of all three films uti­liz­ing a wide variety of video sources as well as custom mattes. Free resources for creating 2D games (2nd part) - WiMi5 Given how successful our first post on how to get free graphic and sound resources for developing a 2D game was, we’ve decided to write a second part. It looks like there’s a lot of interest from video game creators in finding sources for quality illustrations, designs, and sounds that they can use in their games.In this new article, we list some resources in the categories we had in the first article (such as Sprites). But we also add new categories, mainly tools to use in the game development, such as map editors, graphic editors, and sound editors.Graphic:Shapes4FREEShapes4FREE provides personalized shapes for Photoshop as well as other types of vector shape resources, such as icons or fonts, which you can use in your projects. They also have tutorials on how to use shapes in a project.

Wither Mario Factory? The Role of Tools in Constructing (Co)Creative Possibilities on Video Game Consoles – Casey O'Donnell Games and Culture Cover Abstract: This article examines the role that game development tools have in the design and creation of video games. It does so through the lens of a series of patents by Nintendo that outlined the technological foundations for a truly (co)creative production platform for games. Game development tools shape and are shaped by the kinds of games they are used to produce as well as the underlying technologies of game consoles.