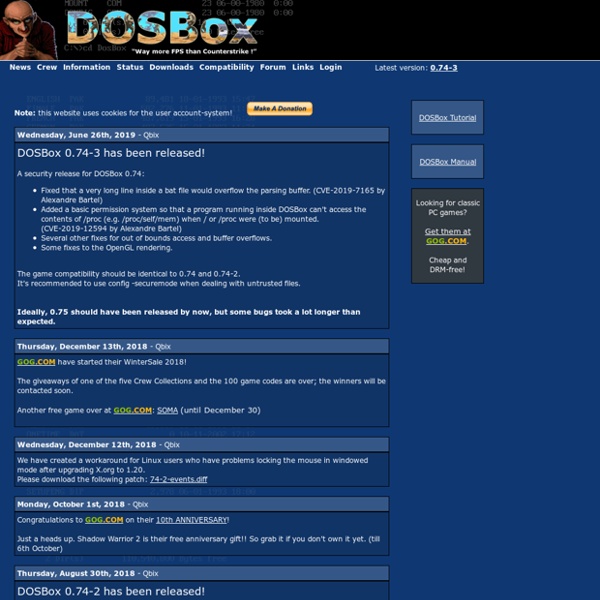 SuperCharger Script Improves Your Android Phone's Performance Android comes in a thousand different forms and flavors. This is great for those who like choice and variety when selecting a handset. However, it also means that some phones will inevitably perform worse than others. Anyone who’s used a Samsung Galaxy S II and moved to a low-end phone with an old version of Gingerbread can certainly tell the difference. The devices with less built-in power tend to struggle more and perform inadequately when compared to their processor-heavy cousins.

SteamOS We've been hard at work to deliver on our promise of a new kind of living room entertainment environment - one that is accessible, powerful and open. In making SteamOS available to you, we're excited to take the next major step towards that goal. But before you dive in, please take a few minutes to understand what SteamOS is and what it is not. SteamOS is a public release of our Linux-based operating system. The base system draws from Debian 8, code named Debian Jessie. How to Use Wine on Linux: 14 Steps Edit Article Edited by MA, Flickety, Puddy, Darrelljon and 6 others Wine is a open-source software application that allows Linux users to run Windows programs. This can be helpful for programmers who have to test the compatibility of programs and scripts with Windows. Wine also includes a software library (Winelib) to allow developers to compile applications for Windows on Unix-like servers.[1] Ad

Win 7 and XP (64 bit) civ 2 MGE and TOT issues (Fix inside!!) Hi guys Just to let you know that version 1.2 of the patcher is now available. I have received notification from Phil Gomm (Thanks for the notification BTW) that the patcher wasn't working with the version distributed by Direct2Drive. Tasker for Android Why isn't Tasker detecting when my Location Context changes ? Your radius is probably too small. As an example, if you are not using GPS the accuracy of your fixes is probably around += 2km, so your radius should be also minimally 2km. If you *are* using GPS, the accuracy may still be only +-400m in built-up areas.

Cube World I'm Wollay, the creator of Cube World. I started this game in June 2011. My inspirations were Minecraft, Zelda, Secret of Mana, Monster Hunter, Diablo, World of Warcraft and many more. My aim was to create an infinite, colorful, procedurally generated world, full of adventures, monsters, and mysteries. The result is Cube World, a voxel-based role-playing game. My wife joined development in 2012, and we have released the alpha version for Windows PC in July 2013.

GoogleSketchup Sketchup is a freely downloadable 3D modeling application first introduced for MS Windows in 2000. As of Wine-1.0, Sketchup 6 and 7 both run on Wine, at least with Nvidia graphics cards, although you may have to jump through some hoops to get it working. If you've been waiting to run Sketchup in Linux, wait no more! Please test it against wine-1.1.11 or later, and file bugs at bugs.winehq.org for any new problems you find. Tips: bug 14045; fixed as of wine-1.3.18: If you get the error "SketchUp was unable to initialize OpenGL!] 8 Things You Can Do In Android’s Developer Options The Developer Options menu in Android is a hidden menu with a variety of advanced options. These options are intended for developers, but many of them will be interesting to geeks. You’ll have to perform a secret handshake to enable the Developer Options menu in the Settings screen, as it’s hidden from Android users by default. Follow the simple steps to quickly enable Developer Options. Enable USB Debugging “USB debugging” sounds like an option only an Android developer would need, but it’s probably the most widely used hidden option in Android.

Software Library: MS-DOS Games : Free Software : Download & Streaming PLEASE NOTE: Due to a bug in Chrome Version 51, Oregon Trail does not work in that version of Chrome. It is expected to work in Version 52. The program continues to run in Firefox, Internet Explorer, and Safari, and in Beta/Canary versions of Chrome.

Logiciel gratuit de gravure ImgBurn ImgBurn supports a wide range of image file formats - including BIN, CCD, CDI, CUE, DI, DVD, GI, IMG, ISO, MDS, NRG and PDI. It can burn Audio CD's from any file type supported via DirectShow / ACM - including AAC, APE, FLAC, M4A, MP3, MP4, MPC, OGG, PCM, WAV, WMA and WV. You can use it to build DVD Video discs (from a VIDEO_TS folder), HD DVD Video discs (from a HVDVD_TS folder) and Blu-ray Video discs (from a BDAV / BDMV folder) with ease. It supports Unicode folder/file names, so you shouldn't run in to any problems if you're using an international character set. Brasero What is Brasero? Brasero is an application to burn CD/DVD for the Gnome Desktop. It is designed to be as simple as possible and has some unique features to enable users to create their discs easily and quickly.

Install - The Freeciv Wiki - Mods, coding, art, and more Requirements Edit The requirements for Freeciv and the platforms it's been reported successfully installed on.

One of the best around. Nothing like remembering the good ol' times. by mobyduck Jun 25

A DOS emulator, it's supposed to run Win98 as well. by kaspervandenberg Mar 29