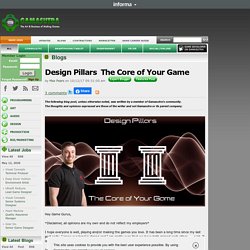 The thoughts and opinions expressed are those of the writer and not Gamasutra or its parent company. Hey Game Gurus, *Disclaimer, all opinions are my own and do not reflect my employers* I hope everyone is well, playing and/or making the games you love. It has been a long time since my last post sadly. In a previous post, I discussed how important documentation is during the development of the game’s creation. Documentation A Necessary Evil That was just us dipping our toes into the water, so let us go a little bit deeper into this pool. During the early stages of design, you will be working on creating/answering the question of “What is the game?” There are many ways to answer this but the one method I want us to focus on today in this post is the games ‘Pillars’. What makes a good RPG dungeon? - Felipe Pepe - Medium. Presskit() - spend time making games, not press. 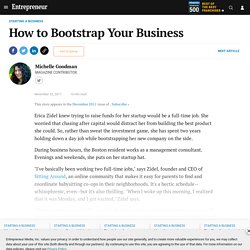 (6) Guy Kawasaki - The Art of The Start. : Robert Madsen's Blog - Starting an Indie Game Studio (Part 1) The following blog post, unless otherwise noted, was written by a member of Gamasutra’s community. 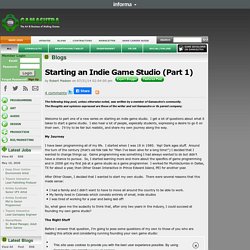 The thoughts and opinions expressed are those of the writer and not Gamasutra or its parent company. Welcome to part one of a new series on starting an indie game studio. I get a lot of questions about what it takes to start a game studio. I also hear a lot of people, espeically students, expressing a desire to go it on their own. I'll try to be fair but realistic, and share my own journey along the way. What does it really cost to open an indie studio? All your money, most of your life. It is common to hear about game companies having crushing financial woes in the games press. 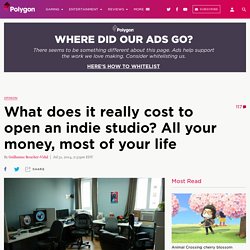 It can be observed in companies of all sizes, from THQ going under to 38 Studios defaulting on millions of debts to the recent Yogsventure project fiasco. I've seen the people behind these projects judged very harshly in comments from readers (I know, I know, I shouldn't read the comments) and usually, it seems to me that people grossly underestimate what it costs to run a game studio. Cogent Education. 6 Steps to a Successful Business Launch. June 25, 2012 10 min read This story appears in the June 2012 issue of . 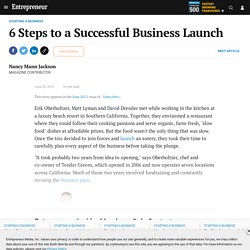 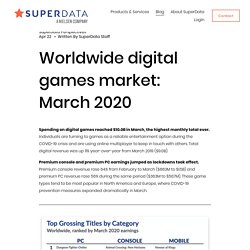 How to Make a Game Programming- GameCareerGuide.com. Whether you are a computer science graduate or a self-taught programmer, your demo portfolio is the key to getting your foot in the door of the game industry. 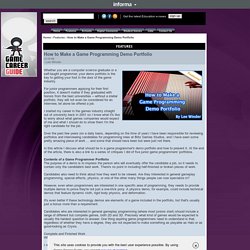 For junior programmers applying for their first position, it doesn't matter if they graduated with honors from the best universities -- without a stellar portfolio, they will not even be considered for an interview, let alone be offered a job. I started my career in the games industry straight out of university back in 2001 so I know what it's like to worry about what games companies would expect of me and what I should do to show them I'm the right candidate for the job. 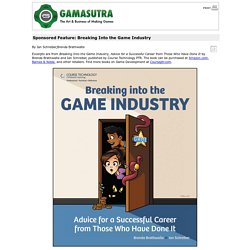 The book can be purchased at Amazon.com, Barnes & Noble, and other retailers. Find more books on Game Development at Courseptr.com. The Game Design Portfolio: Is- GameCareerGuide.com. Not long ago, I had the opportunity to talk with numerous potential game designers while I was in Charlotte, NC. 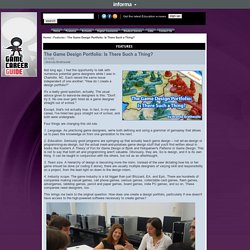 Each raised the same issue independent of one another: "How do I create a design portfolio? " It's a really good question, actually. The usual advice given to wanna-be designers is this: "Don't try it. Creating a Winning Game Industry Art Portfolio. [Art that shows direct relevance to games is so much more important than showcasing specific skills or personal preference when building a portfolio, says NinjaBee art director Brent Fox.] 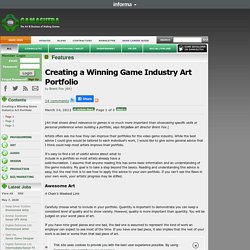 Artists often ask me how they can improve their portfolios for the video game industry. While the best advice I could give would be tailored to each individual's work, I would like to give some general advice that I think could help most artists improve their portfolio. It's easy to find a lot of useful advice about what to include in a portfolio so most artists already have a solid foundation. I assume that anyone reading this has some basic information and an understanding of the game industry. My goal is to take a step beyond the basics. Game Industry for Entry Level- GameCareerGuide.com. 10 Steps To The Perfect Web Design Portfolio. You may have a personal portfolio website for a number of reasons.

If you’re a freelancer, then you’d need one to showcase your work and allow people to contact you. If you’re a student (or unemployed), then you’d need one to show prospective employers how good you are and what you can do, so that they might hire you. If you’re part of a studio, then you might use one to blog about your design life, show people what you’re doing and build your online presence. Vlambeer. Vlambeer. The Secrets of Promotion for Indies. Erik Sebellin-Ross, an independent marketing consultant specializing in the game industry offers this practical guide to promoting your indie game. The first step to building sales for your game is generating buzz. And the first step to getting that buzz is promoting your game to journalists, bloggers, YouTube entertainers, and all other relevant influencers. Because without them writing about your game, Tweeting about your game, discussing your game on YouTube, talking about your game on their podcast, or mentioning your game in any other digital, print, or audio format, damn few people will ever hear about it.

And if they don't know about your game, they won't buy it. The secrets to scrappiness: Fighting to survive as an indie studio. Tanya X Short is director of Canadian independent studio Kitfox Games, developers of Shattered Planet and the upcoming Moon Hunters. She's a frequent blogger on Gamasutra. When we were starting Kitfox and talking to business mentors, we would often receive a lot of conflicting advice. Expert after expert would come in to our studio, look at us or our game, and tell us the exact opposite of what the previous expert said: Go big, go small, aim for quality, fail faster, target an audience, follow your heart, measure retention, think out of the box, and so on and so forth. This eventually inspired 50 Steps to Indie Success.

We survived the ordeal, and continued to ask for advice anyway, even knowing most of it would just be used to fuel confirmation bias. We were able to find our inner scrappiness because I started noticing exactly one thing most everyone said. How the World of Goo became one of the indie video game hits of 2008. The growing popularity of the indie game, World of Goo earned it the No. 1 rank on Amazon’s top ten best-selling PC games recently, albeit temporarily, among giants like World of Warcraft, Spore, Left-4-Dead, and Fallout3. This independently developed game’s success illustrate the changes that are taking place in the video game and digital content distribution landscape.

How appropriate, as we end this year and look for changes in the next. A physics-based puzzle game for all ages, World of Goo is filled with varying species of dynamic goo balls that form the building blocks of bridges, towers, and constructions, the whole point being to navigate around obstacles and reach an exit pipe. Sounds simple enough. But some levels will leave you frustrated and determined to create (or, in my case, recreate) a goo structure that might actually hold up. : Simon Carless's Blog - When Your Wishlists Don't Convert.

The following blog post, unless otherwise noted, was written by a member of Gamasutra’s community. The thoughts and opinions expressed are those of the writer and not Gamasutra or its parent company. [Hi, I’m Simon Carless, and you’re reading the Game Discoverability Now! Newsletter, a regular look at how people find - and buy - your video games. Or don’t.] Welcome to the latest Tales From Discoverabilityland (phew, that’s a long, invented word!) (24) Gaming can make a better world. (24) Gaming can make a better world. We need to talk about TED. In our culture, talking about the future is sometimes a polite way of saying things about the present that would otherwise be rude or risky. But have you ever wondered why so little of the future promised in TED talks actually happens? So much potential and enthusiasm, and so little actual change. Are the ideas wrong? Or is the idea about what ideas can do all by themselves wrong?

I write about entanglements of technology and culture, how technologies enable the making of certain worlds, and at the same time how culture structures how those technologies will evolve, this way or that. Design Is Why 2048 Sucks, and Threes Is a Masterpiece. It's hard to overstate just how good Threes really is. THREES - A tiny puzzle that grows on you. Cloned at Birth: The Story of Ridiculous Fishing. "I think 'overwhelmed' is the right word," says Rami Ismail, the business half of Dutch design duo Vlambeer. The interview is over. The story, told in pieces at least a hundred times in bars, at hamburger joints, on stages and in private circles of up-and-coming game developers, has now been told for the first time in its entirety. It is a story about the little guy getting bullied and making a stand. Recent Ruling in Triple Town/Yeti Town Game App Dispute Provides Cautionary Lessons for Both EA and Zynga.

Standing up for ourselves. Sometimes you need to stand up for yourself, or you’re just begging to be taken advantage of. We (Spry Fox) have filed a copyright infringement suit in federal court against 6Waves LOLAPPS in response to their release of Yeti Town, their blatant copy of Triple Town. Hey, That s MY Game! Intellectual Property Protection for Video Games. The Ten Most Important Video Game Patents. Wither Mario Factory? The Role of Tools in Constructing (Co)Creative Possibilities on Video Game Consoles – Casey O'Donnell. Games and Culture Cover. Beyond Management: Considering Participatory Design and Governance in Player Culture.

Characters and Worldbuilding: Analyzing the Strength of Japanese Games. - BioShock Infinite: What the critics are saying. Brainy Gamer: Narrative manifesto.