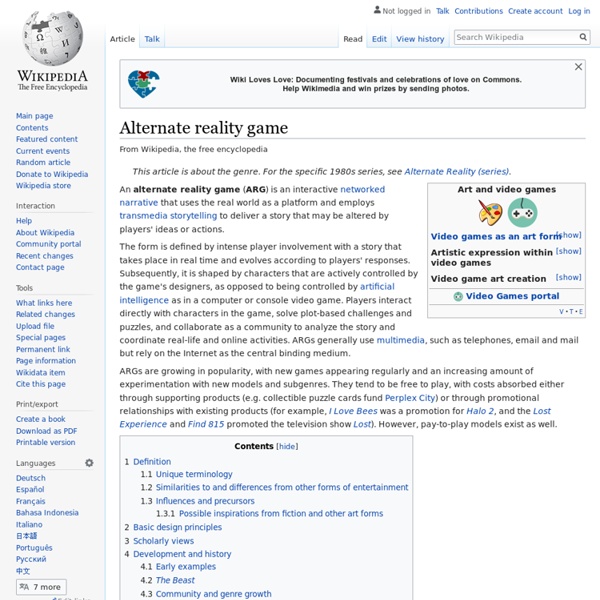 An alternate reality game (ARG) is an interactive networked narrative that uses the real world as a platform and employs transmedia storytelling to deliver a story that may be altered by players' ideas or actions. The form is defined by intense player involvement with a story that takes place in real time and evolves according to players' responses. Subsequently, it is shaped by characters that are actively controlled by the game's designers, as opposed to being controlled by artificial intelligence as in a computer or console video game. Players interact directly with characters in the game, solve plot-based challenges and puzzles, and collaborate as a community to analyze the story and coordinate real-life and online activities. ARGs generally use multimedia, such as telephones, email and mail but rely on the Internet as the central binding medium. Definition[edit] Unique terminology[edit] Among the terms essential to understand discussions about ARGs are: Computer/console/video games.

Chasing the Cicada: Exploring the Darkest Corridors of the Internet By Jed Lipinski When an unsuspecting researcher followed a mysterious command on a 4chan board, he found himself drawn into a scavenger hunt that led him down the darkest corridors of the internet and stretched across the globe. But in a place where no one shows his face and no one plays by the rules, how do you tell where the game ends and reality begins? It was 10 p.m. on a Friday night in January, and Jeff Kinkle was procrastinating. The 32-year-old cultural studies PhD was alone in his Brooklyn studio, working on a paper about institutional secrecy and the national security apparatus.

Un regard transmedia sur l’industrie de la musique Faced with the evolution of uses and new media consumption habits, the music industry has to face similar problems to those seen in the audiovisual industry: unstable audiences, growing competition and pirating. However, new economic models and multiplatform projects are emerging: Jay Z, Gorillaz or Nine Inch Nails for example, are reinforcing their relationships with their audiences through storytelling. 1New distribution models The authors of record labels are faced with one main problem these days: the decreasing sales of material media (CD, DVD), which is directly linked to the digital explosion.

Book Review: Game Urbanism The widening of the planning process is something we have only seen happening in the past 20 years. Public consultations are older, but not public participation. There was a strong practice of participation in the late eighties and early nineties, which has sort of established some public involvement, but it has also died out to a great extent again. It is however an upcoming topic again also with the availability of new tools and technologies such as digital and mobile gadgets. The tension between the 'planners' and the 'to be planned', has always posed obstacles and the understanding and the working together is complicated already because of the self image of the different parties.

Game Changer Chicago Development Blog Ashlyn Sparrow, Game Designer at Game Changer Chicago’s Design Lab, describes her time at Mozfest in London Tell us about Mozfest, the Hive Network, and how you became involved with both. The Hive Network is a locally driven network of organizations dedicated to teaching youth. There are currently Hives in Chicago, Pittsburgh, New York City and Toronto with upcoming Hives in Indonesia and San Francisco. The Mozilla Foundation runs the Hive Networks in Chicago, Pittsburgh and NYC, creating technologies that empower people to take learning into their own hands. MozFest (Mozilla Festival) is an annual conference/Maker Party that is organized by the Mozilla Foundation.

Hard Fun By Seymour Papert I have had a lot of flack from people who read this column (and other things I have written) as advocating taking the hard work and discipline out of learning. I don't blame them. I am a critic of the ways in which traditional school forces kids to learn and most attempts to introduce a more engaging, less coercive curriculum do indeed end up taking the guts out of the learning. But it is not fair to hold me guilty by association. My whole career in education has been devoted to finding kinds of work that will harness the passion of the learner to the hard work needed to master difficult material and acquire habits of self-discipline.

Cicada 3301: everything you need to know about Cicada 3301 » Simon's Personal Blog Cicada 3301 Welcome to SimonTheSorcerer’s Cicada 3301 resource page! The biggest Cicada 3301 blog online. The wikia Cicada 3301 page is not consistent and the quality of the information is not always what you expect: outdated, poorly structured and poorly presented,(and of course, a lot of trolls). I wanted to create something a bit more stable and consistent.

25 Things You Should Know About Transmedia Storytelling Let’s get this out of the way, now — this, like many/most of my other lists, could easily be called “25 Things I Think About Transmedia.” It does not attempt to purport concrete truths but rather, the things I believe about the subject at hand. I am something of an acolyte and practitioner in the transmedia cult, and sometimes give talks on the subject (as I will be doing next week in Los Angeles). So, here I am, putting my transmedia ducks in a row. Please to enjoy.

Play to win: The game-based economy Companies are realizing that "gamification" -- using the same mechanics that hook gamers -- is an effective way to generate business. Since the advent of videogames, skeptics have questioned their inherent value: why do players spend hours accruing virtual points working towards intangible rewards? Chalk it up to basic human behavior, which game makers have been trying to understand and appeal to for decades. The more effective a game resonates with users, the better its sales. The Year in ARGs - Wired Magazine This article reflects on the alternate reality games of 2010, commenting on everything from buried muppet pirate treasure to a national manhunt facilitated by Wired. Read on to learn about the revamped ending to Portal, J.J. Abrams’ attempt to replicate the buzz surrounding Cloverfield, F1 driver Lewis Hamilton’s surprising hobby, and more. By Michael Andersen, originally posted at ARGNet Image taken at San Francisco's Jejune Institute At the end of every year, I like to set aside some time to take stock of the alternate reality gaming space.

Sculpting Flow and Fiero ccasionally, at some kind of conference or expo or gathering or what-have-you, somebody asks me to take off my goofy Magic-developer-dragon hat (you should check it out sometime?it's sorta like Mickey's in Fantasia, only "edgier," in accordance with our style guide) and speak in broader strokes about game design as an intellectual discipline. Today, I want to do something similar. Often here at DailyMTG.com, we talk about the process of making Magic. But we don't really say very much about game design more broadly. In truth, though, the field of game design is exploding.

“Cicada 3301″ cryptographic puzzle game played out on 4chan & reddit: best job hire in disguise? – istartedsomething What does the Caesar Cipher, a picture of a duck, Mayan numbers, King Arthur, 2143909608, 845145127.com, GPS coordinates in Warsaw, Paris, Seattle, Seoul, Arizona, California, New Orleans, Miami, Hawaii and Sydney have in common? They’re all pieces of an online cryptographic puzzle game that began earlier this January. It all began with a seemingly generic image uploaded to the 4chan community boards with a simple message which reads Hello. We are looking for highly intelligent individuals.

Game Design Advance › Turn Me On, Dead Man: Why Urban Legends Make the Best ARGs In 1969, whispers of a strange rumor began spreading through college newspapers and radio stations across North America. Students in Iowa and Michigan had been tracking clues that pointed towards a sinister conspiracy dating back three years, that if true would suggest one of the most disturbing hoaxes ever staged. Though the mainstream media refused to take their claims seriously, they put their word out in broadcasts, reviews and books, in the hopes of spreading the news and letting everyone in the world know the terrible truth of an entire generation’s greatest heroes. Though that information is still widely written off, it is known in every corner of the earth today by three infamous words: “Paul is dead.” Was it true?

Video Games Win a Beachhead in the Classroom Gillian Laub for The New York Times Class Media Nicole Dodson, Dakota Jerome Solbakken and Nadine Clements, students at Quest to Learn, a New York City public school, play a game they designed. Doyle was, at 54, a veteran teacher and had logged 32 years in schools all over Manhattan, where he primarily taught art and computer graphics. In the school, which was called Quest to Learn, he was teaching a class, Sports for the Mind, which every student attended three times a week. It was described in a jargony flourish on the school’s Web site as “a primary space of practice attuned to new media literacies, which are multimodal and multicultural, operating as they do within specific contexts for specific purposes.”