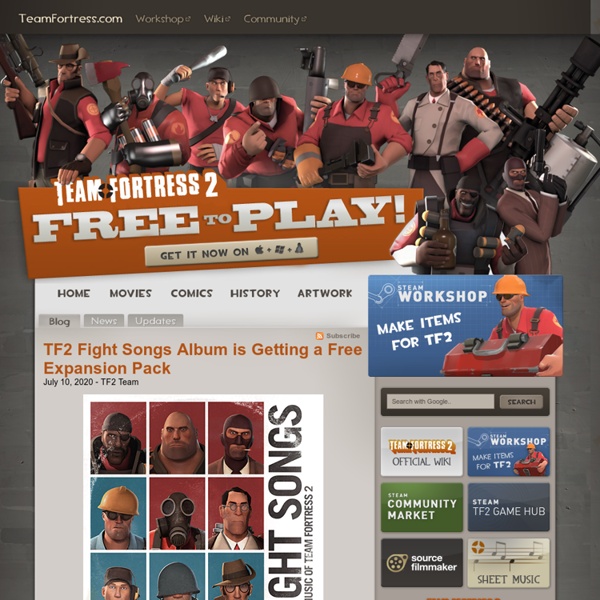 Team Fortress 2 is now Free-to-Play One of the most popular online action games of all time, Team Fortress 2 delivers constant updates—new game modes, maps, equipment and, most importantly, hats. Nine distinct classes provide a broad range of tactical abilities and personalities, and lend themselves to a variety of player skills. Meet the team > No matter what your style and experience, we've got a character for you. There are hundreds of weapons, hats and more to collect, craft, buy and trade. Team Fortress 2 Meet the Medic Dr. Frankenstein. Dr. To that we say pshht. Never toil in God's domain? Which brings us to our point. Let's Meet the Medic. Uber Update Three The Über Update, Day Three War. Hunh. But now Edwin Starr's going to have to rewrite that stupid song of his to something more accurate, because as of this moment, war is good for something. Also, if you weren't eagle-eyed enough to notice, the Scout made a surprise appearance yesterday with a class pack of his own.

Uber Update Two The Über Update, Day Two Ahhhhhh, the desert. Sandy, camel-filled seductress. What secrets does she clutch to her fig-stuffed, wind-swept bosoms? Lots. Don't believe us? It's probably clear to you by now that we've been doing quite a bit of research about the desert. Anyway, since you're probably already camped out at a bookstore waiting for our desert book to come out, why not take over one of the computers at the information kiosk and enjoy TimbukTuesday? Uber Update One The Über Update, Day One Welcome to Day One of the Über Update--the biggest, most ambitious update in the history of Team Fortress 2. We've got a lot to announce as we get closer to the update's release this Thursday, June 23rd. We've been holding one of the surprises pretty close to the vest for months now. We don't want to ruin it, but we'll give you four clues to get you guessing: 1.) Let the speculation begin! All that hanging out with mob guys must have rubbed off on us, because we've decided to celebrate the Über Update by giving you an offer you can't (or at least shouldn't) refuse--an unprecedented WEEK-LONG FREE WEEKEND of Team Fortress 2, starting right now! Last but not least, today's the day we reveal our all-new website.