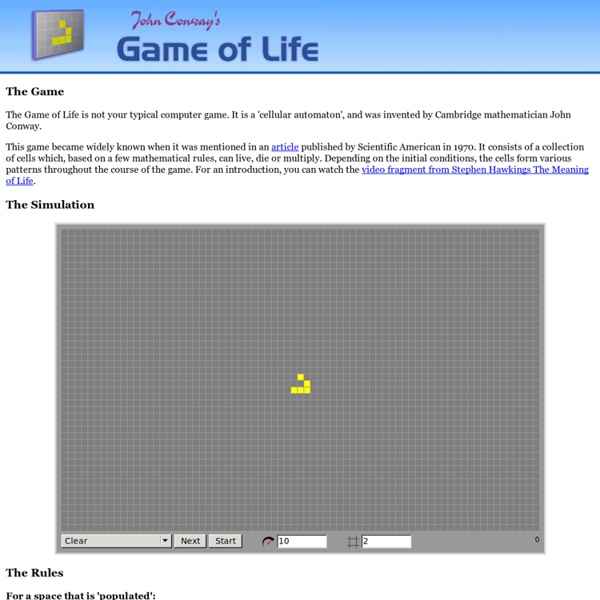 The Game The Game of Life is not your typical computer game. It is a 'cellular automaton', and was invented by Cambridge mathematician John Conway. This game became widely known when it was mentioned in an article published by Scientific American in 1970. It consists of a collection of cells which, based on a few mathematical rules, can live, die or multiply. Depending on the initial conditions, the cells form various patterns throughout the course of the game. The Rules For a space that is 'populated': Each cell with one or no neighbors dies, as if by loneliness. Each cell with four or more neighbors dies, as if by overpopulation. Each cell with two or three neighbors survives. For a space that is 'empty' or 'unpopulated' Each cell with three neighbors becomes populated. The Controls Choose a figure from the pull-down menu or make one yourself by clicking on the cells with a mouse. The Download Download the free program. Download page of the Game of Life The Source Code More information

A Visual Explanation of SQL Joins I love the concept, though, so let's see if we can make it work. Assume we have the following two tables. Table A is on the left, and Table B is on the right. We'll populate them with four records each. id name id name -- ---- -- ---- 1 Pirate 1 Rutabaga 2 Monkey 2 Pirate 3 Ninja 3 Darth Vader 4 Spaghetti 4 Ninja

Maillardet's Automaton at The Franklin Institute In November of 1928, a truck pulled up to The Franklin Institute science museum in Philadelphia and unloaded the pieces of an interesting, complex, but totally ruined brass machine. Donated by the estate of John Penn Brock, a wealthy Philadelphian, the machine was studied and the museum began to realize the treasure it had been given. This Automaton, known as the "Draughtsman-Writer" was built by Henri Maillardet, a Swiss mechanician of the 18th century who worked in London producing clocks and other mechanisms. It is believed that Maillardet built this extraordinary Automaton around 1800 and it has the largest "memory" of any such machine ever constructed—four drawings and three poems (two in French and one in English). Automata, such as Maillardet's Automaton, demonstrated mankind's efforts to imitate life by mechanical means—and are fascinating examples of the intersection of art and science. Mechanics of Memory

Neurology of Gaming, Infographic « All Kinds of Minds As with most things, “gaming” (or being engaged in video games) has both positives and negatives when it comes to developing minds. Too much gaming, and the positive effects are overshadowed by the negative. Yet, the right balance can add another avenue for pursuing educational goals and achievement. As a result, more and more programs are using gaming to reach and teach students in ways they never could before. Therapy programs, schools, and even research scientists have all benefitted from the strategic use of games to increase successes.

Mediocrity Mediocrity was invented as a game by Douglas Hofstadter and published in his book Metamagical Themas: Questing for the Essence of Mind and Pattern. In its original form, it is simply a guessing game, similar to Rock, Paper, Scissors, but a rather cerebral version. By playing with some friends, I (Greg Weidman) have assembled rules that make for a simple, hilarious card game for 3 or 4 players. Create a basic flowchart - Visio - Microsoft Office Important notice for users of Office 2003 To continue receiving security updates for Office, make sure you're running Office 2003 Service Pack 3 (SP3). The support for Office 2003 ends April 8, 2014. If you’re running Office 2003 after support ends, to receive all important security updates for Office, you need to upgrade to a later version such as Office 365 or Office 2013. For more information, see Support is ending for Office 2003.