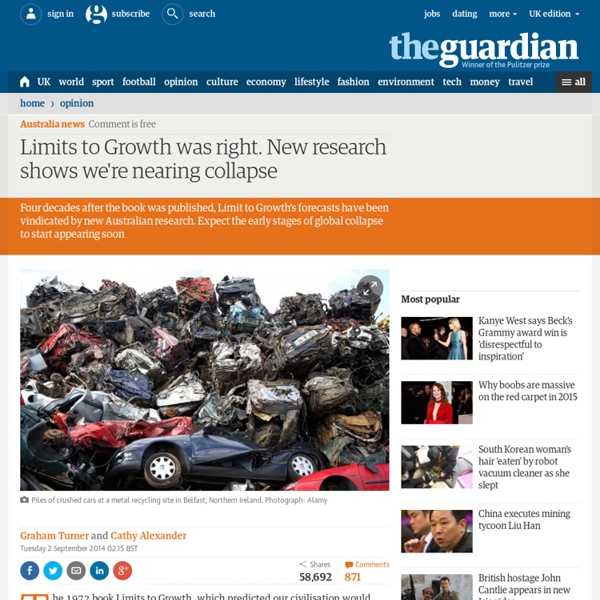 The 1972 book Limits to Growth, which predicted our civilisation would probably collapse some time this century, has been criticised as doomsday fantasy since it was published. Back in 2002, self-styled environmental expert Bjorn Lomborg consigned it to the “dustbin of history”. It doesn’t belong there. Research from the University of Melbourne has found the book’s forecasts are accurate, 40 years on. If we continue to track in line with the book’s scenario, expect the early stages of global collapse to start appearing soon. Limits to Growth was commissioned by a think tank called the Club of Rome. The task was very ambitious. The book’s central point, much criticised since, is that “the earth is finite” and the quest for unlimited growth in population, material goods etc would eventually lead to a crash. So were they right? The results show that the world is tracking pretty closely to the Limits to Growth “business-as-usual” scenario. So far, Limits to Growth checks out with reality.

Related:  Futur • Big Pictures • Our Environment and its Degradation

What Humans Are Really Doing to Our Planet, in 19 Jaw-Dropping Images Last week, Pope Francis and church officials encouraged everyone to consume less and think more about our impact on the environment. It's a timely warning because the next six months will be critical to our future. Ahead of a series of major events later this year, The Foundation for Deep Ecology and the Population Media Center released a collection that illustrates the devastating effects of out-of-control growth and waste, and it's breathtaking. The most liberal and conservative big cities in America, in one chart Even the most conservative cities in America are barely right of center, as this great chart from the Economist, based on research from Chris Tausanovitch at UCLA and Christopher Warshaw at MIT, shows: It's no surprise that most big cities are left of center, as the Pew Research Center points out. What's interesting is how liberal even the median big city is. Cincinnati, for example, hangs around the center of big cities' political spectrum, but the Economist's chart shows it's still fairly liberal. For another look at the liberal and conservative towns and cities each state, check out this map from Business Insider:

A Requiem for Florida, the Paradise That Should Never Have Been ORLANDO, Fla.—The first Americans to spend much time in South Florida were the U.S. Army men who chased the Seminole Indians around the peninsula in the 1830s. stumbleupon Climate scientists tend not to report climate results in whole temperatures. Instead, they talk about how the annual temperature departs from an average, or baseline. They call these departures "anomalies." Salvinia molesta - Wikipedia Salvinia molesta, commonly known as giant salvinia or kariba weed after it infested a large portion of the reservoir of the same name, is an aquatic fern, native to south-eastern Brazil.[1] It is a free floating plant that does not attach to the soil, but instead remains buoyant on the surface of a body of water. The fronds are 0.5–4 cm long and broad, with a bristly surface caused by the hair-like strands that join at the end to form eggbeater shapes.[2] They are used to provide a waterproof covering. These fronds are produced in pairs also with a third modified root-like frond that hangs in the water.

Shifting tides: Global economic scenarios for 2015–25 At the National People’s Congress in Beijing in March 2015, China’s Premier Li Keqiang announced a growth target of 7 percent, acknowledging that “deep-seated problems in the country’s economy are becoming more obvious.” Three months later and thousands of miles away in Washington, the World Bank lowered its growth forecasts across the board and asked the US Federal Reserve Bank to delay any contemplated rate hikes. The World Bank’s chief economist said that it had “just switched on the seat belt sign. We are advising nations, especially emerging economies, to fasten their seat belts.” So it’s going to be a bumpy ride?

The Marsh at the End of the World – Guernica Photograph: Elizabeth Rush. A gnarled old pine marks the entrance to the Sprague River Marsh. It is high summer, a short season of riotous green in Maine. But the tree hasn’t taken any cues from the tilting of the planet, the long hours of sunlight, or the sudden warm spike. Mother tongues - www.lucasinfografia.com Mother tongues INFOGRAPHIC. There are at least 7,102 known languages alive in the world today.