Everything is a Remix Part 2 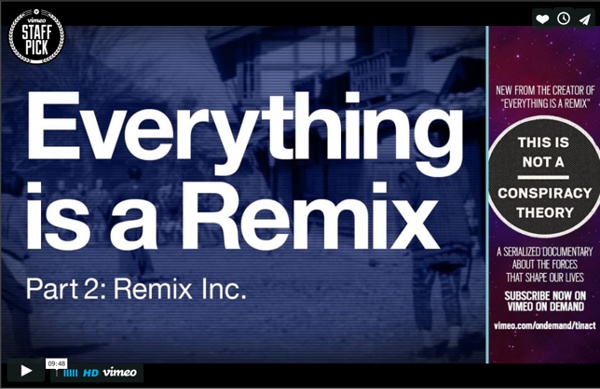 The Illusion of Choice It seems like in today’s world there are fewer and fewer people making choices for the greater good. What I mean to say is that everything in our world seems to be able to be consolidated. The media of course is no exception to this trend with only 6 major companies dictating about 90% of the media we have access to. In less than 30 years the number of companies providing us with our media has dropped from 50 to just 6. The six companies consisting of GE, New-corp, Disney, Viacom, Time Warner, and CBS. Foster Gamble « Thrive Debunked By SlayerX3 One of the central passages of Thrive is a section often referred to as “Follow the Money,” which Thrive fans treat as some sort of slogan. This section contains Foster Gamble and others’ views on fractional reserve banking, the Federal Reserve, the economic crisis, and conspiracy theories related to these. This article debunks those ideas. Fraction Reserve Banking Disclaimer:

Remix Culture I have not posted on Remix Theory for some time. The reason being that I have been editing along with fellow editors xtine Burrough and Owen Gallagher an upcoming volume on Remix Studies. It has been a lot of intensive work, needless to say but well worthwhile as we believe the remix community will value the many contributions that comprise the volume.

Michelle Jenneke 'Creeper' Is Everyone On The Internet Right Now While the innocence of 19-year-old Australian hurdler Michelle Jenneke's warm-up routine is debatable, there's no two ways about the slow-motion re-cut of it that went viral last week. Yes, her milkshake brought all the boys to the Web. And now that collective leer has its own avatar: the Creeper. Digitom Productions posted a spoof in which a lad (that's Canadian for "bro," right?) gawks and gesticulates while Jenneke gyrates on the starting block. Broadcast Yourself. Please note: This material is provided for informational purposes only. It is not, nor is it intended to be, legal advice, or a substitute for legal advice. The rights to any screen shots or footage of third party content on our site are not ours to grant.

21 Emotions For Which There Are No English Words [Infographic] Few of us use all--or even most--of the 3,000 English-language words available to us for describing our emotions, but even if we did, most of us would still experience feelings for which there are, apparently, no words. In some cases, though, words do exist to describe those nameless emotions--they're just not English words. Which is a shame, because--as today's infographic by design student Pei-Ying Lin demonstrates, they often define a feeling entirely familiar to us. Lin solicited the list of "unspeakable" words from colleagues at London's Royal College of Art, and found that their definitions in English usually came down to something like, "it is a kind of (emotion A), close to (emotion B), and somehow between (emotion C) and (emotion D)." A couple of other good ones that didn't make this map [via So Bad So Good]: Litost (Czech): a state of torment created by the sudden sight of one's own misery

Manufacturing Consent: Noam Chomsky and the Media Manufacturing Consent: Noam Chomsky and the Media (1992) is a documentary film that explores the political life and ideas of Noam Chomsky, a linguist, intellectual, and political activist. Created by two Canadian filmmakers, Mark Achbar and Peter Wintonick, it expands on the ideas of Chomsky's earlier book, Manufacturing Consent: The Political Economy of the Mass Media, which he co-wrote with Edward S. Herman. The film presents and illustrates Chomsky's and Herman's thesis that corporate media, as profit-driven institutions, tend to serve and further the agendas of the interests of dominant, elite groups in the society. A centerpiece of the film is a long examination of the history of The New York Times' coverage of the Indonesian occupation of East Timor, which Chomsky says exemplifies the media's unwillingness to criticize an ally of the elite. Companion book[edit]

Remix culture Read-Only Culture vs. Read/Write Culture[edit] The Read Only culture (RO) is the culture we consume more or less passively.