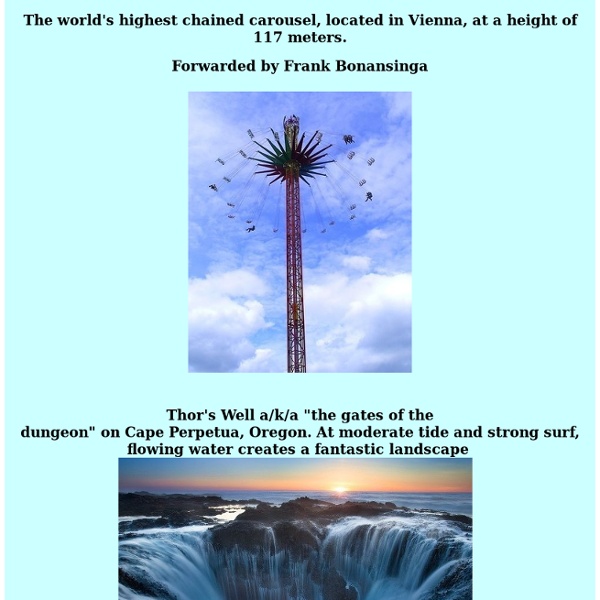 The world's highest chained carousel, located in Vienna, at a height of 117 meters. Forwarded by Frank Bonansinga Thor's Well a/k/a "the gates of the dungeon" on Cape Perpetua, Oregon. At moderate tide and strong surf, flowing water creates a fantastic landscape Emerald Lake in the crater of an extinct volcano. Tongariro National Park - New Zealand Restaurant on a cliff on the east coast of Zanzibar. Office of Selgas Cano in Madrid Desert with Phacelia (Scorpion Weed). Balloons in Cappadocia. Dubai. And this is the view down These trees grow in the forest near Gryfino, Poland. The border between Belgium and the Netherlands in a cafe Twice a year in the Gulf of Mexico rays migrate. In the resort town of Skagen you can watch an amazing natural phenomenon. In the Chinese province of Shandong is a bridge across the Gulf of Jiaozhou. Day and night. An unusual tunnel in California's Sequoia National Park This statue, created by Bruno Catalano, is located in France Family photo Autumn camouflage Home Related:  madmaz • pictures

50 Strange Buildings of the World This is the original list of 50 strange buildings which has been and is being copied (stolen) by many bloggers. If you wish to post it on your blog or website, feel free to use up to 20 buildings from this list and give a proper link to our website ( as the source article. Ok, now enjoy this weird, odd, bizarre and incredible looking arcitechture! After reading it, don’t forget to check Part II and Part III. 1. Construction of the building started in in January 2003 and in December 2003 it was finished. Image via: brocha 2. The Hundertwasser house “Waldspirale” (”Forest Spiral”) was built in Darmstadt between 1998 and 2000. The structure with 105 apartments wraps around a landscaped courtyard with a running stream. Image via: Kikos Dad 3. Image via: manuelfloresv 4. Image via: Mélisande* 5. The Longaberger Basket Company building in Newark, Ohio might just be a strangest office building in the world. Image via: addicted Eyes 6. Image via: jonathan_moreau 7.

A Father Who Creatively Captures His Kids (20 photos) If there was a prize that could be given out to the most creative father, I'd hope that it was awarded to Jason Lee. A wedding photographer by day, he's used to capturing some of the most important moments in a couple's lives. As a longtime fan of Jason's photos on Flickr however, I think the real magic happens when he turns the camera onto his daughters. Sure, his children are adorably cute in their own right, but that's not what makes his photos so interesting. It's when he puts his own spin on their everyday moments that we not only get to experience our own childhood again, we're able to see a father's pride shine through. I was able to get in touch with Jason to ask him a few questions. Q: How did you get into photography? Q: How do you come up with such creative photos of your daughters? Q: How has being on Flickr helped you with your business? Q: Any inspirational stories you'd like to share? Q: Do you have any advice for aspiring photographers? Q: Any quotes you live by?

Long Exposure Firework Photographs by David Johnson Incredible Long Exposure Firework Photographs by photographer David Johnson in International Fireworks Show in Ottawa… David Johnson Incroyable série de photographies longue exposition du feux d’artifice par le photographe David Johnson au International Fireworks Show à Ottawa … Photography Tutorial: A Quick Guide to Understanding Your DSLR Camera Hi guys! With Labor Day weekend coming up, I know a lot of us are going to be out there taking pictures! :) Since we have a long weekend to practice, I wanted to share with you this basic intro to SLR photography. Left: Canon T2i. To start, let’s put your camera in Aperture Priority mode or Shutter Priority mode. 1. Let’s talk a little bit about Aperture. Photos taken with a low aperture let in more light, allowing you to take pictures in situations where there is not much light (like indoors and at night). A low aperture will also give you a shallow depth of field. Canon 50mm f/1.8 f/1.8 1/200 sec ISO 800 In the photo above, the aperture was set to 1.8, a low aperture. Canon 24-70mm f/2.8 f/16 1/60 sec ISO 100 In this picture, the aperture was set to 16, a high aperture, allowing everything to be in focus. Note: Depending on what lens you have, you may not be able to set your aperture much lower than 3.5. Now you try! Set your aperture. Left: Canon XSi. 2. 3. 4. 5. You’re almost there!