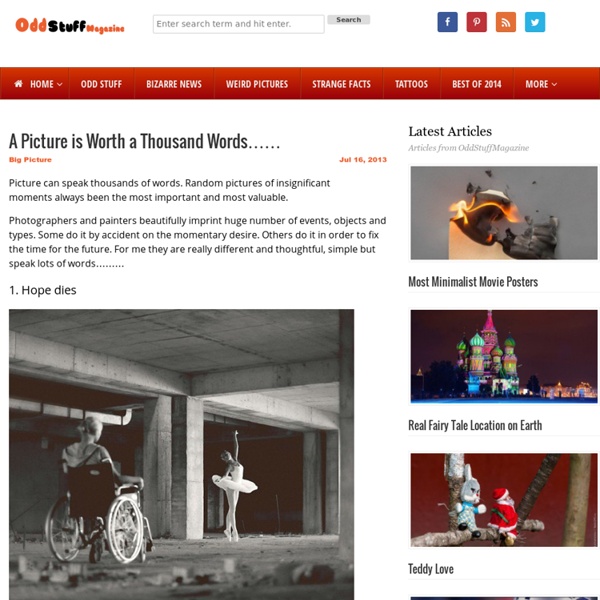 Most popular photography on StumbleUpon! 2011 is over, In this article, I am showcasing the most beautiful photographs that were stumbled on StumbleUpon. Let us take a look at this truly jaw-dropping collection and enjoy! Source: StumbleUpon At the right moment - part 5 (16 pictures) Cool and funny photos taken at the right moment from the right angle. Previous part: At the right moment – Part 4 Via: [Perfectly Timed Photos] and [Fishki.net] 99 Excellent Examples of Forced Perspective Photography Forced perspective is a technique that employs optical illusion to make an object appear farther away, closer, larger or smaller than it actually is. It is used primarily in photography, filmmaking and architecture. It manipulates human visual perception through the use of scaled objects and the correlation between them and the vantage point of the spectator or camera.

Fred O'Bryant's Quote Collection - Volume 5 There are 500 quotes in this volume. To find a quote by a specific author, or that includes a particular word or phrase, use your browser's FIND function to search for the quote you want. Every effort has been made to attribute the source of each quotation properly. Anyone finding an error or who knows the source for any quotation marked "Unknown" or "Anonymous" please contact Fred O'Bryant . A lawful kiss is never worth as much as a stolen one. — Guy de Maupassant (1850-1893) Nobody works harder than a curious kid. — David "Doc" Searls (1947- )

The most beautiful suicide On May 1, 1947, Evelyn McHale leapt to her death from the observation deck of the Empire State Building. Photographer Robert Wiles took a photo of McHale a few minutes after her death. The photo ran a couple of weeks later in Life magazine accompanied by the following caption: 50 Images from National Geographic`s 2010 Photo Contest Writen by Bogdan / Comments Off on 50 Images from National Geographic`s 2010 Photo Contest This is one of the most anticipated annual photo contests. The deadline for the submissions is on November 30th so if you have an interesting photo, submit it. Below you can see 50 images collected from different categories. Funny Underwater Dogs Great collection by Seth Casteel Award-winning photographer Seth Casteel has been featured on GOOD MORNING AMERICA, EXTRA, CNN WORLD REPORT, THE TODAY SHOW, JEOPARDY! and in TIME Magazine. As one of the most published pet photographers in the world, his work can be seen in hundreds of magazines, calendars, posters, books and TV shows.

National Geographic Photo Contest 2011 National Geographic is currently holding its annual photo contest, with the deadline for submissions coming up on November 30. For the past nine weeks, the society has been gathering and presenting galleries of submissions, encouraging readers to vote for them as well. National Geographic was kind enough to let me choose among its entries from 2011 for display here on In Focus. 20 minutes of advice on how to live from Neil Gaiman In some circles, Neil Gaiman has attained near rockstar status. Twenty years ago Gaiman was making the celebrated graphic novel , and was dabbling in longer-form writing. He went on to write amazing books like American Gods, Coraline, and Neverwhere.

Gakuranman - illuminating Japan - StumbleUpon The ruins and haikyo aficionado in me couldn’t resist making a post about Tokyo Genso‘s fabulous art depicting post-apocalyptic Japan. The illustrations have a breathtaking otherworldly quality that perfectly capture the sort of scenes I regularly come across while exploring ruins, albeit of course, on a much grander and majestic scale. Some of the scenes really aren’t stretching the truth that much either. Head into the backstreets of Japan and you’ll quickly find dilapidated old buildings and creeping plants reclaiming man-made structures for mother nature.

Moment Speaks For itself (23 Pics) by aminassareh Apr 6