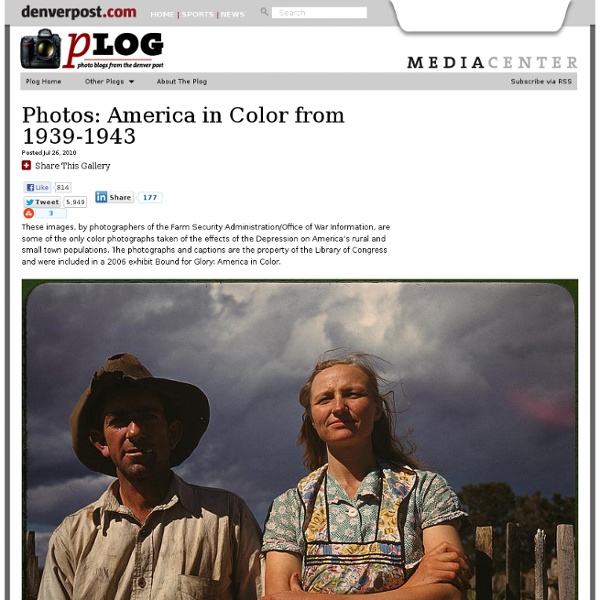 Posted Jul 26, 2010 Share This Gallery inShare324 These images, by photographers of the Farm Security Administration/Office of War Information, are some of the only color photographs taken of the effects of the Depression on America’s rural and small town populations. The photographs and captions are the property of the Library of Congress and were included in a 2006 exhibit Bound for Glory: America in Color. Faro and Doris Caudill, homesteaders. Pie Town, New Mexico, October 1940. Connecticut town on the sea. Farm auction. Children gathering potatoes on a large farm. Trucks outside of a starch factory. Headlines posted in street-corner window of newspaper office (Brockton Enterprise). Children in the tenement district. Going to town on Saturday afternoon. Chopping cotton on rented land near White Plains. Barker at the grounds at the state fair. Backstage at the "girlie" show at the state fair. At the Vermont state fair. Couples at square dance. Orchestra at square dance. House.

backyard « Harlem Studio Fellowship – NYC NOt here Works by: Ruben Aubrecht, Maria Anwander, Alessandro Imbriaco, Veronica Raimo. Curated by Raffaele Bedarida Download Floor Plan: not here floor plan Intricately Patterned Animal Illustrations It would be hard to tell from these strikingly detailed animals but artist Iain Macarthur got his start drawing cartoon characters. Now he carries his sketchbook on the bus, to the cafe and everywhere else as he includes more realism and in this case pattern in his illustrations. See more of his animals (and even some cartoons) at iainmacarthur.carbonmade.com. See Also INCREDIBLE 3D ILLUSTRATIONS JUMP OUT OF THE SKETCHBOOK Via: hypemuch.com Known in some circles as the most amazing man in the universe, he once saved an entire family of muskrats from a sinking, fire engulfed steamboat while recovering from two broken arms relating to a botched no-chute wingsuit landing in North Korea.

30 Best Earth Pictures of the Week – April 24th to May 01th 1. The Blue Dragon by Steve Richards 2. Shore in Seychelles Early 1900s in Colour - All around the world All around the world - Franny Wentzel - Thursday, May 6th, 2010 : goo [previous] :: [next] In the early part of the 20th century French-Jewish capitalist Albert Kahn set about to collect a photographic record of the world, the images were held in an 'Archive of the Planet'. Before the 1929 stock market crash he was able to amass a collection of 180,000 metres of b/w film and more than 72,000 autochrome plates, the first industrial process for true colour photography www.albert-kahn.fr/english/ Funny Dogs and Cats Pictures << Cute Puppies and Cute Kittens | Funny Animal Pictures >> Cute and Funny Dogs and Cats Pics More Funny Dog and Cat Pictures: Playing Cat covering dog’s eyes with paws Guess Who?

Visa pour l'Image Perpignan 2011 News Who is doing what and where? Who is in town and what's on show? 20 Amazing Artist-Inspired Tattoos [Editor's note: While your Flavorwire editors take a much-needed holiday break, we're revisiting some of our most popular features of the year. This post was originally published February 16, 2011.] If we’re being honest, most of us will never own a work of art by a famous artist. And while back in college, it might have been okay to pay homage to one of the greats with a poster print from the museum, these days when it comes to the artwork that hangs on our walls, we tend to opt for original pieces by emerging (read: more affordable) talents. A few enterprising souls have found a way to sidestep the issue completely by displaying famous works of art directly on their bodies.

25 Most Beautiful Animals Photography on StumbleUpon I think the most beautiful pictures are those made in nature. Nothing compares with the expression of a tiger, the majestic flight of an eagle or the strength of a white bear. Below you can see 25 the most beautiful animal photographs that will capture your attention, and were stumbled on StumbleUpon. Cretive Design Art Photos and Artworks The archives of the Institute Bishopsgate contain photos of old London, to make society photographing relics of the old London.Photos so qualitatively, that the windows of some houses you can see chunks of sliced bread or read the writing on the playbills store Sv.Makklsfilda in 1883. In these photographs are almost no people, and if they occasionally can be seen, they seem almost ghost

50 Most Beautiful Colleges When choosing a college, many students overlook one of the most important factors: quality of life. At The Best Colleges one of our goals is to emphasize to students the importance of the context and learning environment in which they choose to get educated. In polling that we’ve conducted of recent college graduates, there is one thing in particular that stands out as playing a vital role in how a student perceives her last four years of education. The campus setting. And beautiful college campuses rule the day.