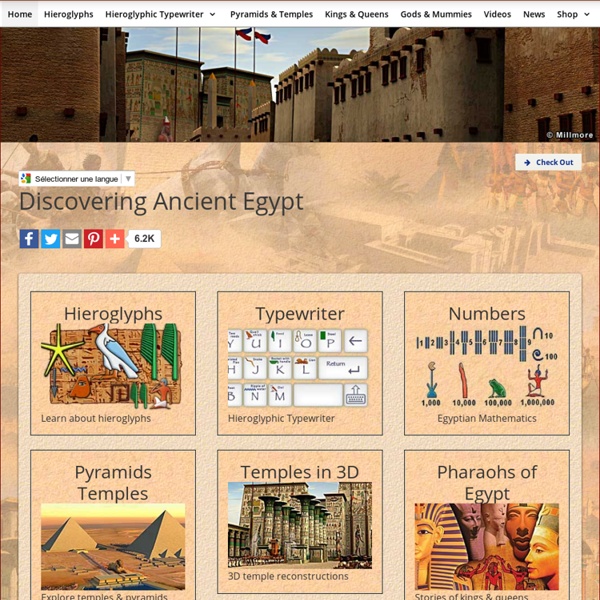 Carnegie Museum of Natural History: Life in Ancient Egypt Life in Ancient Egypt Welcome to Life in Ancient Egypt, a companion online exhibition to Walton Hall of Ancient Egypt at Carnegie Museum of Natural History. Carnegie Museum of Natural History has acquired Egyptian artifacts since its founding and now holds about twenty-five-hundred ancient Egyptian artifacts. The most significant of these objects, over six hundred of them, are displayed in Walton Hall of Ancient Egypt. Egyptian mummies 'virtually unwrapped' for first time in thousands of years Posted Twenty-first century technology is being used to tell the stories of six ancient Egyptians, mummified as long as 3,000 years ago. A temple singer, a priest and a two-year-old child are some of the mummies brought from the British Museum for a world premiere exhibition at Sydney's Powerhouse Museum. CT scans and 3D printing has allowed experts to reveal the faces of the ancient people, and even recreate objects buried with them. British Museum exhibition curator Daniel Antione said today's technology means they can now safely and respectfully expose the mysteries embalmed centuries ago. "We're really lucky that my predecessors at the British Museum decided not to unwrap any of the mummies," Mr Antoine said.

s Tomb at neferchichi.com Here are some links that bring you to web pages with Egypt-themed lesson plans and activities. Links that go outside this site will open into a new window. Here are some activity ideas to try out in the classroom... Make Simulated Papyrus Papyrus scrolls were made by taking slices of the inner part of the papyrus stem and arranging them in perpendicular layers. The layers were then covered with linen and flattened by a stone to get the juices to leak out. Ancient Egypt - Ancient History Under Ahmose I, the first king of the 18th dynasty, Egypt was once again reunited. During the 18th dynasty, Egypt restored its control over Nubia and began military campaigns in Palestine, clashing with other powers in the area such as the Mitannians and the Hittites. The country went on to establish the world’s first great empire, stretching from Nubia to the Euphrates River in Asia.

Explore Ancient Egypt Explore Ancient Egypt With 360-degree and other imagery, walk around the Sphinx, enter the Great Pyramid, visit tombs and temples, and more. Want to walk around the Sphinx? Clamber inside the Great Pyramid of Giza and seek out the pharaoh's burial chamber? Visit the magnificent tombs and temples of ancient Thebes? In this multi-layered, highly visual interactive, view 360° panoramas, "walkaround" photos, and other breathtaking imagery shot throughout the Giza Plateau and ancient Thebes (modern-day Luxor), often with special permission. Mummies and papyrus among treasures found in Egypt's newest ancient Greco-Roman tomb Posted Egypt has unearthed an ancient burial site containing at least 17 mummies, most fully intact, in the latest in a string of discoveries that the country's Antiquities Minister described as a helping hand for its struggling tourism sector. Key points: At least 17 mostly-intact mummies discovered in the tomb south of CairoBelieved to date from Greco-Roman period, after 332 BCOne of a number of ancient discoveries in Egypt this year The funerary site, uncovered eight metres below ground in Minya, a province about 250 kilometres south of Cairo, contained limestone and clay sarcophagi, animal coffins, and papyrus inscribed with Demotic script. The burial chamber was first detected last year by a team of Cairo University students using radar.

Egyptian tomb adventure Please note that unfortunately there is an error in this game. The part of the game that looks at canopic jars incorrectly states that in an Egyptian burial the jar in the form of the human-headed god Imsety contains the lungs and the jar in the form of the baboon-headed god Hapy contains the liver. However, Imsety should contain the liver and Hapy the lungs.

Who were the ancient Egyptians? Mummy DNA reveals surprising clues - Science News - ABC News Mummies from ancient Egypt have revealed another secret — some of them share very little of the sub-Saharan African ancestry that dominates the genetic heritage of modern Egyptians. Egypt key points Key points Genetic analysis done on 93 mummies that lived in an important centre in ancient EgyptAncient genome from this area contains no sub-Saharan DNA that dominates the genetic profile of modern EgyptiansIt more closely resembles the genetic heritage of modern people from the Near East and Levant The discovery, published today in Nature Communications, suggests the African heritage evident in modern Egyptian populations may have been the result of the slave trade down the Nile in the past 1,500 years. Researchers used modern genetic analysis techniques to study the genomes of 93 mummies that lived between 1300 BC — the late New Kingdom Period — and around 30 BC during the time of the Romans.

Explore Ancient Egypt Explore Ancient Egypt with our Interactive Map © 2012 This website is produced by the Student Recruitment, Admissions and International Development Division at The University of Manchester New clues illuminate mysteries of ancient Egyptian portraits WASHINGTON — Scientists are getting a clearer picture of how ancient Egyptians painted lifelike portraits that were buried with mummies of the depicted individuals. These paintings sharply departed from Egyptians’ previous, simpler artworks and were among the first examples of modern Western portraits, archaeologist and materials scientist Marc Walton reported February 14 at the annual meeting of the American Association for the Advancement of Science. The “mummy portraits” date to more than 2,000 years ago, when the Roman Empire controlled Egypt. Three such portraits of Roman-era Egyptians, found more than a century ago at site called Tebtunis, were created by the same artist, said Walton, of Northwestern University in Evanston, Ill. Identities of the boy and two men in the portraits are unknown. Many pigments in the portraits probably came from Greece, Walton said.

Egypt announces discovery of 3,500yo tomb belonging to royal goldsmith Updated Egypt has announced the discovery in the southern city of Luxor of a pharaonic tomb belonging to a royal goldsmith who lived more than 3,500 years ago during the reign of the 18th dynasty. The tomb is located on the west bank of the river Nile in a cemetery where noblemen and top government officials were buried. Antiquities Minister Khaled el-Anany said the tomb was not in good condition, but it contained a statue of the goldsmith, named Amunhat, and his wife as well as a funerary mask, mummies and jewellery. He said a shaft in the tomb contained mummies belonging to ancient Egyptian people who lived during the 21st and 22nd dynasties. "The work did not finish yet and we're continuing and working to find more objects and more tombs."

5-14 - Illustrations and photos - Ancient Egyptians These illustrations are free for any kind of educational use - whether you are a teacher creating topic worksheets or looking for ideas to spark creative writing, or a pupil who needs illustrations for a presentation or website. Easy to download When you see an illustration you like, click on the thumbnail to see a larger version. Then - to download the full-sized version - on a PC right-click on the image and select 'Save Picture As', or on a Mac hold down Ctrl, click on the image and select 'Download Image to Disk'. Egyptian Mummies The methods of embalming, or treating the dead body, that the ancient Egyptians used is called mummification. Using special processes, the Egyptians removed all moisture from the body, leaving only a dried form that would not easily decay. It was important in their religion to preserve the dead body in as life-like a manner as possible. So successful were they that today we can view the mummified body of an Egyptian and have a good idea of what he or she looked like in life, 3000 years ago. Mummification was practiced throughout most of early Egyptian history. The earliest mummies from prehistoric times probably were accidental.