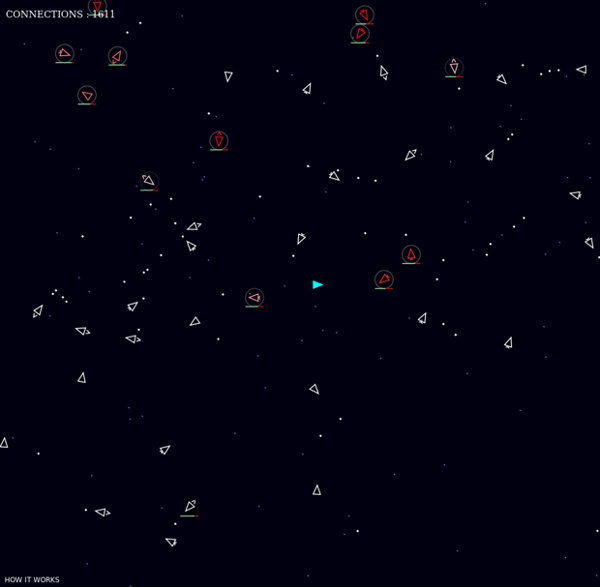 John Conway's Game of Life The Game The Game of Life is not your typical computer game. It is a 'cellular automaton', and was invented by Cambridge mathematician John Conway. This game became widely known when it was mentioned in an article published by Scientific American in 1970. The Simulation The Rules For a space that is 'populated': Each cell with one or no neighbors dies, as if by solitude. Each cell with four or more neighbors dies, as if by overpopulation. Each cell with two or three neighbors survives. For a space that is 'empty' or 'unpopulated' Each cell with three neighbors becomes populated. The Controls Choose a figure from the pull-down menu or make one yourself by clicking on the cells with a mouse. Java version This page initially contained a Java applet and a Java application you can download. Game of Life Java applet Life is a bit - Edwin Martin <edwin@bitstorm.org>

s Lair: The Vault Who doesn't remember Ocarina of Time? It brought Legend of Zelda to the N64 and is considered by many to be one of the best games in the history of time. Graphics: 10At the time Ocarina had the most beautiful graphics around, and the look given to the cast of characters has inspired every Legend of Zelda game since. Sound: 10From the fields of Hyrule to the Temple of Time to the many other environments of the Legend of Zelda world, the environment music makes you feel the difference in every area you visit, and the music you play on the Ocarina is instantly recognizable to almost any gamer. Gameplay: 10Never has a game done so well with such a simple formula: Put players in a dungeon, make them search for a key to the boss room and for a weapon to kill the boss, and then repeat. Overall: 10With the perfect blend of plot, gameplay and replayability, this game stands strong even after years of industry progression.

MyLifeIsAverage - Life is pretty normal today Multiple Choice Zombie Apocalypse Survival Game | Choice of Zombies You really aren't awake yet. You never are until at least your second cup of coffee, and this is only your first. You're having a hard time getting your eyes to focus. But it certainly looks like there's a man in your front yard, crouched down on all fours, gnawing at a leg. A human leg. Definitely. The man gnawing on the human leg suddenly stops chewing, as though some sound disturbs him. You've heard about the outbreak in Millbury, of course. But it seems the newscasters were at least a little right, because there's a zombie chowing down on a human leg in your front yard. Shit. 100,000 Stars Happy Wheels Hello pals. I'd like to continue hosting the flash version of Happy Wheels as long as possible. With the loss of certain ad networks, I'm going to try out a few different ad formats on this site as I continue to attempt to regain some of the revenue that went missing. I'll be making a few minor changes here and there to see whatever works best. The discord server, which is now official at has been very helpful to me and the game. Though I would prefer to be silent, I feel obligated to say that I am still working full time on the sequel, and it's still reeeeeaally time consuming.