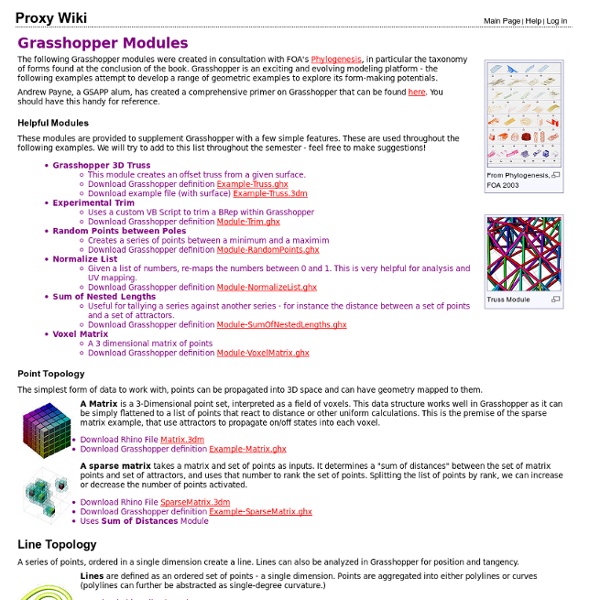 From Phylogenesis, FOA 2003 The following Grasshopper modules were created in consultation with FOA's Phylogenesis, in particular the taxonomy of forms found at the conclusion of the book. Grasshopper is an exciting and evolving modeling platform - the following examples attempt to develop a range of geometric examples to explore its form-making potentials. Andrew Payne, a GSAPP alum, has created a comprehensive primer on Grasshopper that can be found here. You should have this handy for reference. Helpful Modules These modules are provided to supplement Grasshopper with a few simple features. Truss Module Grasshopper 3D Truss This module creates an offset truss from a given surface. Point Topology The simplest form of data to work with, points can be propagated into 3D space and can have geometry mapped to them. A Matrix is a 3-Dimensional point set, interpreted as a field of voxels. Download Rhino File Matrix.3dmDownload Grasshopper definition Example-Matrix.ghx Line Topology

RHINO: GRASSHOPPER DEFINITIONS - RHINO / GH This definition was developed for my final thesis project to generate a louver system based on functional requirements within the building. The performance was then tested in Ecotect. A large part of my thesis design involved invertible arena seating with many moving parts. This definition looks at taking any curved surface, and generating weaving geometry across it. The parametric skyscraper uses Grasshopper to generate the entire structure. My favorite definition to date, this definition generates box designs based on real boxes I crafted in the wood shop while in Grad school This definition extrudes geometry based on their proximity to a polyline attractor. Using a definition created by paramod, I wanted to see if I could edit the definition so that different panels could be combined to create a seamless surface This definition takes a cylinder and transforms it based on the location of objects moving around it. Louvers orient themselves towards multiple objects based on proximity.

Tutorials Introduction to Grasshopper Videos by David Rutten. Wondering how to get started with Grasshopper? Look no further. Spend an some time with the creator of Grasshopper, David Rutten, to learn the fundamental of Grasshopper. No experience necessary. Dario Donato director di SpatialConnection(s), incubatore di ricerca per una creatività matematica, ha il piacere di annunciare il libro: Contaminazioni creative digitali – Trascrizioni di una complessità algoritmica attraverso Rhino.Grasshopper Transcripts of a complexity algorithmic through Rhino and Grasshopper. If you’re looking for a nice collection of Grasshopper tutorials then jump over to Designalyze Here are a series of beginner and advanced tutorials from our friends at Studio Mode... This tutorial series was developed for the Design Studio AIR at the University of Melbourne, Faculty of Architecture, Building and Planning. Versione italiana del tutorial Essential Mathematics, tradotta da Nando Varriale The Grasshopper Primer第二版中文教程下載

Animate Sketching of a Parametric Truss Previous studies on the timer component were based on understanding it’s use. This time, I tried to implement it in a geometric design task. Moreover, manipulating timer component to change the regular animation of parameters. Time does not have to be equally divided sequences. Rather, new possibilities may be emerged with different time flows. A simple triangulation system is developed with a potential manipulation, based on a timer. Here is the Grasshopper definition if you want to play with it. The overall look of the geometry is based on an idea by Nilüfer Kozikoğlu.