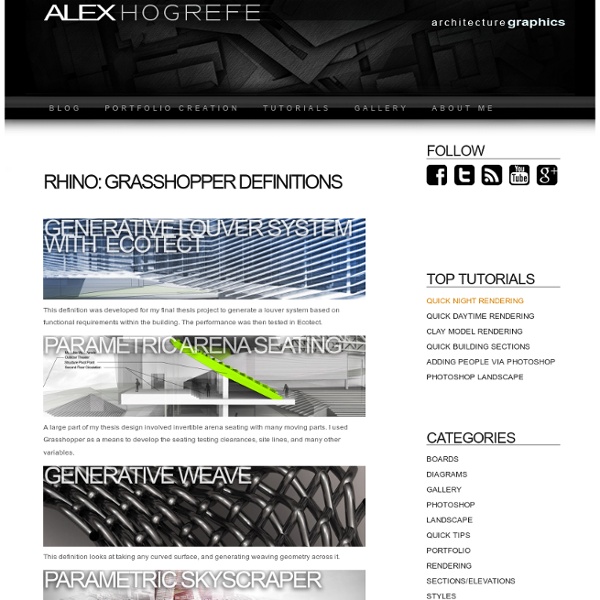 This definition was developed for my final thesis project to generate a louver system based on functional requirements within the building. The performance was then tested in Ecotect. A large part of my thesis design involved invertible arena seating with many moving parts. I used Grasshopper as a means to develop the seating testing clearances, site lines, and many other variables. This definition looks at taking any curved surface, and generating weaving geometry across it. The parametric skyscraper uses Grasshopper to generate the entire structure. My favorite definition to date, this definition generates box designs based on real boxes I crafted in the wood shop while in Grad school This definition extrudes geometry based on their proximity to a polyline attractor. Using a definition created by paramod, I wanted to see if I could edit the definition so that different panels could be combined to create a seamless surface This was one of the first definitions from scratch I ever created.

Mosquito | Studio Nu | SOCIAL MEDIA FaceBook plugin Working again!: The plugins have been reprogrammed so to work with the new Facebook OAuth API. NEW Record Media plugin: Allows you to record social media information from the media components over time without duplicates. Might be complex for some to use at first. Check to example files included and it should be self explanatory, else send me a msg and i will try to help Twitter Working again! Ducplicates: The duplicate component has been updated so to make things easier when recordeding tweets and deleting duplicates. Flickr: Search twitter database for photos based on location and tag/title. ImageDownload: Download images from Flickr or Twitter plugins. Bug Fixes: Fixed bugs with Twitter API access and new functions in String Duplicate component. GoogleMaps : Now works for all users, if it was crashing Rhino before , this should fix it. GoogleDirection : get a route and the directions from one location to another, with distance, time, and steps. Flickr Image-Download Steps Topsy

Geometry Gym Tutorials Introduction to Grasshopper Videos by David Rutten. Wondering how to get started with Grasshopper? Look no further. Dario Donato director di SpatialConnection(s), incubatore di ricerca per una creatività matematica, ha il piacere di annunciare il libro: Contaminazioni creative digitali – Trascrizioni di una complessità algoritmica attraverso Rhino.Grasshopper Transcripts of a complexity algorithmic through Rhino and Grasshopper. If you’re looking for a nice collection of Grasshopper tutorials then jump over to Designalyze Here are a series of beginner and advanced tutorials from our friends at Studio Mode... This tutorial series was developed for the Design Studio AIR at the University of Melbourne, Faculty of Architecture, Building and Planning. Essential Mathematics 3rd Edition uses Grasshopper to introduce design professionals to foundation mathematical concepts that are necessary for effective development of computational methods for 3D modeling and computer graphics.

Grasshopper « WeWantToLearn.net Philosophical Statement: Inti: The Incan Sun God, his face portrayed as a gold disk from which rays and flames extended. Inti is the Sun and controls all that implies: warmth, light and sunshine. During the festival of Inti Ramyi, held during the Summer Solstice, Inti is celebrated with much drinking, singing and dancing - special statues are made of wood are burned at the end of the festival. This sculpture is an extended physical manifestation of this; decadent ritualism and a spiritual experience. Inti incorporates 288 petals are self-assembled into 12 concentric rings, with each petal representing the hours of the day and each ring every month of the year. ‘Timber-Wave’; a plywood instillation emerging and crashing on to the desolate Black Rock Desert. The design of the Timber Wave was driven by creating an interactive environment. Physical Statement: ‘Timber-Wave’ structure consists of 3 layers of 12 intersecting plywood ribbons. 1:20 Scale Model Taking people as the pollen. Walker:

Rhino ++ Grasshopper – Plethora Project Plethora-Project.com is an initiative to accelerate computational literacy in the frame of architecture and design. It aligns with the "show me your screens" motto of the TopLap live-coding group attempting to get rid of Obscurantism in digital design. Directed by Jose Sanchez Contact me at : jomasan@gmail.com Bio: Jose Sanchez is an Architect / Programmer / Game Designer based in Los Angeles, California. Computational design CTM.08­ – Unpredictable Festival for Adventurous Music and Related Visual Arts Generator.x 2.0: Beyond the Screen 24 Jan -­ 2 Feb 2008, Ballhaus Naunynstrasse / [DAM] Berlin Workshop / Exhibition / Performance Generator.x in collaboration with Club Transmediale and [DAM] presents Generator.x 2.0: Beyond the screen, a workshop and exhibition about digital fabrication and generative systems. Digital fabrication (also known as “fabbing”) represents the next step in the digital revolution. After years of virtualization, with machines and atoms being replaced by bits and software, we are coming full circle. For artists and designers working with generative systems, digital fabrication opens the door to a range of new expressions beyond the limits of virtual space. "Beyond the screen" explores these new types of spatial constructs in a hands-on workshop, bringing together artists and designers working with code-based strategies for producing physical form. Call for participants

Co-de-iT | Computational Design Italy FABRICATION STUDIO for CNC LASER CUTTING | Universidad Europea de Madrid Kinetic architecture (1/3) « VANGUARQ Kinetic architecture (1/3) fLUX, Binary Waves – Lab[au] Another great project by LAb[au], “fLUX binary waves” is an urban and cybernetic installation based on the measuring of infrastructural ( passengers, cars…) and communicational ( electromagnetic fields produced by mobile phones, radio…) flows and their transposition into luminous, sonic and kinetic rules. This relation between the installation and the urban activity happens in real time and sets each person as an element of the installation, as a centre of the public realm. The installation fLUX, binary waves is constituted by a network of 32 rotating and luminous panels of 3 meter-high and 60 centimetres wide, placed every 3 meters to form a kinetic wall. The panels rotate around their vertical axis, and have a black reflective surface on one side, the other being plain mat white. Shih Chieh Huang Installation artist Shih Chieh Huang transforms spaces with everyday objects. The exhibition is on till June 6th 2009 Spinning Streetlights

grasshopper code . a collection of codes & grammars for Grasshopper, a generative modeling tool for Rhinoceros. 3D Hilbert Curve This definition generates a 3D Hilbert Curve, a continuous fractal space-filling curve. 3D_Hilbert_Curve_Co-de-iT_1.0007.zip nGon mesh tessellation Starting from a closed surface it builds a nGon mesh tessellation nGon_tessellation_Co-de-iT_1.0007.zip Curves Sorter Starting from a list of curves it takes the first one then it looks for the closest curve and it eventually flips the direction to optimize the toolpath lenght. Curves_Sorter_Co-de-iT_1.0007.zip froGH A sparse collection of tools for Grasshopper. See the code, explanation and download here. Clusterizer This definition groups indexes of connected points into separate clusters. Clusterizer_Co-de-iT_0.9.0076.zip Spirograph This definition simulates a spirograph tool. Spirograph_Co-de-iT_0.9.0076.zip 3D Differential mesh relaxation This definition explores the 3D relaxation of a mesh effected by an image gradient. Vorospace Math surfaces .

Owen Architects - Online Professional Portfolio Experimenting with trusses. There are many ways to make a truss, this is a simple method and ready to apply to (almost) any surface just define which surface you wish to use and it will automativally generate it. Make sure to use the expanded version of the definition when dealing with more complicated surfaces (shown to the left in dark green). I have included a Rhino 3D model of this design for of this design for anyone wishing to use it or play with it, unfortunately the Grasshopper definition I used to make the waffle structure can't be found anymore.