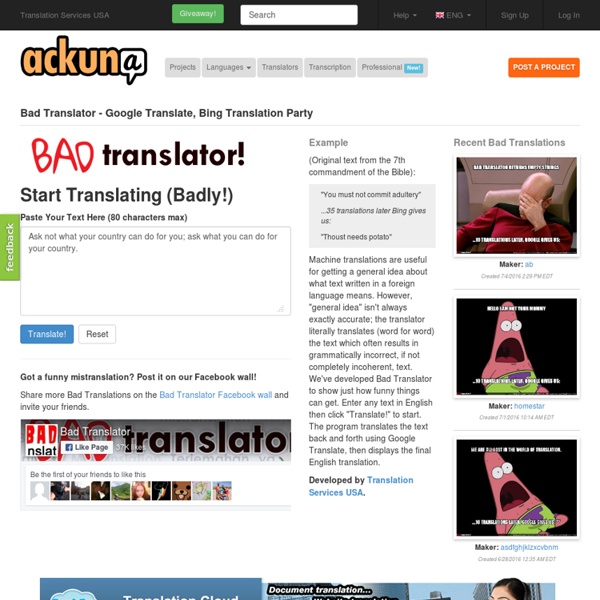 Machine translations are useful for getting a general idea about what text written in a foreign language means. However, "general idea" isn't always exactly accurate; the translator literally translates (word for word) the text which often results in grammatically incorrect, if not completely incoherent, text. We've developed Bad Translator to show just how funny things can get. Enter any text in English then click "Translate!" to start. The program translates the text back and forth using Babelfish, Bing, FreeTranslation.com, and TransPerfect, then displays the final English translation. Developed by Ackuna Translator. Example (original text from the 7th commandment of the Bible): "You must not commit adultery" ...35 translations later Bing gives us: "Thoust needs potato"

Commute Map In Traffic: Why We Drive the Way We Do (and What It Says About Us), the author states that commute times throughout history have remained steady at roughly a half hour in each direction. Advances in transportation technology (our feet, horses, bicycles, trains, automobiles, flying cars, etc.) allow us to live farther from where we work. This got me thinking about my own commute from Berkeley to San Francisco, how it compares to those of my neighbors, and how commutes vary across the country. This visualization draws a red circle at the center of each zip code indicating the number of people who travel to or from that area.

Kenny Translator - translate text into Kennyspeak <p>Unfortunately, your browser is not configured for running JavaScript software, so the Kenny Translator won't work for you. Sorry! :(</p><p>Please ensure you have JavaScript enabled in the preferences menu on your browser (JavaScript is supported by Safari, Firefox, Opera 3.21+, Netscape Navigator 3+, and Internet Explorer 3+). If you are not running any of these browsers, you might like to try the <a href="downloads.html">downloadable Kenny Encryptor</a> by <a href=" which is fully compatible with the online version.

Does The Dog Die? #TubeClash - The Movie There are "wookies" in the movie that look little like the ones in Star Wars, but are more like cute little fuzzballs. One of them is killed by a character by being cut in half, being mistaken for a monster. It however comes back to life as a zombie and appears as such for the rest of the movie and its sequels. So despite being killed, it is undead for most of its on-screen time and still has its consciousness. There are also other zombie wookies, but we don't see them die.

10 Terrifying Planets You Don't Want To Visit Space Space exploration is a grand adventure. Its mystery has always captivated us and the inevitable discoveries to come will add to the many cosmological insights we already have. Artist Captures Pizzas Hanging Out in Unusual Places Artist and photographer Jonpaul Douglass cannot be accused of being boring or lacking in humor. In his fantastic series, Pizzas in the Wild, we see pizzas appearing in the most unusual places. Pizza hubcaps adorn cars. A pizza appears to have been mistaken for a basketball and is now stuck to the rim. A pizza takes a leisurely romp on horseback. An army tank has been left defenceless as a pizza plugs its cannon.

Face substitution This is a demo of face substitution using the javascript library clmtrackr. Keep your face still until the facemodel has fitted and try out different masks from the dropdown. Note that the face substitution works best with good, even lighting. Origins of Common UI Symbols hat do Swedish campgrounds and overuse of the Apple logo have in common? A lot, according to Andy Hertzfeld of the original Mac development team. While working with other team members to translate menu commands directly to the keyboard, Hertzfeld and his team decided to add a special function key. The idea was simple: When pressed in combination with other keys, this “Apple key” would select the corresponding menu command.