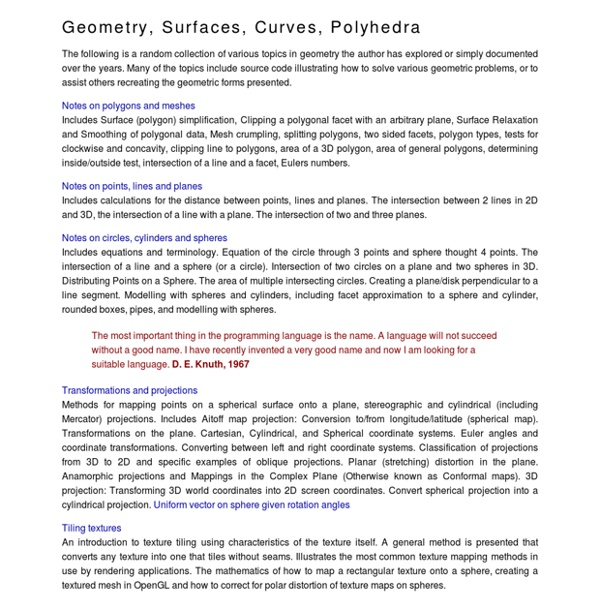 Notes on polygons and meshes Includes Surface (polygon) simplification, Clipping a polygonal facet with an arbitrary plane, Surface Relaxation and Smoothing of polygonal data, Mesh crumpling, splitting polygons, two sided facets, polygon types, tests for clockwise and concavity, clipping line to polygons, area of a 3D polygon, area of general polygons, determining inside/outside test, intersection of a line and a facet, Eulers numbers. No amount of genius can overcome a preoccupation with detail. Law 8, Marion Levy Jr. Notes on points, lines and planes Includes calculations for the distance between points, lines and planes. The only thing that saves us from the bureaucracy is its inefficiency. Notes on circles, cylinders and spheres Includes equations and terminology. Transformations and projections Methods for mapping points on a spherical surface onto a plane, stereographic and cylindrical (including Mercator) projections. Texture library I don't do drugs. Tiling tricurves Other ...

Space Symmetry Structure Floraform – an exploration of differential growth Introducing Floraform, the latest generative design system from Nervous System. Floraform is inspired by the biomechanics of growing leaves and blooming flowers and explores the development of surfaces through differential growth. We used this system to computationally craft a new 3D-printed jewelry collection, now available on our website. Floraform is a simulation of a differentially growing elastic surface that we created to explore how biological systems create form by varying growth rates through space and time. It began with an unusual flower, Celosia cristata, and led us through a journey of cellular differentiation, discrete differential geometry, kleptoplastic sea slugs, nastic movements, and 19th century zoetropes. Table of Contents // what is differential growth | inspiration | mapping out the simulation space | digital gardening | florescence jewelry collection | what’s next | technical details | bibliography What is Differential Growth? Mapping out the simulation space 1. 2.

The Geometry of Bending Matouš Stieber Grasshopper (Explicit History) Same Area Voronoi using Galapagos I have been quite fascinated by the recent development of Galapagos for Grasshopper. This is a simple example of its application set up to solve for a 10-point voronoi division within a user-defined boundary where all the parts are divided as equally as possible in terms of their areas. I ran this with an initial population of a hundred for 200 generations. Gradient Patterns Testing different patterns with grasshopper. Pagora Bench Playing with hopper and Maxwell 2 Two Surfaces Twisted Box It’s been a while I’ve played with Grasshopper. In order to use the definition, first define a box, and some geometries within the box as your base component. Two Surface Space Frame (Rhino Explicit History) Ah so, the new version of the Explicit History plug-in for Rhino is out. This is another way of creating space frames using U/V divisions from two surfaces. crtli_gh_space_frame.wrmcrtli_gh_space_frame.3dm Explicit history example files

Recursion The idea of calling one function from another immediately suggests the possibility of a function calling itself. The function-call mechanism in Java supports this possibility, which is known as recursion. Your first recursive program. The "Hello, World" for recursion is the factorial function, which is defined for positive integers n by the equation The quantity n! is easy to compute with a for loop, but an even easier method in Factorial.java is to use the following recursive function: We can trace this computation in precisely the same way that we trace any sequence of function calls. Our factorial() implementation exhibits the two main components that are required for every recursive function. The base case returns a value without making any subsequent recursive calls. Mathematical induction. Recursive programming is directly related to mathematical induction, a technique for proving facts about natural numbers. Euclid's algorithm. Towers of Hanoi. Exponential time. Gray code. Brownian bridge.

WooJae's Blog Parametric Patterns X.1: Recursion, encore Ha, a little recursion joke there . . . sorry I’ve been messing around more with Steven’s methods for creating recursion and finding some really simple, interesting and flexible methods that live within it. Conceptually and Actually simple to set up This is the most iconic example I can think of And damn if it isn’t easy to make! Performance: Simple and complex models Complexity in these models doesn’t effect performance in a linear manner, but it seems exponential. but this one, with only model lines but with 8 parameters (some of which don’t even get used) takes over 2 minutes to regenerate. Shared Families, using Placeholders Key to the setup of the basic recursive structure is having 2 identical unshared families, each nested into each other. Recursion with Placeholders This persistent rising to the top is interesting for recursion, as it creates an opportunity to plant a parametric seed at the root of a recursive system. Triggering Events during recursion The answer is a resounding “YES!”