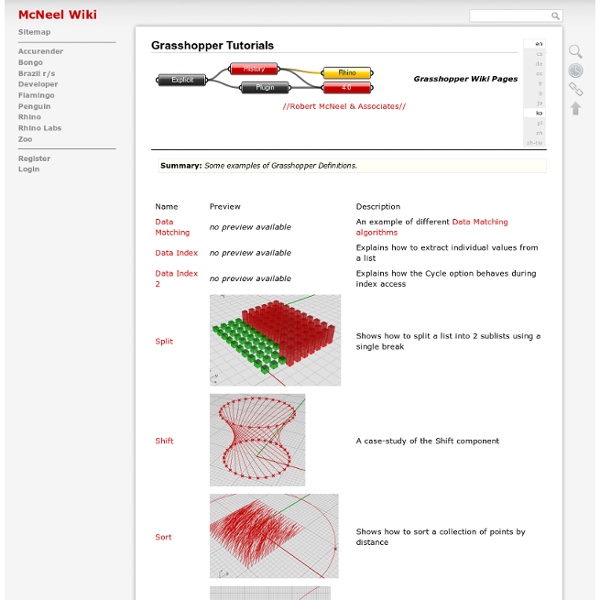 Tutorial 3 - Reciprocal Systems - AAET picture: arup agu This tutorial will show how a reciprocal system can be constructed using Rhino, Grasshopper as design environment to inform a physical model. Download Tutorial as pdf - workshopsafd8-digitalmaterialandfabrication-tut3-reciprocal Download Rhino and Grasshopper file example of the GH definition colouring sticks by length This post is created by: Martin Tamke This post is tagged

BFXlog FreeFormFever BIM Plugin and Tools Development - Geometry Gym Space Symmetry Structure Geometry, Surfaces, Curves, Polyhedra Notes on polygons and meshes Includes Surface (polygon) simplification, Clipping a polygonal facet with an arbitrary plane, Surface Relaxation and Smoothing of polygonal data, Mesh crumpling, splitting polygons, two sided facets, polygon types, tests for clockwise and concavity, clipping line to polygons, area of a 3D polygon, area of general polygons, determining inside/outside test, intersection of a line and a facet, Eulers numbers. No amount of genius can overcome a preoccupation with detail. Law 8, Marion Levy Jr. Notes on points, lines and planes Includes calculations for the distance between points, lines and planes. The intersection between 2 lines in 2D and 3D, the intersection of a line with a plane. The only thing that saves us from the bureaucracy is its inefficiency. Notes on circles, cylinders and spheres Includes equations and terminology. Tiling textures An introduction to texture tiling using characteristics of the texture itself. Texture library I don't do drugs.

RHINO: GRASSHOPPER DEFINITIONS - RHINO / GH This definition was developed for my final thesis project to generate a louver system based on functional requirements within the building. The performance was then tested in Ecotect. A large part of my thesis design involved invertible arena seating with many moving parts. I used Grasshopper as a means to develop the seating testing clearances, site lines, and many other variables. This definition looks at taking any curved surface, and generating weaving geometry across it. The parametric skyscraper uses Grasshopper to generate the entire structure. My favorite definition to date, this definition generates box designs based on real boxes I crafted in the wood shop while in Grad school This definition extrudes geometry based on their proximity to a polyline attractor. Using a definition created by paramod, I wanted to see if I could edit the definition so that different panels could be combined to create a seamless surface This was one of the first definitions from scratch I ever created.

Grasshopper Modules - Proxy Wiki From Phylogenesis, FOA 2003 The following Grasshopper modules were created in consultation with FOA's Phylogenesis, in particular the taxonomy of forms found at the conclusion of the book. Grasshopper is an exciting and evolving modeling platform - the following examples attempt to develop a range of geometric examples to explore its form-making potentials. Andrew Payne, a GSAPP alum, has created a comprehensive primer on Grasshopper that can be found here. You should have this handy for reference. Helpful Modules These modules are provided to supplement Grasshopper with a few simple features. Truss Module Grasshopper 3D Truss This module creates an offset truss from a given surface. Point Topology The simplest form of data to work with, points can be propagated into 3D space and can have geometry mapped to them. A Matrix is a 3-Dimensional point set, interpreted as a field of voxels. Download Rhino File Matrix.3dmDownload Grasshopper definition Example-Matrix.ghx Line Topology

Grasshopper » VITRUALITY In this session we will be looking at some more advanced components and methods of using grasshopper, principally focussing on Galapagos, Grasshopper’s built-in genetic algrithm solver. Along the way, we’ll also be examining Grasshopper’s metaball component and means of flow control – the Grasshopper equivalent of ‘if statements’ in coding. Example 7: Galapagos Galapagos is best used to solve problems to which the optimal solution is not immediately obvious. The first step is to obtain our set of points – you can either use the one in the example file provided or create your own using the Points command and clicking lots. In Grasshopper we will reference in these points in the usual way – add a Point parameter component, right click and select ‘Set multiple points’. Now we want some way of drawing a closed cuve through those points. Metaballs The centre of each metaball might be considered an energy source with a falloff in the level of energy with distance from the point. Galapagos Max. 1.