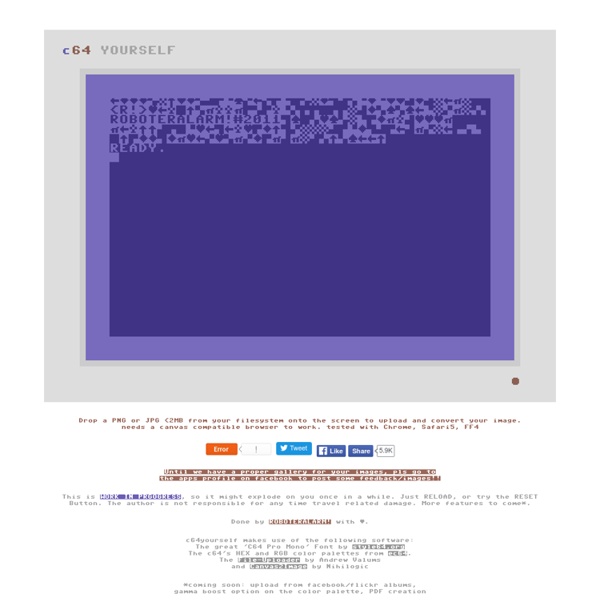 ShapeShifter - What Creative Designers Do in Their Spare Time Sit back, ignore everything else and take in this stunning piece of animation from creative design studio Charlex. Although the vast bulk of their work is in advertising this represents something completed in-house for the sheer joy of it. Director of Charlex, Alex Weil asked a few of the company's designers to come up with a project of their own - to enable their creativity to have an outlet unburdened by the demands of their usual projects.This allowed the team to experiment and explore, starting with an empty canvas. The one mandate was that from this emptiness something great had to come. I think you will probably agree that it did. The original concept came from Co-Director and Designer Diana Park.

Victorian Era Names, A Writer's Guide circa 1840's-1890's Being a compilation drawn from old census and vital statistic records. A large part of creating a good set of characters in fiction writing is giving your imaginary populace good names. The right name resonates on the tongue and lingers in the mind, as just the right "fit" for who that heroic - or despicable - person was. Who can forget "Captain Ahab" and his manic pursuit of the Great White Whale, or the plain-spoken, earthy spirit of "Tom Sawyer," or the stern lyricism of "Sherlock Holmes?"

davidcopithorne 2013 Demo Reel Motion Graphics Seascapes 3D Geometric Photography Twisted Photography 50 Things to Do When Bored Out of Your Mind Bored? Here's a list of ideas. Some are good idea provokers, and others are just for fun! The History of Rock Music. Faust: biography, discography, reviews, links (Translated from the Italian by Troy Sherman) Their first album, Faust (Polydor, 1971), their (and one of rock music’s) masterwork, contains three lengthy musical digressions. These Dadaist collages and explorations in musique concrete make a very free use of "found sounds."

Kitchen Tips 1. Stuff a miniature marshmallow in the bottom of a sugar cone to prevent ice cream drips. 2. Architecture Imagine the renovation dilemmas. A huge penthouse of a converted 1930s office building in TriBeCa, New York, is to be turned into a functioning home for a family with three teenagers. In fact, we can not quite imagine the issues that faced Steven Harris Architects when the family showed up, literally, at the doorstep of the celebrated architect and asked if he’d like to work on their home. Harris said yes and proceeded to make his magic. The scale of the apartment is huge and the freedom from budget constraints allowed for some spectacular solutions.

300+ Mind Expanding Documentaries Source: www.diygenius.com | Original Post Date: January 12, 2014 – I watch a lot of documentaries. I think they are incredible tools for learning and increasing our awareness of important issues. The power of an interesting documentary is that it can open our minds to new possibilities and deepen our understanding of the world. On this list of mind expanding documentaries you will find different viewpoints, controversial opinions and even contradictory ideas. Critical thinking is recommended. 50 Kick-Ass Websites You Need to Know About Fatburgr.com Count your Calories Also a popular iPhone app, Fatburgr helps you count calories and make healthier decisions when eating out at various popular dine-in and fast food restaurants. Simply pick your poison (ours is Panera Bread) and Fatburgr will present you with an alphabetical list of the restaurant’s entire food inventory with the number of calories, grams of fat, carbohydrates, and fiber in each serving. If you take a look, you might be surprised at the lack of nutrition surrounding some of your favorite dishes.

Ancient underwater cities being found that are 10,000 years old Lost city 'could rewrite history' By BBC News Online's Tom Housden The remains of what has been described as a huge lost city may force historians and archaeologists to radically reconsider their view of ancient human history. Editor's Choice Notifications See all notifications All categories Marvin King www.bbc Explore BBC Earth's unique interactive, personalised just to you. Find out how, since the date of your birth, your life has progressed; including how many times your heart has beaten, and how far you have travelled through space. Investigate how the world around you has changed since you've been alive; from the amount the sea has risen, and the tectonic plates have moved, to the number of earthquakes and volcanoes that have erupted. Grasp the impact we've had on the planet in your lifetime; from how much fuel and food we've used to the species we've discovered and endangered.