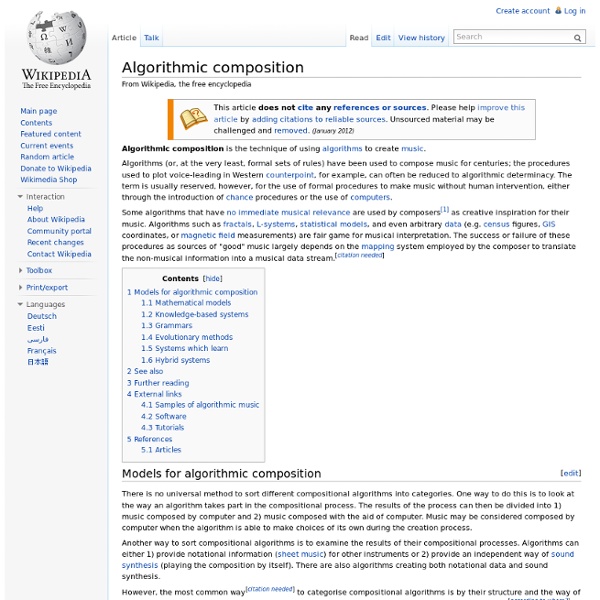 Algorithmic composition is the technique of using algorithms to create music. Algorithms (or, at the very least, formal sets of rules) have been used to compose music for centuries; the procedures used to plot voice-leading in Western counterpoint, for example, can often be reduced to algorithmic determinacy. The term is usually reserved, however, for the use of formal procedures to make music without human intervention, either through the introduction of chance procedures or the use of computers. Some algorithms or data that have no immediate musical relevance are used by composers[1] as creative inspiration for their music. Algorithms such as fractals, L-systems, statistical models, and even arbitrary data (e.g. census figures, GIS coordinates, or magnetic field measurements) have been used as source materials. Models for algorithmic composition[edit] There is no universal method to sort different compositional algorithms into categories. Mathematical models[edit] Grammars[edit] Related:  Experimental Composers

Aleatoric music - Scorepedia Aleatoric music (also aleatory music or chance music; from the Latin word alea, meaning "dice") is music in which some element of the composition is left to chance, and/or some primary element of a composed work's realization is left to the determination of its performer(s). The term is most often associated with procedures in which the chance element involves a relatively limited number of possibilities. The term became known to European composers through lectures by acoustician Werner Meyer-Eppler at the Darmstadt International Summer Courses for New Music in the beginning of the 1950s. According to his definition, "a process is said to be aleatoric ... if its course is determined in general but depends on chance in detail" (Meyer-Eppler 1957, 55). History Early precedents Compositions that could be considered a precedent for aleatory composition date back to at least the late 15th century, with the genre of the catholicon, exemplified by the Missa cuiusvis toni of Johannes Ockeghem.

A guide to Steve Reich's music It's rare that one says this about a contemporary composer, but it's become too easy to take Steve Reich for granted. Of course, that's a sign of just how influential his music has been, the way it has drawn on everything from African drumming to concept art, and how it has influenced generations of pop, jazz and classical musicians over the last half-century. In fact, if you were to subtract Steve Reich from the total sum of today's musical culture, I think you'd notice more of a difference than if you took away any other single figure. Even if you think you don't know Reich's music directly, you will almost certainly be familiar with what it does, thanks to the way his music and his example have been refracted by other composers in other fields. Later, Reich found a way of using tonal and modal chords but unmooring them from any conventional harmonic function (in Six Pianos and the final part of Drumming). Reading this on mobile? Reich's influence is bigger than any single piece.

Appendix 1: The Hidden Markov Model Representation of a Query As shown in Figure 1, the user's query is transcribed by a pitch tracker into a form usable by MusArt. The query is recorded as a .wav file and then transcribed into a MIDI1-based representation using an enhanced autocorrelation algorithm [2]. Figure 1: MusArt Architecture MIDI is to a digital audio recording of music as ASCII is to a bitmap image of a page of text. Figure 1A: A sung query The pitch tracker divides the input file into 10 millisecond frames and tracks pitch on a frame-by-frame basis. Figure 1A shows a time-amplitude representation of a sung query, along with example pitch-tracker output (shown as piano roll) and a sequence of values derived from the MIDI representation (the deltaPitch, IOI and IOIratio values). We define the following. A note transition between note n and note n+1 is described by the duple <deltaPitch, IOIratio>. We represent a query as a sequence of note transitions. Markov Representation A set of states, S={s1, s2, s3,…, sn}.

Arvo Pärt Arvo Pärt (Estonian pronunciation: [ˈɑrvo ˈpært]; born 11 September 1935) is an Estonian composer of classical and sacred music.[1] Since the late 1970s, Pärt has worked in a minimalist style that employs his self-invented compositional technique, tintinnabuli. His music is in part inspired by Gregorian chant. As of 2013, Pärt has been the most performed contemporary composer in the world for three years in a row.[2] Life[edit] Pärt was born in Paide, Järva County, Estonia, and was raised by his mother and stepfather in Rakvere in northern Estonia. He began to experiment with the top and bottom notes as the family's piano's middle register was damaged.[3] His first serious study came in 1954 at the Tallinn Music Middle School, but less than a year later he temporarily abandoned it to fulfill military service, playing oboe and percussion in the army band. In 1980, after a prolonged struggle with Soviet officials, he was allowed to emigrate with his wife and their two sons. Works[edit]

Elliott Carter He was extremely productive in his later years, publishing more than 40 works between the ages of 90 and 100,[1] and over 20 more after he turned 100 in 2008.[2] His last work, Epigrams for piano trio, was completed on August 13, 2012.[3] Biography[edit] Elliott Cook Carter Jr. was born in Manhattan on December 11, 1908, the son of a wealthy lace importer. Carter's father was Elliott Carter Sr. and his mother was the former Florence Chambers. On December 11, 2008, Carter celebrated his 100th birthday at Carnegie Hall in New York, where the Boston Symphony Orchestra and pianist Daniel Barenboim played his Interventions for Piano and Orchestra written that year. On February 7, 2009, he was given the Trustees Award (a lifetime achievement award given to non-performers) by the Grammy Awards.[5] He was on the faculty of the Tanglewood Music Center, where he gave annual composition master classes. Carter died of natural causes on November 5, 2012 at his home in New York City, at age 103.[7]

Georg Friedrich Haas’s Works Are Rooted in Microtonality Photo “Is the idea that this is the right world, and this is the destroyed world?” the Austrian composer Georg Friedrich Haas asked recently, after playing and comparing the same chord on the three upright Yamaha pianos — each tuned differently — that form a triangle in his small studio at Columbia University. “This is not the wrong piano and the right piano,” Mr. Haas added during the lesson with Stylianos Dimou, a doctoral composition student, referring to the startling harmonies that sounded after he played the chord on the piano not tuned to the conventional Western scale. Alternate tunings and the alluring sonorities they produce have long fascinated Mr. Mr. In Mr. Classical musicians are usually not taught how to perform quarter-tone music at conservatories, and alternate tunings and harmonics can prove challenging for performers. John Pickford Richards, the JACK Quartet’s violist, said that Mr. “I would be interested in how someone who cannot see could perceive it,” he said. Mr.

George Crumb Biography[edit] Crumb was born in Charleston, West Virginia, and began to compose at an early age. He studied music first at the Mason College of Music in Charleston where he received his Bachelor's degree in 1950. He obtained his Master's degree at the University of Illinois at Urbana-Champaign, and then briefly studied in Berlin before returning to the United States to study at the University of Michigan, from which he received his D.M.A. in 1959. Crumb retired from teaching in 1997, though in early 2002 was appointed with David Burge to a joint residency at Arizona State University. Crumb has been the recipient of a number of awards, including the Pulitzer Prize for Music in 1968 for his orchestral work Echoes of Time and the River and a Grammy Award for Best Contemporary Composition in 2001 for his work Star-Child . Crumb's son, David Crumb, is a successful composer and, since 1997, assistant professor at the University of Oregon. Crumb's music[edit] Works[edit] Orchestral[edit]

Getting Started With Algorithmic Composition | Algorithmic Composer This page is a quick how to guide to get you started with Algorithmic Composition. Step One: Choose your software Max/MSP You can buy Max/MSP from www.cycling74.com Max is a graphical dataflow language where you connect objects together in a similar manner to a studio patchbay. Price: $399 Platforms: OSX and Windows PureData Puredata (or Pd) is a free open-source alternative to Max and is a similar visual programming language. Price: Free Platforms: OSX, Windows and Linux OpenMusic Open Music is a visual programming language for algorithmic composition that is written in LISP. CommonMusic Common Music (CM) is another Lisp based algorithmic composition environment. Slippery Chickenslippery chicken is an open-source algorithmic composition system written in Common Lisp which enables a top-down approach to music composition. Symbolic Composer SCOM is rich on generative functions, which enable to quickly create source material for your scores. Step Two

HISTORY 204 - THE REACTION AGAINST SERIALISM 1. Ascendancy of serialism in 1950's -- It was the only show in town - i.e. it was the dominant form of "new music" (except for Cage and a few American crazies) - everything else was "old hat" - Even successful composers like Copland, Britten and Stravinsky gave it a try Reaction against serialism took at least 4 forms: 1. Texture music - Ligeti, Penderecki 2. 3. 4. These styles have other motivations besides reaction to serialism, and serialism persists vigorously today, especially in the USA -- However, the issue was perceived at time (c.1960) as serialism vs. all comers, and several well-known (or later well-known) composers abandoned serialism during 1970s – e.g. 2. NB - This is not an official definition - It's based on the work of my student Randy Foy -- No one else uses the term, and many would probably reject it WHY would "texture music" be perceived as alternative to serialism? Examples of composers in this style: Ligeti, Penderecki, Xenakis 3. PLAY beginning as example of notation

John Adams | Shaker Loops for string septet (1978) Shaker Loops was composed in the fall of 1978 using fragments from a string quartet, Wavemaker, written earlier in that year. First performance: December, 1978 in Hellman Hall, San Francisco by the New Music Ensemble of the San Francisco Conservatory, conducted by the composer. The version for string orchestra was made in 1983 and first performed in April of that year at Tully Hall, New York, by the American Composers Orchestra conducted by Michael Tilson Thomas. The original "modular" score, published by Associated Music Publisher, has since been withdrawn and replaced by the 1983 "string orchestra" version. The "string orchestra" version can be played either by a septet of soloists or by a string orchestra of any size. 3 violins, 1 viola, 2 celli, 1 contrabass I. Duration: 24 minutes John Adams on Shaker Loops: Shaker Loops began as a string quartet with the title Wavemaker. Shaker Loops continues to be one of my most performed pieces. ↑ Return to top of page