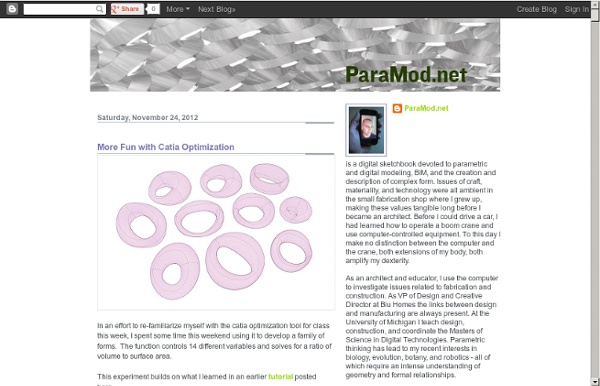 Grasshopper (Explicit History) Same Area Voronoi using Galapagos I have been quite fascinated by the recent development of Galapagos for Grasshopper. This is a simple example of its application set up to solve for a 10-point voronoi division within a user-defined boundary where all the parts are divided as equally as possible in terms of their areas. Gradient Patterns Testing different patterns with grasshopper. Pagora Bench Playing with hopper and Maxwell 2 Two Surfaces Twisted Box It’s been a while I’ve played with Grasshopper. In order to use the definition, first define a box, and some geometries within the box as your base component. Two Surface Space Frame (Rhino Explicit History) Ah so, the new version of the Explicit History plug-in for Rhino is out. This is another way of creating space frames using U/V divisions from two surfaces. crtli_gh_space_frame.wrmcrtli_gh_space_frame.3dm Rhino Explicit History Surface Blend

Rhinoscript | neoarchaic Posts Tagged ‘Rhinoscript’ This simple rhinoscript, developed to randomize sets of objects for material application in rendering, allows the user to select a set of objects and place them into a user specified number of groups. Part of a library of environmental effect graphic generators this Rhino Script produces a series of lines which fall like rain upon Rhino’s cplane. In using laser cut files directly out of Rhino, I consistently found the need for a command similar to “overkill” in Autocad for Rhino. This rhinoscript takes a series of points selected in sequence and creates a bezier curve using the geomtetric method of construction. Ever wanted to use the Illustrator blend tool in Rhino, but just too lazy to do all the leg work to simulate it. This Rhino Script take a surface and subdivides it into a grid. This Rhino Script breaks a curve down into a series of equadistant points represented as lines. A tool developed to expedite fabrication. Well, I finally made one.

Grasshopper Modules - Proxy Wiki From Phylogenesis, FOA 2003 The following Grasshopper modules were created in consultation with FOA's Phylogenesis, in particular the taxonomy of forms found at the conclusion of the book. Grasshopper is an exciting and evolving modeling platform - the following examples attempt to develop a range of geometric examples to explore its form-making potentials. Andrew Payne, a GSAPP alum, has created a comprehensive primer on Grasshopper that can be found here. Helpful Modules These modules are provided to supplement Grasshopper with a few simple features. Truss Module Grasshopper 3D Truss This module creates an offset truss from a given surface. Point Topology The simplest form of data to work with, points can be propagated into 3D space and can have geometry mapped to them. A Matrix is a 3-Dimensional point set, interpreted as a field of voxels. Download Rhino File Matrix.3dmDownload Grasshopper definition Example-Matrix.ghx A sparse matrix takes a matrix and set of points as inputs.

The Proving Ground by Nathan Miller RHINO: GRASSHOPPER DEFINITIONS - RHINO / GH This definition was developed for my final thesis project to generate a louver system based on functional requirements within the building. The performance was then tested in Ecotect. A large part of my thesis design involved invertible arena seating with many moving parts. I used Grasshopper as a means to develop the seating testing clearances, site lines, and many other variables. This definition looks at taking any curved surface, and generating weaving geometry across it. The parametric skyscraper uses Grasshopper to generate the entire structure. My favorite definition to date, this definition generates box designs based on real boxes I crafted in the wood shop while in Grad school This definition extrudes geometry based on their proximity to a polyline attractor. Using a definition created by paramod, I wanted to see if I could edit the definition so that different panels could be combined to create a seamless surface This was one of the first definitions from scratch I ever created.

grasshopper (As reported earlier in this previous post) Daniel Piker is developing ways to accurately simulate physical behavior in his Grasshopper component "Kangaroo". In the latest release there are tools for simulating bending geometry. This is nothing but a revolution for this investigation! Never before have I been able to recreate bending geometry so accurately in an "artificial way". 3d-bending of developable surfaces is a little more tricky and requires a careful setup to make sure the surfaces stay developable. Kangaroo works in an iterative way by letting some predefined forces (like springs, bending resistance, pressure and gravity) affect the geometry, step by step, until (usually) a stable solution is reached. For more reading on how Kangaroo deals with bending, Daniel Piker has recommended a paper written in 1998 by S.M.L. Many thanks to Daniel Piker for making and sharing the Kangaroo!

Geometry, Surfaces, Curves, Polyhedra Notes on polygons and meshes Includes Surface (polygon) simplification, Clipping a polygonal facet with an arbitrary plane, Surface Relaxation and Smoothing of polygonal data, Mesh crumpling, splitting polygons, two sided facets, polygon types, tests for clockwise and concavity, clipping line to polygons, area of a 3D polygon, area of general polygons, determining inside/outside test, intersection of a line and a facet, Eulers numbers. No amount of genius can overcome a preoccupation with detail. Law 8, Marion Levy Jr. Notes on points, lines and planes Includes calculations for the distance between points, lines and planes. The only thing that saves us from the bureaucracy is its inefficiency. Notes on circles, cylinders and spheres Includes equations and terminology. Transformations and projections Methods for mapping points on a spherical surface onto a plane, stereographic and cylindrical (including Mercator) projections. Texture library I don't do drugs. Tiling tricurves Other ...