Everything You Need to Know About Planet Earth 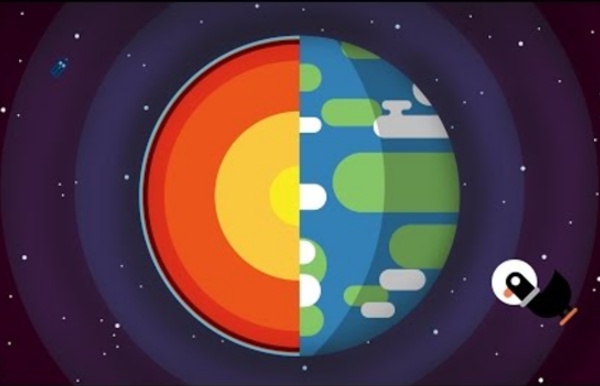 Related:  Curiosities of the biosphere • Journalism Inspiration • 1 Structure of the Earth 1 FULL • GEOLOGY

Earth's Mysterious Hum Explained Even planets can get a bad case of tinnitus, according to a new study that explains Earth's mysterious, never-ending hum. Scientists have long known that earthquakes can make the Earth sing like a bell for days or months. However, in the late 1990s, seismologists discovered the world also constantly vibrates at very low frequencies even when there are no quakes. This so-called microseismic activity is too faint for humans to feel. Now, researchers say ocean waves are the culprit behind these mysterious tremors. Many scientists had previously turned to ocean waves to explain our planet's unusual humming.

How the world violates human rights, country by country This map provides a snapshot of the human rights violations identified by Human Rights Watch (HRW) in their 25th annual review. The analysis of more than 90 countries is undertaken with human rights activists in the respective countries and this year, Kenneth Roth, HRW director, said human rights violations were fuelling the rise of groups like Islamic State of Iraq and the Levant, Boko Haram and others. “Human rights violations played a major role in spawning or aggravating many of today’s crises,” Mr Roth said as the report was published on Friday. “Protecting human rights and ensuring democratic accountability are key to resolving them.”

How long will human impacts last? - David Biello This book, The Unnatural World, discusses more about the impact humans have had on the Earth and the new Geologic age called the Anthropocene. Also, take some time to read this post: You have been living in a new geologic time all along, from Ideas.TED.com. This video, The Anthropocene and the Near Future, discusses the Anthropocene and all of its implications. Someone Recorded Crickets then Slowed Down the Track, And It Sounds Like People Singing A composer by the name of Jim Wilson has recorded the sound of crickets and then slowed down the recording, revealing something so amazing. The crickets sound like they are singing the most beautiful chorus in perfect harmony. Though you may think it is human voices, everything you hear in this recording is in-fact crickets themselves! This recording contains two tracks played at the same time: The first is the natural sound of crickets played at regular speed while the second is the slowed down version of crickets’ voices. "UPDATE 11/27/13: Since this was posted, the story has gone viral and it's been revealed that it's it might not be 100 percent accurate.

Maricel: A maid’s tale Maricel Angeles, at the age of 29, has been many things: would-be nurse, university dropout, waitress, devoted single mother. Her child is the most important thing to her, so when job opportunities ran dry in her native Manila, and with her daughter soon to begin grade school, she made the difficult decision to leave her family behind and take on a new role as a domestic helper abroad. A friend had recommended a high-paying job in the Middle East - a well worn path thousands of Filipinos tread each year, seeking an overseas income that will stretch much further at home. Maricel’s mother, Leny Angeles, 58, had worked as a part-time caregiver in Canada - the same country where Maricel’s older sister Cheryl currently works as a Chili’s restaurant manager at Calgary International Airport. “It’s hard to apply [for jobs] in the Philippines, especially at my age,” Maricel says, in a husky voice that in another life could have landed her a job in radio. Maricel phoned Jamie twice each week.

What would happen if every human suddenly disappeared? - Dan This lesson was adapted from Alan Weisman’s 2007 book The World Without Us, which offers an in depth look at a post-human earth. The animation generally covers content from the book’s first two chapters, as well as some information from its closing sections. But the full text goes into great detail about earth’s pre-human past to uncover what it’s post-human future might look like. One of these sections discusses North American megafauna – a group of massive animals that roamed the hemisphere about 10,000 years ago. WTF Is This Weird Web-Tower Thing? We Asked Around. No One Knows - Wired Science So far, no one knows what’s crafting these enigmatic structures. Update, 1 p.m.: We’ve added comments from several more experts, below. Something in the Peruvian Amazon is making weird, intricate structures that resemble white picket fences surrounding an Isengard-like spire. No one has any idea who the mysterious craftsbug (fungus? spider?) is, or what the structure is even used for, excepting the fence part, which almost makes sense.

Stories Climate Refugees Reporter Anna York traveled to Newtok, Alaska, to see firsthand how the rising sea threatened the stability of the village and its residents. Down the lines As energy consumption increases, the construction of power lines has fallen behind, leaving the energy grid in jeopardy. Debating coal’s future Blood Falls, a "bleeding" glacier, is a natural time capsule containing a unique ecosystem Atlas Obscura on Slate is a new travel blog. Like us on Facebook, Tumblr, or follow us on Twitter @atlasobscura This five-story, blood-red "waterfall" pours ever so slowly out of the Taylor Glacier in Antarctica's McMurdo Dry Valley. Geologists first discovered the frozen waterfall in 1911, and believed the red color came from algae. Its true nature turned out to be more spectacular. Roughly two million years ago, a small body of water containing an ancient community of microbes was sealed beneath the surface of the Taylor Glacier.

Museum of Fine Arts in Boston opens new Art of the Americas Wing Exterior improvements continue at the museum — part of its ongoing efforts to embrace the Frederick Law Olmsted-designed Back Bay Fens, surround the building with greenery, and in so doing, help to rejuvenate the museum's neighborhood.