The Awl - Be Less Stupid 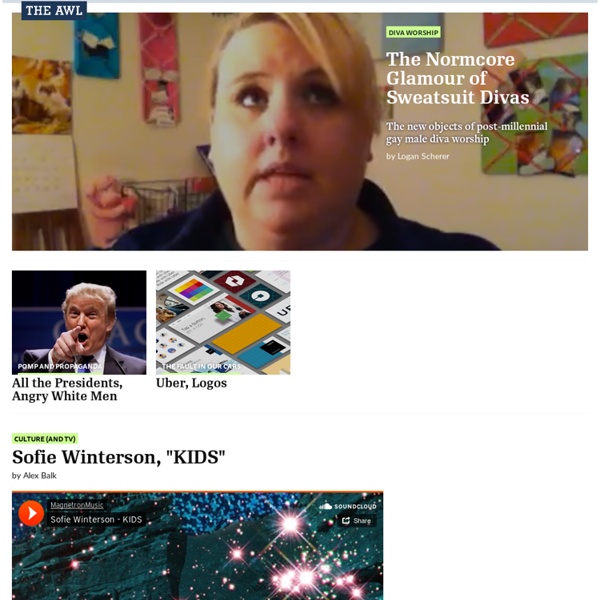 Who Will Save the Airbnb Faithful? In October, New York State Attorney General Eric Schneiderman issued a subpoena to Airbnb, ordering it to turn data about its 15,000 registered hosts in New York over to the state. While neither Airbnb nor its hosts pay the 15 percent lodging tax that most New York City hotels are subject to—no small part of the reason why startups like Airbnb have been able to "disrupt" the established hospitality industry—the attorney general's primary concern was not the stream of potential tax revenue trickling past the state's coffers. (Airbnb kindly offered to induce its users to pay the tax, which would amount to some $21 million.) Rather, it’s that Airbnb encourages potential violations of the 2010's "Illegal Hotels Bill," which made it unlawful to rent out units in Class A multiple dwellings—apartments, basically—for fewer than 30 consecutive days.

Smart, dumb, candybar, flip, and brick: a visual history of mobile phones For most of their history, mobile phones have been shrinking. Small meant portable; it even, in the not too distant past, was a sort of status symbol. Remember Motorola’s runaway hit, the ultra-thin Razr?

Like Knows Like Lucien Zayan is French. But he is also the charming founder and director of the Invisible Dog Art Center. A raw space in a vast converted factory building with an open-ended mission: to create a new kind of interdisciplinary arts center. Neither a commercial gallery nor a concept-driven non-profit, The Invisible Dog has a unique role in the New York arts scene. The Comics CurmudgeonC'mon, you could have least added a "BAM" in there » The Comics Curmudgeon Blondie, 2/13/13 Ha ha! It’s funny because … OK, you know what, I have literally no idea why this is funny. It’s funny because Blondie feels a need to project a facade of false confidence to her husband, but with her best friend and business partner she can stare the harsh truth in the face, the better to overcome adversity?

The Flight From Conversation At home, families sit together, texting and reading e-mail. At work executives text during board meetings. We text (and shop and go on Facebook) during classes and when we’re on dates. My students tell me about an important new skill: it involves maintaining eye contact with someone while you text someone else; it’s hard, but it can be done. Cloudy is a happy animated short by artists Samuel Cloudy is a happy animated short by artists Samuel Borkson and Arturo Sandoval III of Friends With You. Welcome to the clouds! From IAmOther: This animated short is an exploration into the clouds; a sweet, visual soundscape that takes the viewer through a personal journey into the sky. Sing, dance and relax as you follow a cast of clouds and raindrops through an entrancing adventure you’ll wish to take over and over again. FriendsWithYou explores animism, giving the main cast of characters a soul.

9/11 Conspiracy Theories - Debunking the Myths - World Trade Center - Pentagon - Flight 93 February 3, 2005 12:00 AM From the moment the first airplane crashed into the World Trade Center on the morning of September 11, 2001, the world has asked one simple and compelling question: How could it happen? Three and a half years later, not everyone is convinced we know the truth. Pretentious Is Not A Sexual Orientation ‘Sapiosexual’ has to be one of the stupidest sexual ‘identities’ to come along in years. New words with the suffix “-sexual” are like catnip for trendy straight people. In the late ’90s and early aughts, we collectively endured the “metrosexual,” a completely unnecessary term for a man who shaves and dares to have a few pastels in his wardrobe.

James Victore: Your Work Is A Gift What’s the value of your creative voice? A lot, according to designer James Victore. Using some of his own creative challenges as examples, Victore argues that it is only through finding your voice, your fears, and your passion — and expressing them — that you can make great work. Datalogix UK residents, click here for the Datalogix UK privacy policy. Datalogix helps marketers address those consumers who are most likely to be interested in their products and services. Our services allow marketers to efficiently provide consumers with the most relevant messaging, special offers, and discounts. The Sexperience 1000 Welcome to The Sexperience 1000, an interactive journey through the sexual experiences and preferences of one thousand British individuals. What’s the favourite sexual position of iPhone users in the North? Do country music lovers over 55 prefer to do it in the dark? Explore the 20 questions of our survey and discover what the great British public get up to between the sheets…