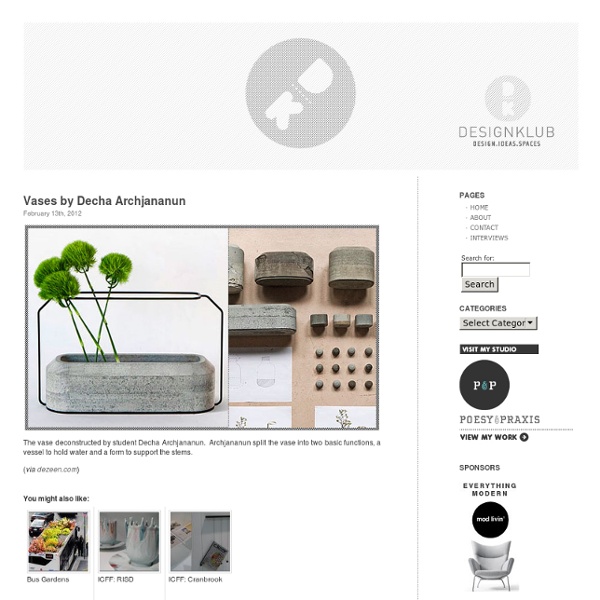 Vases by Decha Archjananun February 13th, 2012 The vase deconstructed by student Decha Archjananun. Archjananun split the vase into two basic functions, a vessel to hold water and a form to support the stems. (via dezeen.com) Google Images

Product Design This is the Wrap series journal by Cravar made with full grain vegetable bark tanned leather. The Wrap series is available in 4 colors, and two sizes; A5 and A6. The A5 can fit a large Moleskine, while the A6 fits the pocket version. Photo Inspiration Who doesn’t love baby photography, One of the most challenging and time consuming type of photography. It is easily one of the hardest kinds just because of the sheer amount of unexpected drama with the kids. It is also one of the most popular kind of photography too. You see baby photography all around. This gives you an idea...

How to be a stylish designer.  You don’t know how to dress. Fashion has no meaning to you, other than buying a pair of jeans every two years or so. You don’t get the point of wearing anything otther than black. And there you are, a designer. The Flight From Conversation At home, families sit together, texting and reading e-mail. At work executives text during board meetings. We text (and shop and go on Facebook) during classes and when we’re on dates. My students tell me about an important new skill: it involves maintaining eye contact with someone while you text someone else; it’s hard, but it can be done. Over the past 15 years, I’ve studied technologies of mobile connection and talked to hundreds of people of all ages and circumstances about their plugged-in lives.

Smart, dumb, candybar, flip, and brick: a visual history of mobile phones For most of their history, mobile phones have been shrinking. Small meant portable; it even, in the not too distant past, was a sort of status symbol. Remember Motorola’s runaway hit, the ultra-thin Razr? But something funny happened on the smartphone’s way to success.

Pretentious Is Not A Sexual Orientation ‘Sapiosexual’ has to be one of the stupidest sexual ‘identities’ to come along in years. New words with the suffix “-sexual” are like catnip for trendy straight people. In the late ’90s and early aughts, we collectively endured the “metrosexual,” a completely unnecessary term for a man who shaves and dares to have a few pastels in his wardrobe. And in the past year, we have watched the rise and fall of the “lumbersexual,” a completely unnecessary term for a man who doesn’t shave and wears flannel.

The Theory Generation If you studied the liberal arts in an American college anytime after 1980, you were likely exposed to what is universally called Theory. Perhaps you still possess some recognizable talismans: that copy of The Foucault Reader, with the master’s bald head and piercing eyes emblematic of pure intellection; A Thousand Plateaus with its Escher-lite line-drawing promising the thrills of disorientation; the stark, sickly-gray spine of Adorno’s Negative Dialectics; a stack of little Semiotext(e) volumes bought over time from the now-defunct video rental place. Maybe they still carry a faint whiff of rebellion or awakening, or (at least) late-adolescent disaffection. Maybe they evoke shame (for having lost touch with them, or having never really read them); maybe they evoke disdain (for their preciousness, or their inability to solve tedious adult dilemmas); maybe they’re mute. But chances are that, of those studies, they are what remain.

Planking (fad) and others meme A planking-like activity – called face dancing by its participants – was initiated in 1984 in Edmonds, Washington by Scott Amy and Joel Marshall.[2] The two high school age boys were walking in a park when they came upon a baseball game. They decided to lay face down in right field to see if anyone would react. No one did, but they had such a good time and laughed so much, they continued to do it for many years to come. It became a fad amongst their friends, and especially in the non-clique clique called the Myth Club, but died out after awhile. In 1994, Tom Green performed a stunt he called "Dead Guy" for a cable TV show, which consisted of Green lying down on an Ottawa sidewalk without moving. The Coronation For years, normality has been stretched nearly to its breaking point, a rope pulled tighter and tighter, waiting for a nip of the black swan’s beak to snap it in two. Now that the rope has snapped, do we tie its ends back together, or shall we undo its dangling braids still further, to see what we might weave from them? Covid-19 is showing us that when humanity is united in common cause, phenomenally rapid change is possible. None of the world’s problems are technically difficult to solve; they originate in human disagreement.

Gen Z’s relationship with tech: They don’t want to be always reachable Each generation is more connected than the last, but the latest generation, those born after 1998, wants to buck the trend. Members of so-called Generation Z are less likely than their millennial counterparts (66 percent versus 71 percent for women, and 57 percent versus 74 percent for men) to want to be “always reachable,” according to a new survey of 1,500 US residents by market research firm GfK Consumer Life. That puts them more in line with older US generations. Boomers and Gen X'ers Are Wrong to Bash Gen Z I had a front-row seat to how childhood was changing when I was a senior university administrator from 1998 to 2012. I worried about kids raised on a leash. Every year there were more and more. What was once unusual to us about Millennial behavior seemed to have become common with the oldest of the Gen Z generation.

What is camp? The Met Gala theme, explained in words and pictures — Quartzy What do Swan Lake, Tiffany lamps, and “Broccoli” feauring Lil Yachty all have in common? Ostensibly, nothing. But a thread runs through them all: the cultural trope known as “camp.” Camp also happens to be the theme of the Metropolitan Museum of Art’s much-anticipated costume exhibition, the New York City museum announced this week.