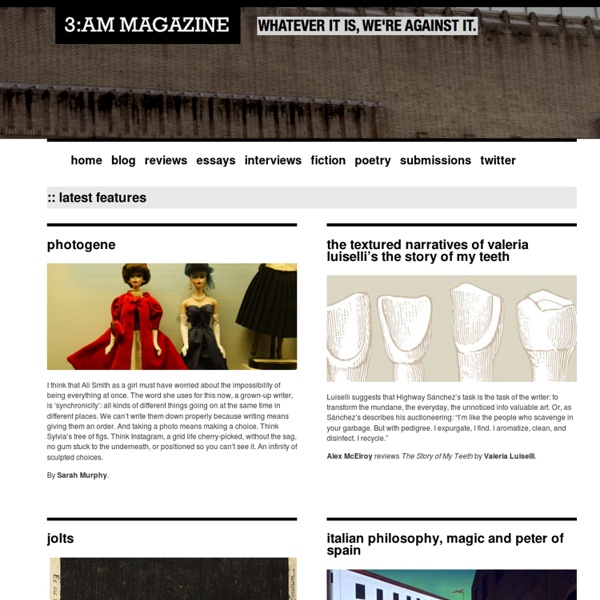 the existentialist of hard choices Maybe Sophie, in choosing between which of Jan and Eva to save from the Nazi gas chambers, was forced to do something that was not guided by reasons. When she chose to save Jan, she was not acting within the scope of her rational agency because practical reason had broken down – she had to existentially plump rather than rationally choose. Hard choices of the second variety allow responses within the scope of rational agency — you remain a rational agent as you agonize over what to do just as you remain a mathematician as you painstakingly work out the next line of the proof. In these substantively hard cases, it makes sense to continue to deliberate, agonize, ask your mother for advice, and so on. When we choose in such cases, we are exercising our rational agency, not simply plumping like Sartrean existential agents.Continuing the End Times series, Richard Marshall interviews Ruth Chang.

Page-Turner April 8, 2014 Slide Show: Kurt Vonnegut’s Whimsical Drawings Kurt Vonnegut, Jr.,’s crude, ludic doodles—a beaver, a cobra, an asterisk-anus—are famous from novels like “Breakfast of Champions,” as is the curly-haired self-portrait that doubled as his signature. But making graphic art was, for Vonnegut, a hobby that extended beyond illustrations for his fiction: he painted seascapes and landscapes on Cape Cod in the nineteen-fifties; felt-tip drawings of abstract faces on discarded pages of manuscripts; and larger, more formal color drawings that he exhibited in a one-man show in Greenwich Village in 1980. Vonnegut described his artwork as a pursuit that liberated him from the oppressive work of writing. In “Fates Worse Than Death,” he wrote, “My own means of making a living is essentially clerical, and hence tedious and constipating.… The making of pictures is to writing what laughing gas is to the Asian influenza.”...Continue Reading >>

Paris Review Daily - Blog, Writers, Poets, Artists - Paris Review Donald Barthelme would’ve been, and should be, eighty-three today. It would be an exaggeration to say that I feel the absence of someone whom I never met—someone who died when I was three—but I do wonder, with something more than mere curiosity, what Barthelme would have made of the past twenty-odd years. These are decades I feel we’ve processed less acutely because he wasn’t there to fictionalize them: their surreal political flareups, their new technologies, their various zeitgeists and intellectual fads and dumb advertisements. Part of what I love about Barthelme’s stories is the way they traffic in cultural commentary without losing their intimacy, their humanity. But I’m losing the thread. My point is not to reveal a secret wish that Barthelme was my uncle.

Books Archives The first time I read Matthew Salesses’ work was five years ago, when we were published together in a (now-defunct) online literary journal, Pindeldyboz. Matt’s flash fiction story, one of several that would eventually form his chapbook collection Our Island of Epidemics, blew me away for its mingling of lyricism, surprise, myth, and human longing. After I reached out to tell him I admired his work, we became friends, and since then I’ve followed his career closely, as he’s published the chapbook, a novella (The Last Repatriate), a novel-in-flash (I’m Not Saying, I’m Just Saying), an ebook of essays (Different Racisms), and now, his first full-length novel, The Hundred Year Flood. What I admire about Matt is how he is able to tackle different genres, different aesthetics, and different forms, all with the same insight and empathy that first captured me in that first piece of flash I encountered. Karissa Chen: I’d like to start off by talking a little bit about the genesis of this book.

An Excerpt from McSweeney’s Next Issue, Josephine Rowe Illustration: Carson Murdach Do not adjust your set. What you see before you is an excerpt from the latest issue of McSweeney’s, our alluring, laid-back, westerly sister. Curiouser still, the McSweeney’s site has an excerpt from our new interview with Geoff Dyer. Borges: Garden of Forking Paths - Author Homepage I, unfortunately, am Borges (Biography) A brief biography of Borges, with a timeline and an explanation of historical events that helped shape his writing. Games with time and infinity (Works) A complete bibliography, with a short synopsis and review of his major works.

The 25 Best Websites for Literature Lovers It’s an interesting relationship that book lovers have with the Internet: most would rather read a physical book than something on an iPad or Kindle, and even though an Amazon purchase is just two or three clicks away, dedicated readers would rather take a trip to their local indie bookstore. Yet the literary world occupies a decent-sized space on the web. Readers, writers, publishers, editors, and everybody in between are tweeting, Tumbling, blogging, and probably even Vine-ing about their favorite books. In case the demise of Google Reader threw your literary Internet browsing into a dark void, here’s a list of 25 book sites to bookmark. Roundtable - Lapham&#8217s Quarterly Elias Altman Miracles and Manure: Notes on “Revolutions” Tags: introductions, Revolutions, Roundtable, Spring 2014 It's a popular dismissal of revolutions to say that they always end in the tyranny they sought to overthrow. What use is the whole bloody mess if the oppressed becomes the oppressor? Fair enough, but the former tyranny had also ended in tyranny, and holding too dearly to the inevitability hypothesis resembles writing off the project of birth by proving the surety of death. Still, what's in between can be solitary, poor, nasty, brutish, and short, particularly in the early years of a brave new world.

Book News, Reviews, Author Interviews & Recommendations Comment Why Nick Cave joined writers' call on the government to explain Sam Twyford-Moore 8:23pm Nick Cave – the dark prince of rock 'n' roll, an Australian icon with true standing on the international stage – is not just a singer and songwriter. He's a novelist and a poet too. Mothers News back issue collection May 2010 - July 2013 click the pictures to access these issues (read online or download) via archive.org. PLEASE NOTE: Mothers News is not an online newspaper, and the following year's worth of issues will NOT be made available online. To read new issues you must subscribe, and have the physical paper mailed to you.

Top 10 Literary Websites: 2013 edition! In 2010, I wrote the most popular post on Category Thirteen, ever. I listed my Top 10 Literary Websites and, apparently, people really dug that topic — enough, at least, that they ended up on my site and must’ve told others about it. Well, it’s 2013 and I’ve realized something: I was a slacker for 2011 and 2012 (among many other things, obvi.). So, in the spirit of giving people what they want, I’ve updated my list and am pretty damn excited about it!