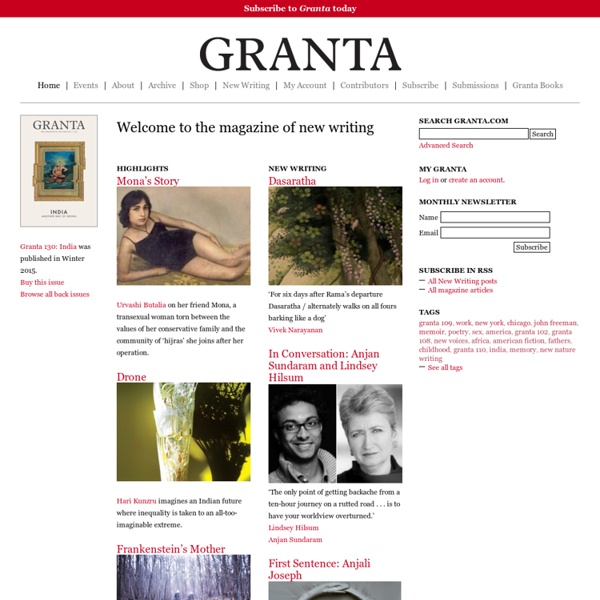 O-bakanaru ‘She’d never understood why people needed to sleep. To her, sleep seemed to be a punishment, an impossible obligation.’ Heart and Soul in Every Stitch My mother refers to it as my ‘nice Japanese bag’, which is accurate, but also tinged with irony . . .’ Spider Lilies ‘"They’re called shibitobana. Dead man’s flower," my grandfather mumbled.’ Hush. . .

Goodbye to All That, by Joan Didion : Julia Allison How many miles to Babylon?Three score miles and and ten—Can I get there by candlelight?Yes, and back again—If your feet are nimble and lightYou can get there by candlelight. It is easy to see the beginnings of things, and harder to see the ends. I can remember now, with a clarity that makes the nerves in the back of my neck constrict, when New York began for me, but I cannot lay my finger upon the moment it ended, can never cut through the ambiguities and second starts and broken resolves to the exact place on the page where the heroine is no longer as optimistic as she once was.

Page-Turner April 8, 2014 Slide Show: Kurt Vonnegut’s Whimsical Drawings Kurt Vonnegut, Jr.,’s crude, ludic doodles—a beaver, a cobra, an asterisk-anus—are famous from novels like “Breakfast of Champions,” as is the curly-haired self-portrait that doubled as his signature. But making graphic art was, for Vonnegut, a hobby that extended beyond illustrations for his fiction: he painted seascapes and landscapes on Cape Cod in the nineteen-fifties; felt-tip drawings of abstract faces on discarded pages of manuscripts; and larger, more formal color drawings that he exhibited in a one-man show in Greenwich Village in 1980.

Roundtable - Lapham&#8217s Quarterly Elias Altman Miracles and Manure: Notes on “Revolutions” Tags: introductions, Revolutions, Roundtable, Spring 2014 It's a popular dismissal of revolutions to say that they always end in the tyranny they sought to overthrow. What use is the whole bloody mess if the oppressed becomes the oppressor? Fair enough, but the former tyranny had also ended in tyranny, and holding too dearly to the inevitability hypothesis resembles writing off the project of birth by proving the surety of death. Still, what's in between can be solitary, poor, nasty, brutish, and short, particularly in the early years of a brave new world. Things have to get worse before they get better, we're told. They might also get worse before they stay worse.

Allen & Unwin - The Friday Pitch **Please note that the Allen & Unwin office will be closed from 24 December 2014 to 5 January 2015. No submissions will be assessed during this time.** Allen & Unwin know how difficult it can be for writers to get their work in front of publishers, which is why we’ve been running our innovative and pioneering Friday Pitch service for the last 6 years.

“One Christmas Eve” by Langston Hughes Langston Hughes (1902-1967) One Christmas Eve ~ A Classic American Short Story by Langston Hughes Standing over the hot stove cooking supper, the colored maid, Arcie, was very tired. Paris Review Daily - Blog, Writers, Poets, Artists - Paris Review Donald Barthelme would’ve been, and should be, eighty-three today. It would be an exaggeration to say that I feel the absence of someone whom I never met—someone who died when I was three—but I do wonder, with something more than mere curiosity, what Barthelme would have made of the past twenty-odd years. These are decades I feel we’ve processed less acutely because he wasn’t there to fictionalize them: their surreal political flareups, their new technologies, their various zeitgeists and intellectual fads and dumb advertisements. Part of what I love about Barthelme’s stories is the way they traffic in cultural commentary without losing their intimacy, their humanity.

Top 10 Literary Websites: 2013 edition! In 2010, I wrote the most popular post on Category Thirteen, ever. I listed my Top 10 Literary Websites and, apparently, people really dug that topic — enough, at least, that they ended up on my site and must’ve told others about it. Well, it’s 2013 and I’ve realized something: I was a slacker for 2011 and 2012 (among many other things, obvi.). So, in the spirit of giving people what they want, I’ve updated my list and am pretty damn excited about it! Let’s take a look my top 10 literary websites, and by 10, of course I mean 12! 1 ) The Rumpus – The more things change, the more they stay the same.

Getting Published Scam alert! We have become aware of some online activity encouraging people to pay to be included in our publications. While we are always looking for new and fresh ideas, we do not send unsolicited emails or place advertisements asking for contributors to pay to be included in books published by us. If you think you have been the subject of one of these scams we encourage you to report the scam through the ACCC's SCAM Watch site at scamwatch.gov.au.

Sunday Rumpus Fiction: Nobody Nights at the store, the brother and sister bagged the groceries that tumbled down the conveyors, rarely looking up, a simple nod of the head at a thanks from a customer. The girl, Merrill, was fifteen and quite tall for her age. The brother, Nate, was sixteen and trying to grow a moustache. He often wore a green knit hat. They didn’t talk much with the cashiers or the manager. A yes sir, no ma’am here and there.

Networks, Crowds, and Markets: A Book by David Easley and Jon Kleinberg In recent years there has been a growing public fascination with the complex "connectedness" of modern society. This connectedness is found in many incarnations: in the rapid growth of the Internet and the Web, in the ease with which global communication now takes place, and in the ability of news and information as well as epidemics and financial crises to spread around the world with surprising speed and intensity. These are phenomena that involve networks, incentives, and the aggregate behavior of groups of people; they are based on the links that connect us and the ways in which each of our decisions can have subtle consequences for the outcomes of everyone else. Networks, Crowds, and Markets combines different scientific perspectives in its approach to understanding networks and behavior.

134+ Short Story Links in Honor of Short Story Month 2012 « Flash Fiction Chronicles Thanks to all of you who suggested stories online (and off) that you love and want to share with others. This year we’ve reeled in 134 links to stories. While this is a wonderful list, it is in no way inclusive of all the worthy stories out there. Directory of Online Literary Journals A resource for readers and writers alike, the Review 31 Directory is a listing of English-language online literary journals. This listing also includes some print journals that offer significant online content. www.3ammagazine.com Founded: 2000, Paris Reviews, essays, interviews, fiction.